What sensor would detect the black stripe on an analog electricity meter?

I have an analog electricity meter (AEM) and I would like to track my usage of electricity. I've attempted to use the EE-SY310 photo sensor, but that's not sensitive enough it seems. I suspect the black stripe on the dial is too thin to be picked up. The other concern on using any photo sensor is its dependance on light (obviously) hence no reading would be picked up during the night.

Other: I've also found that AEMs work by using magnetic fields to move the dial. The magnetic field detector I used did not show much fluctuation when turning appliances on/off. The dial was pegged at the max. Therefore, I'm not so confident that a sensor to measure magnetic fields would work here, but I'm open to suggestions.

So, would anyone know what sensor would be good to detect the black stripe on AEMs? Preferably to also work without light.

I know there are off-the-shelve products that do this already, but where's the fun in that?

A low cost option is the TCRT5000 infrared proximity sensor. While this is designed to sense objects coming close to the sensor, by reflection of the infrared light emitted by the integrated IR LED, it also does very well in detecting black versus reflective surfaces placed near it.

There are two parts to making this work: 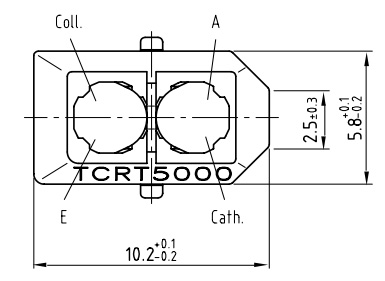 With this arrangement, the collector current through detector will dip significantly each time the black stripe passes in front of the detector.

On ALL mechanical watt-hour meters (those with a rotating disk), the disk will have either one or two holes, typically in the mid section or outer edge of the aluminum disk. Utilities used these holes to pass a light beam through (from the top of the meter to the bottom of the meter) to detect and count disk rotations. A simple light source and photo-transistor can be used to detect the presence of the disk hole to sense disk rotations.

Not the answer you're looking for? Browse other questions tagged sensors electricity or ask your own question.

1
What if Ultrasonic sensor doesn't detect object?
0
What sensor would work for soccer ball detection efficiently using Arduino?
2
What would be the best way to sense the tank level of a 1000L water tank?
2
What sensor do I use to measure the intensity of direct sunlight?
0
How to detect the direction of rotation with a sensor encoder timing disk (photoelectric speed sensor)?
1
What are the units of output of soil moisture sensor?
1
What is the best way I can detect if a ping pong ball has hit the ping pong table?
3
What kind of distance sensor are optimal to measure distances to surfaces at an angle to the sensor?