I hope this question isn't overly broad although it is more of a search for consolidated information.

I am new to the Arduino universe and am drawn in by the open hardware concept. After years of doing electronics projects with PICs, I have tired of iterative hardware prototyping and DIY printed circuit construction for small one-off projects. The lure of buying off-the-shelf hardware and doing minimal wiring on protoboards / shields is a powerful concept that I welcome.

As an example, I have found that the hardware PWM isn't always the same from one Arduino Board design to another. I find that the arduino.cc pages (including the Forums) appear to indicate that hardware PWM runs at about 487 Hz. However, my testing shows that on the Arduino 101, two of the four hardware PWM outputs run at 487 Hz while the other two run at 975 Hz. I did not find such details when researching board choices and comparisons. I am assuming that this difference may also exist on other board designs although I have only Uno, 101, and Mega2560 boards to play with at the moment.

A second example is that for at least the Arduino Uno and Arduino 101 board I have, the DC power input jack is 5.5mm/2.1mm, a very common size. However, the Arduino Mega2560 I have (third party) uses a 5.5mm/2.5mm DC input jack -- a standard albeit less common size.

Another difference is the well known differences in (TTL) RS232 port interface chips used. At least these are generally made known and documented so that you can plan in advance for differences that may or may not affect you.

Finally, I have found that on the Arduino 101, plugging in or unplugging (or turning on or off) DC power at the DC input jack (or Vin pin) forces a reboot of the Curie module on the board. I think this is caused by the use of the power management chip and power switching circuitry on the board. The Mega2560 does not show this reboot behavior whenever DC power is changed. (This reboot happens even if the USB source remains connected at all times.)

These sorts of minor differences can affect the choice of board one makes for a given project -- especially, if you develop an application on one board and plan to deploy it on another. (Example: develop on a Mega2560 yet intend on deploying on a Uno later to save cost.)

1) Has anyone come across a Website / page that details many of the minor design differences between Arduino boards? [Edit] I should have used the word designs rather than boards in this question. I realize each vendor may have tweaks to a board but was more interested in detailed differences in the "official" design. Things like above would be interesting to know -- does the board reboot on application of DC input power? Are all PWMs running at the same default frequency, etc?

2) Are there any Web resources that might at least list other "oddities" with the different board choices? (i.e. PWMs at frequencies other than 487 Hz)?

Any pointers would be much appreciated. 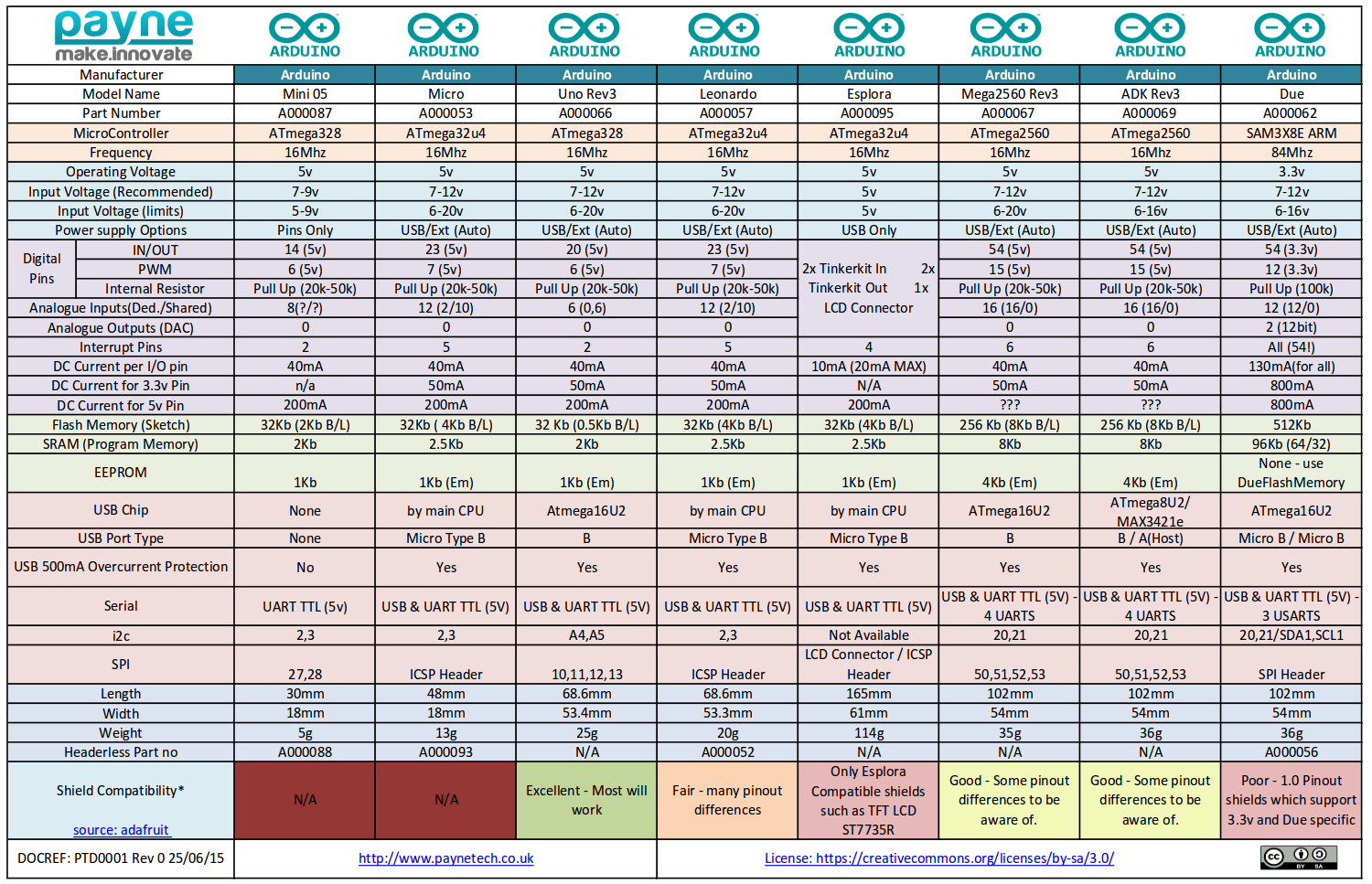 That compares some models in a way you might find useful.

The PWM frequencies can be changed over quite a wide range. I have a page about timers which describes a lot of their features.

According to the Arduino reference page about analogWrite:

By changing the hardware register you can change those frequencies. The frequency of 980 Hz is because of the compromise needed to get an approximate 1 ms interrupt for use by the millis() function:

In other words the clock speed of 16 MHz is prescaled by 64 and then counted to 256, giving that frequency.

Note that this is almost 1 ms. The code behind millis() and micros() functions compensates for that so that you get a reasonably accurate result.

By changing the prescaler, and "count to" point you can get lots of other frequencies. However if you do that to Timer 0 on the Uno (and similar boards) then you will throw out the calculations for the millis() and micros() functions (you can compensate for that, of course).

This only partly answers your question, but hopefully will provide a nudge in a useful direction.

Not the answer you're looking for? Browse other questions tagged arduino-uno arduino-mega hardware or ask your own question.

27
How can I get a unique ID for all my Arduino boards?
0
Is the supply voltage made available anywhere on the Arduino Uno Board?
1
What are the advantages of “Arduino compatible” boards
1
Arduino Hardware Issue
0
Can anyone recommend a breadboard for the new Arduino 101?
3
Mega 2560 & smoking/burning 5v requlator, probable cause?
0
Sampling rate of multiple analog pins on Arduino
0
Power Source for Arduino