I have an Arduino Uno connected to a NodeMCU ESP01 module, communicating via serial pins. The NodeMCU is powered from the Arduino's 3.3V pin. My idea is that the ESP01 receives MQTT messages, sends them to the Arduino via serial and wait for the Arduino to reply and then publish MQTT messages back.

If I power the Arduino from my computer's USB, everything works fine.

If I use an external power supply 12V/1A, the ESP01 can publish and receive "standard" MQTT messages (meaning, it does not send messages to the Arduino and does not expect a reply). It just receives and directly replies (no Arduino involved).

The problem occurs if the ESP needs to query the Arduino for a result.

The Arduino is able to read and write (I see the correct text in the console) to the serial port, but the NodeMCU ESP01 has problems publishing MQTT messages. Sometimes it does not publish anything (the ESP probably is unable to read what Arduino sends over serial), sometimes it publishes destroyed characters (random text).

It looks like the current needed by the ESP module is not high enough, but it does not make sense for me, since the external power supply should be able to provide more current than USB. Any ideas?

This is my schematic: 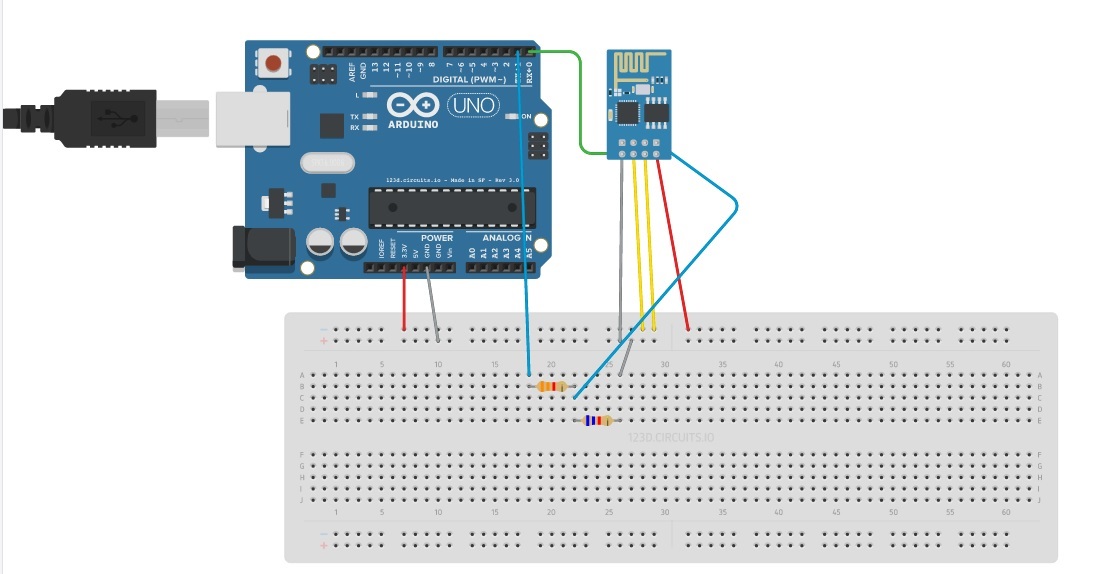 In my ESP01 I have the following MQTT onMessage listener, If the topic is a query for the Arduino (topic is validated by the handleQuery function), then the topic is sent by UART to the Arduino, which listens for specific strings in the loop function. When the Arduino receives a string, it does some logic and writes a reply back to the ESP via UART (Serial.print()).

After the ESP sends a message to the Arduino, it sets listeners for strings, that end with character %. If the reply from the Arduino is received, then it publishes an MQTT message with the result.

The reply from the Arduino has the following message format:

I have no idea why, because power supply should be able to deliver more current.

I use the following Arduino clone: eBay link

I tried to connect the ESP01 to the Arduino's 5V output with a voltage regulator (5V should deliver more current), and again, if the USB is connected, the ESP reads UART messages with no problem. If the Arduino is powered from an external power source, the ESP reads damaged characters. The only difference is that those damaged characters seems to be always the same. So perhaps some coding problems(?) or something like that.

So far it looks like a low current value is not a problem.

I removed from my code print() statement from the ESP/LUA code that I used for "debbuging". It printed to serial some messages for me. It seems that it cleaned traffic on Serial line a little bit.

Now I get most of the time correct characters, but the first character is missing, so instead of:

And from time to time I get String =]�quit%.

Perhaps some input buffer has a problem(?).

Can I just check when you plug your 3.3V ESP into a 12V power supply it stops working? Is there a burning smell when you do this? Are you using anything to drop the voltage to 3.3V?

You also say you are connecting the ESP to the Arduino's 5V supply. Normally that's not a good idea either.

Use a proper level shifter on the RX and TX lines. You probably are marginal as far as signal level.

The problem is not the voltage into the ESP8266. It is the level out of the TX of the ESP8266 not being high enough for the Uno CPU. This marginal voltage can cause messed up characters. Often we can get away with it at this level but it is really a marginal situation. It is not a reliable thing to do.

Using a 3.3 volt level signal will often work into 5 volt logic but not always. I had learned this the hard way. I designed a medium run product that used a 3.3v derived TX signal into the 5 volt logic RX input. Worked fine in 30 prototypes. But about 20% failures when running a production order. Different batch of chips resulted in different high trip point.

Just because the practice of using 3.3volt logic into 5 volt CPUs is common it is NOT guaranteed to work. Read the spec sheet! Do the math.

Not the answer you're looking for? Browse other questions tagged arduino-uno esp8266 lua or ask your own question.

2
Sketch will not start with external power source
3
Arduino Uno and ESP01: can't issue AT commands [Solved]
0
Extracting bits from hex encoded binary
3
ESP-01 won't start correctly
0
Two power source for Arduino and a relay
0
ESP-01 not waking correctly up after deep sleep
0
Can ESP8266 send AT commands to self?
0
Sporadically corrupted data returned from ESP8266