Switch between ntc resistor sensors time based for other device

We have a heating system that uses an ntc resistor to measure water temperature. I would like to replace that ntc resistor by a fixed one (low enough to disable heating) temporary on a 5 minute schedule, or any other.

It's to prevent the warm water using up all the heat and not leaving any for the central heating of the building. We got fooled by the contractor and a proper upgrade would now cost several thousands, so we just want to trick the system. ;p

The arduino is not supposed to measure anything, just to connect one of the two resistors to the heating system.

Is an arduino the right choice for that? If yes, which model? What extra elements would I need? Transistors? Relays? They shouldn't have too much own resistance to not influence the measuring of the heating system when the NTC is connected.

Just a simple connection of the extra resistor would work too because the resulting resistance would be lower and still indicate "water is hot enough" to the heating system.

Any help is welcome, even if it is not arduino based.

It sounds like what you want is a small SPDT relay (maybe a reed relay). 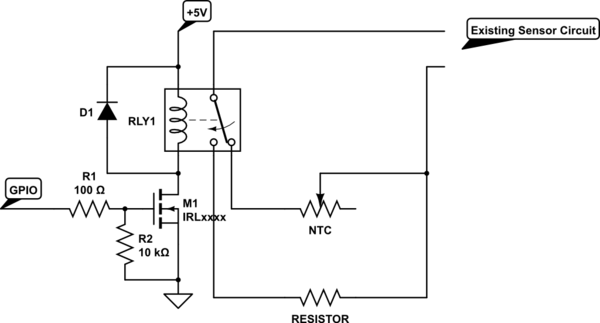 Turn on the GPIO, the MOSFET (or NPN BJT if you choose - increase R1 if you do) turns on, which energises the relay. The relay then switches between the NTC and the resistor being connected into the circuit.

1
Which arduino should i use for a very simple one pin "blinking led" type project?

1
8Ω speaker, what resistor values to use?
0
Coding force sensitive resistor to give output based on time used?
2
How can I tell the resistance of an internal pull-up resistor?