I'm building a smart shopping cart with Arduino for my final year project.

The cart is supposed to be able to follow its user while shopping. I don't know of many feasible indoor positioning systems to use.

I have recently seen some RF/ultrasonic positioning systems that make use of:

That sounds very feasible, but my question is, if the robot is in a crowded place, where the other people are also carrying ultrasound transmitters and RF receivers:

I have also read about this new device called Trackr, it makes use of bluetooth low energy to track objects based on their proximity to bluetooth enabled devices like smart phones.

Considering a scenario where various bluetooth devices (beacons) are placed at specific points in a room, and the target to be tracked is equipped with a bluetooth emitter/bluetooth chip/dongle.

When the target passes each of those beacons, the signal strength intensity is received and distance from the target is calculated.

I understand this concept, but have some questions:

Would a camera-based tracking system be better and how easy would it be for a non expert like me to implement.

I have a couple of ideas for you but know these are only suggestions. No hate please.

Have you tought of IR following?

IR is a almost unique signal that only you have. You can either use multiple IR sensors to determine where the emitter is or you can use the servo motor to do it as a radar. Note that you have to isolate each sensor so it knows where you are and it doesn't captures the wave from a different angle by accident.

You can also incorporate an untrasonic distance sensor so that the cart doesn't bump into you or any one. Like you can say, if the distance is smaller then 12 inchs / 30 cm, stop the cart. It is practically an extra safety feature.

Try keeping it simple. I'd have the person wear and infrared transmitter. Then on the cart have an array of IR-receivers pointing in all directions. That way the cart knows which direction to go.

Next you need to get the distance to the target using e.g. an ultrasonic distance sensor.

Lastly you need to add some bumper sensor, so the cart known when it's running into an obstacle.

Your camera solution might also work, combined with OpenCV. But you can't run that on a measly Arduino.

Another solution, along the lines of your camera option, would be to seed the store with Kinect (or Kinect-like) camera systems. These systems are already designed to track multiple people at once.

Using this method you don't need to equip the shopper with any device, which lowers logistics (how do I get that device back when the shopper exits the building) and tech support costs.

You might need to equip the carts with some kind of marker - I don't believe the Kinect systems are designed to track inanimate objects, but I could be wrong.

So challenges to overcome with this system would be:

I'm going to get a bit ambitious here and suggest something along the lines of what the Vive virtual reality system uses. You can see from some of the photos on that site that the headset has lots of sensors on it. Judging by this article they detect signals from two base stations. I presume the base stations send IR beams (because radio would not be directional enough). The sensors on the headset are recessed a bit, which would shield them from anything but a line-of-sight beam from a base station.

Now you don't need anything quite that sophisticated, but something like this might work. First, you have some IR transmitters located around the store, pointing in a criss-cross pattern, like this: 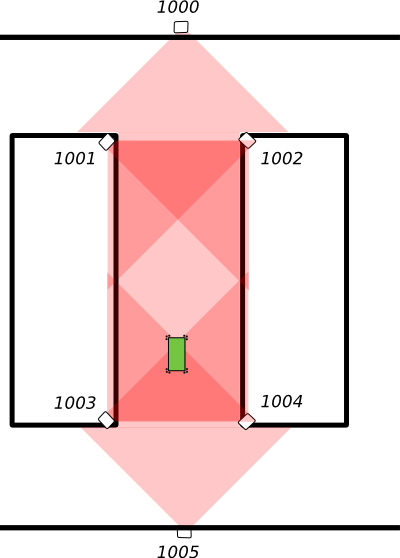 The green box is the cart and the bigger boxes the shelving. Now with sensors on the corners of the trolley, pointing in different directions, and with each transmitter sending a differently-coded IR beam, the trolley should be able to work out its position fairly accurately.

Now we can use radio transmission (from the shopper) to its paired trolley, to tell the trolley where its "owner" is. And assuming the trolley knows where it is, then it can work out if movement is required, and if so, in what direction.

In addition to the above, you would need some proximity sensors on the trolley (eg. ultrasonic) to stop the trolley from driving into other shoppers, display cases, its owner, etc.

The trolley could have software on it to solve the problem of reaching the shopper. For example, if its way is blocked for too long on the shortest path, it might take an alternative which would be to go to the end of the aisle, go down a different aisle, and then back to where its owner is.

4
Moving motion sensor?
1
Detect a non-human moving object
2
Detect movement on moving robot? PIR Sensor
-1
What would be the code for using Arduino UNO to alert by sound or LED when it detects a certain position through GPS?
0
Motion Tracking Using Arduino?
0
Detecting Motion behind a robot