I am totally new in this area. I have an Arduino mega 2560 and I have this LED RGB Strips. I would like to know if there is any way of connecting the Strips directly to the arduino. The strip has already solded 4 cables:

I don't have additional equipment. Also, I can't find anything online which uses the same type of strips as mine. Many thanks.

Those LED strips are multiple parallel chains of 3 LEDs in series, with a 150Ω resistor for each chain. The chains are arranged as common anode, and the chains are grouped into the three colours for the cathodes.

You require a power supply with enough current to supply all the LEDs (such as the 3A one supplied in the package).

Further, you require a method of switching each of the three channels, such as n-channel MOSFETs, which can handle enough current for each channel (one MOSFET per channel) - that is, 1A per channel if the whole strip takes 3A (but you can "derate" it by providing capacity for more current which helps alleviate some heat dissipation problems).

As long as the MOSFETs are logic level (such as the IRLxxx series) you can then switch them directly using the PWM outputs of the Arduino.

You can use the logic level ports to drive Logic level power MoSFET switches or use a RS85 IC to communicate to a DMX-512 interface special effects driver to RGB.

Other options include Use 5A PWM 3channel dimmer purchased on line with 12V- 14.5Vmax PSU >40W per 5m reel string . 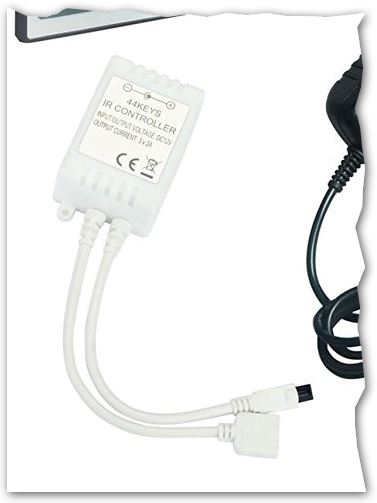 The IR controller supplied with the kit interfaces the power and provides the data signal to the strip.

The simplest way to control from your micro is to fit it with an IR (infra-red) LED and transmit the codes to the IR controller. This method also makes it almost impossible for you to damage your micro or the LED strip as the only connection between them will be by infra-red light.

Someone has probably figured this out already and you may find the complete code for an Arduino in a web search.

No. there is no way to connect those directly.

You can use Solid state relays (SSR) for this. I did it before and was able to make different colors.

You can use a couple of relays on the arduino outputs, and control it from there.