options for wireless data broadcasting to hundreds of nodes

I would like to build approx 100 arduino devices that can talk to each other, I have a set of constraints that I'm looking to get some insight on :

Which method of communication would you recommend? For the range, it seems like a 433hz RF transceiver and receiver would be appropriate or wifi could work but I have concerns about overloading the channels. Bluetooth seems like it has too long a handshake period and the range is too low.

Are there any other options I'm missing? What would be the best way to implement this?

Many thanks for you answers

So the data payload I estimate consists of :

Speed (km/ph) : ok so this will be max 3 decimal numbers, so one short int should be enough here (2 bytes)

bearing : so this will be a standard bearing, let's assume between 0-360 so another short int should be fine (2 bytes)

Lat : same as above 4 bytes

It's possible with some hackery I could combine speed, volcity and bearing into one short to only take 2 bytes. But let's assume I'm probably going to need 14 bytes, in best case 9.

In terms of Radio, the RFM69 is a good option for range, speed and reliability at low cost. A board like this one https://talk2.wisen.com.au/product-talk2-whisper-node-avr/ would have all ready to go, just add your sensors.

The link can run on 433MHz, 868MHz or 915MHz band, which cover 99% of unlicensed/open frequencies worldwide. 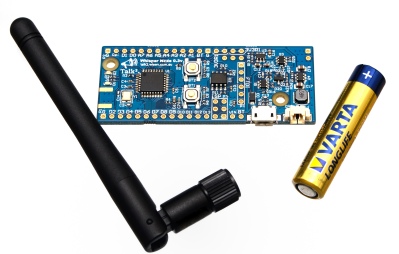 For the protocol/software you need to reduce the message as much as possible. As you mentioned, you could have 9 bytes for the payload if you "share" some bytes, which is the correct approach in this tight network. Add some 2 extra bytes for "operation/command", "sender" and "receiver". Additional to that, you need to consider the bytes added by the radio itself, like Preamble, Sync-word, Network ID, Length, CRC, etc.

The biggest challenge in my opinion would be to not have the RF network flooded with messages, causing multiple radios to transmit at the same time and messages being lost.

Let's suppose you have a total of 20 bytes for all headers+payload per message. If your network is running at 80Kbits/sec (or 10KBytes/s), that would allow a maximum of 500 message/second (2ms per message) in a perfect scenario, without considering any kind of delay between messages.

Bring down to the real-world a 1/3 link utilization is a bit more realistic, giving you a bit over 150 messages of 20 bytes per second. In other words, if the network had an evenly message distribution a node would transmit a 2ms message followed by 6ms of silence.

Now, you can't count that 100 nodes would have perfect synchronization to send a 2ms message and stay quiet for exactly 998ms before sending a message again. There are so many variables which require you to have some sort of control.

One way of doing that is by using a pooling mechanism, where you have a "tick" or "clock" node, which is the only one allowed to talk without being asked. This node will be sending "pooling" requests, a small message with 1 or 2 bytes, containing a command and the destination address, for example: 0x99 0x0A, where 0x99 is the address of the node being polled and 0x0A is the command, like "send me the instrumentation readings, you have 2ms".

Now, instead of the node 0x99 start reading the sensors, it already have it all stored in memory and ready to go, sending the broadcast message to everyone interested. The node 0x99 will also start collecting the new sensor data and preparing the message, so as soon it'll be asked it's ready to go again.

This way you can control how noise the network is and also implement other commands to capture additional information if necessary, etc.

Another implementation would be similar to the old "Token-Ring", but I believe having a master would be more beneficial in this case.

Not the answer you're looking for? Browse other questions tagged communication wireless rf or ask your own question.

0
Is this Bluetooth module cool for Arduino?
1
General Question about fast Serial Communication and Arduino
10
Choosing wireless tech for lowest possible lag
0
How to network multiple Arduinos so they react to the same signal
7
Options for communicating between Arduinos
0
Best way to send text to ESP8266 remote display
0
Wireless Communication with NRF24L01+
1
Lowest latency triggering multiple Arduinos using NRF24L01+
0
One Arduino collects data, several other Arduinos use the data. What is a simple way to do this?