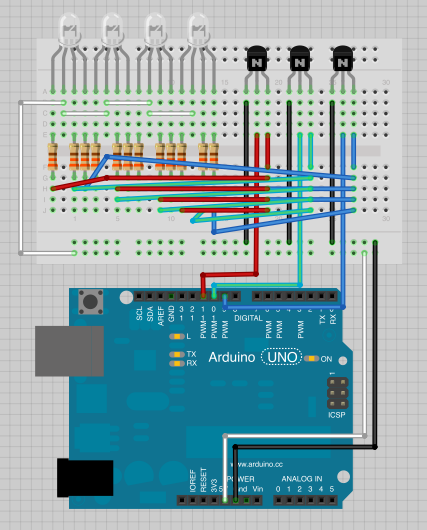 I would like to control each led individually in order to display different colors in each led. If I used the Arduino Mega, which has 12 PWM pins I could only control 4 different groups of leds using the approach mentioned above. It would be nice to be able to control them using the Arduino Uno or other boards with less PWM pins.

What would be a good solution for this? I've been taking a look to shift registers using ShiftPWM and solutions like the TLC5940 but I haven't got enough experience to tell which way would work better.

You actually have 6 pwm pins (from the silk screen notation in your picture). So you can control 2 RGB LEDs independently. If you added 4 more transistors that are used to gate the common 5v going to each of the 4 RGB LEDs you could control them in pairs. That is, you could turn on 2 independently controlled RGB LEDs and let the 6 PWM outputs control the brightness and color of each of the 2 for, say, 100ms. Then you could turn those off and turn on the other 2 independently controlled RGB LEDs for 100ms. During the switch, you would change the PWMs for the 2nd set of RGB LEDs. The draw back to this approach? You may start noticing the LEDs flickering. You may have to adjust the rate which you switch between the two pairs of LEDs. And, of course, it may not work as you expect it to.

You can use programmable RGB LEDs:

And use this Arduino software library. These types of RGB LEDs have the PWM build in. The Arduino sends out serial data to the first LED which strips off its RGB data. Then sends the data to the next RGB LED which does the same. So you can control many RGB LEDs using a single pin on your Arduino.

There is an alternative that gives you more PWM pins when using an Arduino Uno. You need a 74HC595 shift register which has eight additional output pins. By default, these pins are not PWM capable, however, with a library that I have developed they are.

You can then easily replace your analogWrite calls with something like that sr.set(i, val);. The parameter i indicates with shift register pin you want to update and val is a PWM value (from 0 to 255).

Not the answer you're looking for? Browse other questions tagged arduino-uno arduino-mega led pwm rgb-led or ask your own question.