To properly know which note I'm pressing, I built a voltage divider with 12 equal resistors (10K). One side is connected at +5V and the other end at GND, so each of the 6 strings connects the right tap to the ADC. I had just calculated the expected value w/ a bit of math considering I also needed a pullDown resistor(1M) and capacitor for every analog channel to keep the readings stable when no key is pressed. 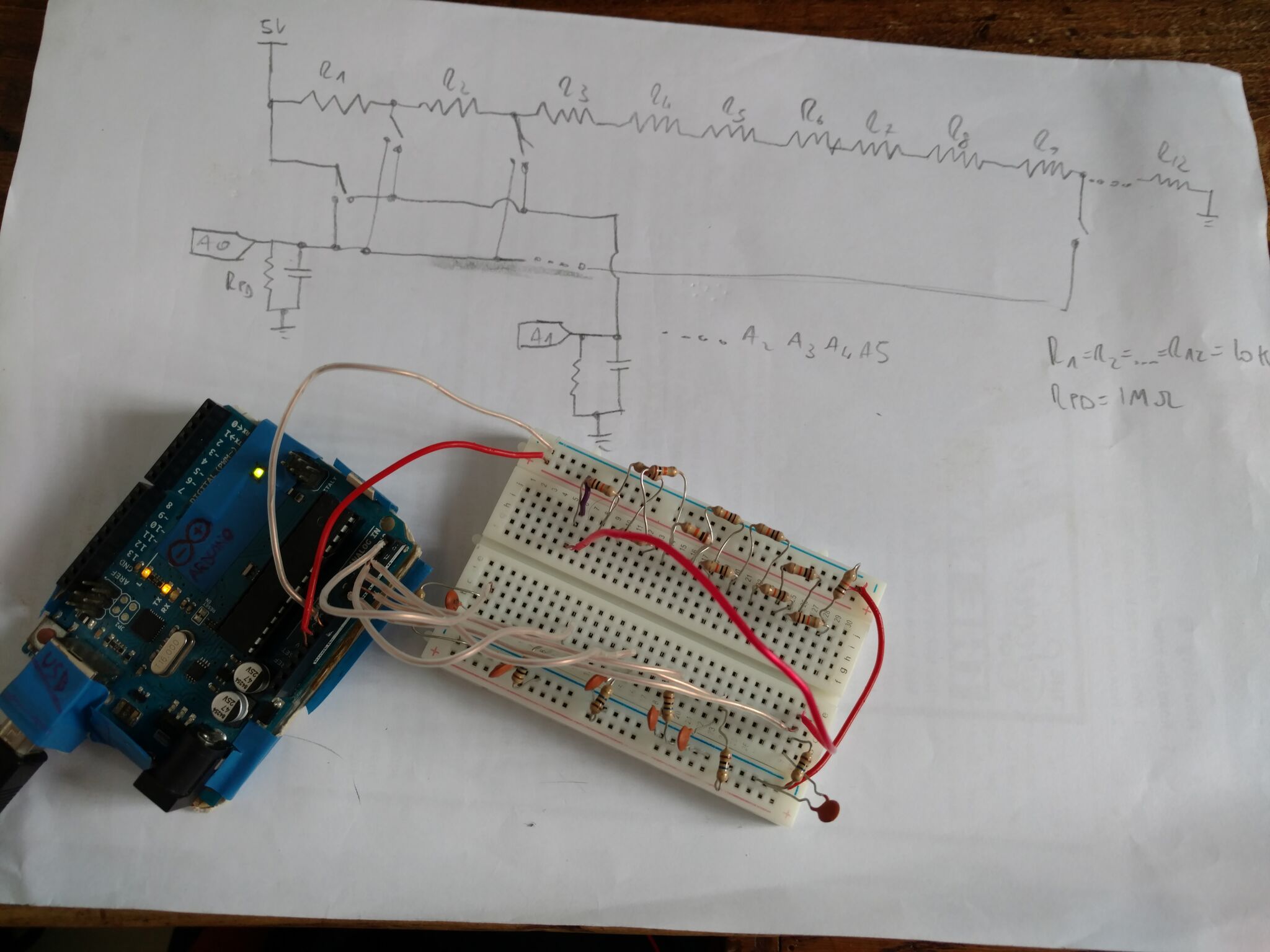 When measuring with my multimeter the readings are stable, and there are variations of less than 0.02V, and since the difference from tap to tap is about 0.4V that's quite good.

The problem is when reading the 6 channels together: channels supposed to be pulled down to gnd read voltages caused by nearby channels, readings are shaky and similar errors.
This mess disappears on one channel when I connect the multimeter to that one. Instead of buying 6 multimeters, I figured I could ask you if someone has an idea on why this happens, my guess is on the pulldown resistor, but I'm not sure about Arduino's ADC; I'm also worried about having 6 wires half of a meter each so close, so any other idea on finding the keys is welcome.

EDIT
@EdgarBonet was right, I used 12x220ohm resistors, and at first the results were absolute garbage, then I made it so the code would read each channel about 10 times, discard the readings, wait a millisecond and finally read and store the value. Now it is perfect. Thanks again.

The datasheet of the ATmega328P (the main chip of the Uno) states:

The ADC is optimized for analog signals with an output impedance of approximately 10 kΩ or less.

The Thevenin equivalent output impedance of most taps of your voltage ladder is higher than 10 kΩ. You 1 MΩ pulldown is way beyond that limit. Cross talk from previously read channels is exactly the symptom you expect from excess output impedance.

Taking each reading multiple times, until the value stabilizes, should help. A buffer (e.g. an OP-amp set as a unit gain amplifier) is the usual solution to this kind of impedance problems.

Actually, the whole works perfectly with R as 220 and pull downs as 10K. The problem comes when connecting more than 3 strings at the same time, on any tap, as the pull down resistors become part of the ladder (i belive).

The pull down resistors will indeed have an effect on the potentials of the voltage ladder, especially if you connect several strings. This could be minimized by having the pull-downs be a lot more resistive than the resistors along the ladder, but then you would need very low resistances along the ladder, which is not desirable because of current consumption and heating.

Here is an idea for an alternative solution: If you can spare 6 digital pins, you could build for each analog input a pull-down circuit that is switchable between a “strong pull” mode and a “weak pull” mode. Assuming D0 is the “pull strength control” pin for A0, it would look like this:

Whenever you want to read A0, you:

If A0 is not connected to the ladder, then the first reads will discharge the internal sampling capacitor of the ADC. The final read is done with only a weak pull-down, but this should be OK since the capacitor has already been discharged.

The potentials along the voltage ladder will be disturbed by any string connecting a tap to its strong pull-down, but this disturbance will disappear when you switch to weak pull-down, so it will not affect the readings.

Not the answer you're looking for? Browse other questions tagged arduino-uno analogread adc or ask your own question.

0
AnalogRead always 1023 on Arduino Due?
1
Trouble reading V_BG
4
Usefulness of measuring 0v using ADC
1
Implementing an external ADC in Arduino
5
Why is my Analog Input channel adding voltage to my signal?
1
Extremely unstable analogRead() on Arduino Nano when powered from an external source
0
Inaccurate voltage readings on an esp32 as opposed to multimeter