Why have resistor at end of circuit cycle if GND dissipates final energy?

The first challenge on the Arduino Uno manual is to make a closed circuit with a button and LED. The voltage is provided by the 5V pin (non IO), connected by wire to (+) on the bus (breadboard). The wire connects to a resistor, which makes sense since it resists current running from source. The button connects to the resistor, if pushed, the button closes the circuit and current passes through LED (making it shine) and through a wire to GND.

OK. The second challenge makes no sense. The resistors are connected not to the 5V, but the GND. WHY? Doesn't current dissipate past at ground?? As if the GND is supplying power!? It's like flipping the anode/diode! Here's the challenge:

.What is the logic behind connecting the resistors to GND and WHY DOES IT SUPPLY POWER? I'm not talking about the button, which step two somewhat explains but not why, but the LEDs. Thank you thank you thank you!!

EDIT: Ok, then. I am now being told current flows negative to positive. Fine, then why resistor connected to positive? Also, I was told that GND is there to dissipate the energy flowing from positive because some of that energy was lost. Then, could you explain the circuit and whether flow is perpetual or lost at the end (wherever that is) and if it isn't perpetual in a loop, why have a resistor past the LED when the LED recieved all the volts and the electrical energy it then outputs back on the cycle is reduced by the resistor. Thanks.

Also, I'm changing my question to "Why does resistor on GND ever work on LED" to "Why have resistor at end of circuit cycle if GND dissipates final energy?".

Some images may help, other answers so far are quite good. You need to realise the concept that electrons are flowing in a circuit, with series it doesn't matter which order, so in the following schematic, the first 2 are the same and both work in exactly the same way, the 3rd functions the same but obviously uses 2 resistors instead of 1, It is there to help you understand the concept. The resistance of R3+R4 = 1K so the same amount of current flows through D3 the 3rd LED as D1 and D2.

Do you know Ohms law and about voltage drop ?

Also how to calculate resistance in series and parallel ?

There is some fairly simple maths that shows the 3 different legs are all doing the same thing, however it may over complicate things at this stage if it is above your knowledge as you state you are in middle school. 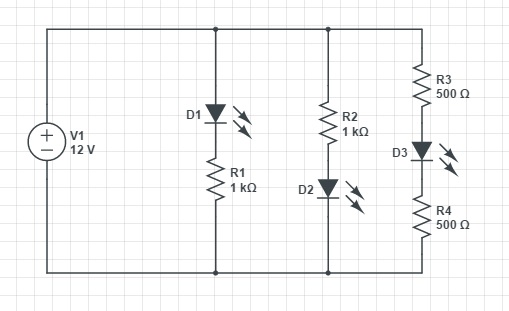 Roman, As I understand your question you have a resistor, an LED and a switch in "series". It makes no difference in which order these are connected. It may help to think like water flowing through a hose, with a tap being a switch - it can be at either end.

"Current" flows through each in turn. As others have mentioned current conventionally is considered to flow from + to - (even though in most, but not all, cases electrons flow from - to +).

In practical circuits it is usually more convenient to select one configuration over another. An Arduino digital pin can be considered as a switch which is either connected to + or -. You could connect a LED (with a current limiting resistor) to either + or -, either is valid it just changes the logic controlling the switch.

To go further with the water analogy as proposed by @Milliways, consider the water system being closed and made of hard pipe (which cannot expand or contract). All of the water (electrical charge) there is, is contained within the closed system. (We'll use a battery instead of a power supply for clarity but it won't make any difference). Think of a simple loop containing a pump & small reservoir (battery), a small turbine or water motor (the LED or most any other electrical load), and a resistor (a constriction somewhere in pipes).

It won't matter where you put the restriction; it will still reduce the flow in the entire loop and therefore, through the turbine, reducing its mechanical output. Even if the restriction is on the return side. Why? Because the same amount of water has to flow past any point in the system, as flows past any other point. If that were not true - the water flowing toward any point != the water flowing away from that point, then there must be either a leak or a water source (loss or gain of water) at that point. Since we believe there is no leak (short circuit to ground) or source of water (battery), then water flowing in must == water flowing out at any point. So wherever you put the restriction (resistor), it limits the flow (current) through the entire loop, and the turbine will do less work.

If say, 3V are lost/used in the circuit one way, then 2V isn't enough to power, right?

1
Which side should I connect the resistor on?
0
How much current and voltage has my resistor + LED
0
Use of Resistor in PinWheel Exercise
0
Driving multiple LED arrays with shift registers
1
Why did my pushbutton LED circuit work when my wiring was wrong?
1
Arduino Nano LED not working
0
Why does a pull down resistor configuration not destroy the pin it's connected to?
1
LEDs not lighting up even though current is flowing through them, problem with ground?