Powering a 12v lock with batteries, via WiFi, and with low energy consumption

I'm a complete newbie in anything related to electronics, software or hardware; yet with a couple of friends we're going ahead with an interesting project related to automation through wireless devices: more or less IoT but involving electric locks.

The case scenario: there's a room without any power outlets. It has a regular door. We want to be able to open this door through the internet, with a lock that lies inside the room, on the other side of the door; all this, given we:

We've planned, so far, to use an Arduino Uno; enhance it with WiFi features (i.e. a module or shield) so as to bypass the limitation of not being able to connect an ethernet cable; and glue a solenoid or lock to the inside of the doors, so that it acts as a second lock that can only be unlocked through the internet, accessed via Arduino.

Our ideal scenario would be opening this door remotely, from our home, even if this door is a hundred blocks away. If someone wants to get in, they should ask for our permission, as we don't control the built-in handle, but we do control a latch fixed on the inside.

All this setup should be powered with a long-lasting battery: we can't plug anything, and we can't risk getting our batteries depleted fast, because we'll never be able to open the door once again. We need these batteries to last long enough so as to be able to change them in a prudent time window; a back-up battery system should also work well.

Standard solenoid locks are 12v. Arduino powers 5v devices, not 12v ones, as far as my understanding goes.

We should open this door only 5 times a day. That's it; the remaining time in between, the whole device setup can well stay 'dormant', in low-energy consumption mode, only to 'wake up' when we give the order: "Arduino, please tell the solenoid to open".

We haven't specified which battery we would use; ideally, the most cost-efficient option. If it lasts 3 months and costs, say, 20 dollars -- well, we would love that.

I've done this really inaccurate, schematic drawing to illustrate our idea and research. I know there's many details missing but I wanted to prove our point: 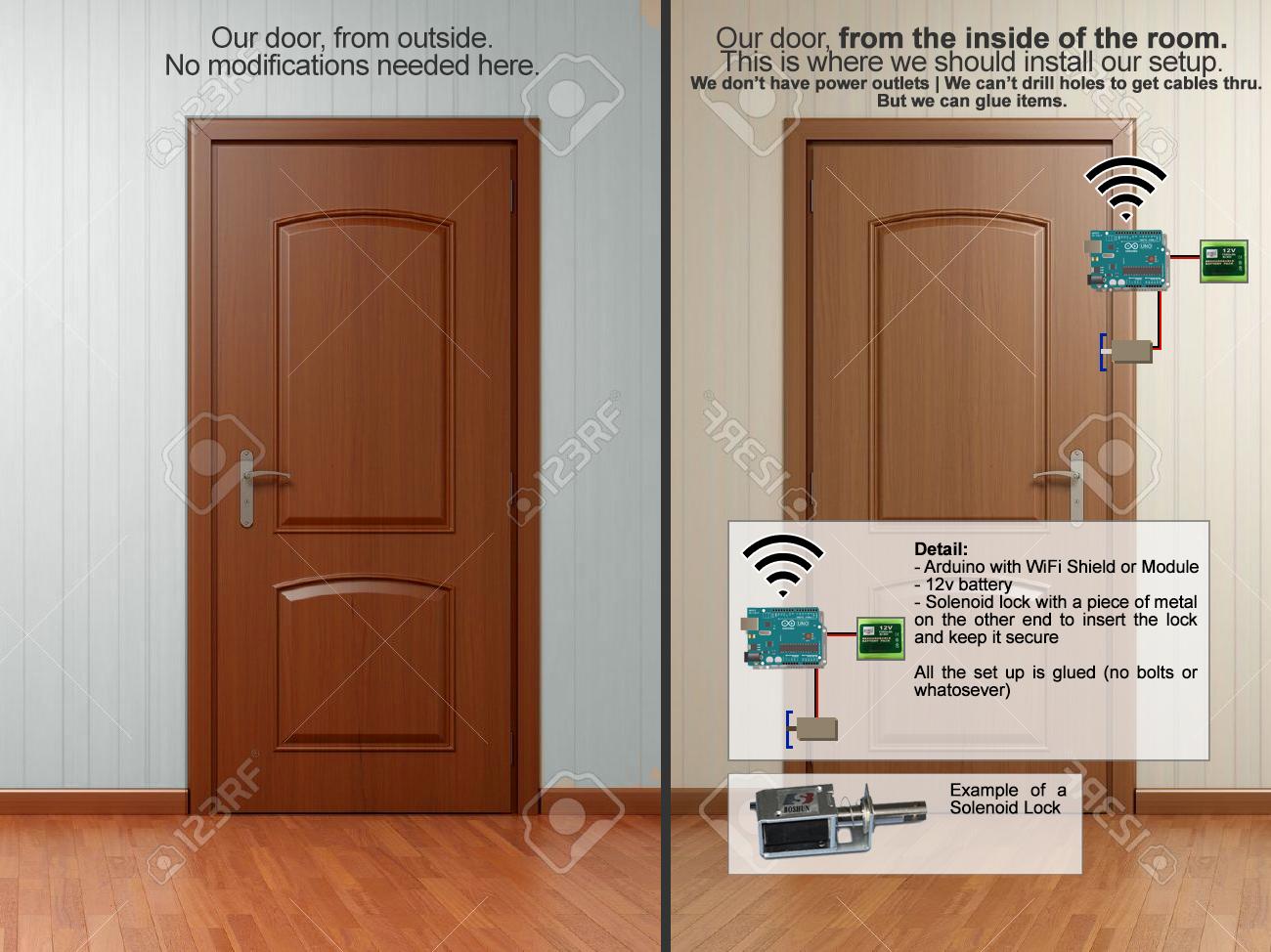 (The Arduino should be positioned on the wall and not on the door! My bad.)

I hope I'm clear enough up to now.

The questions, then, are:

I've done some research, and I've seen that Arduino can be enhanced so that it consumes the minimum possible energy so as to remain 'aware', but not in full-power mode, which in our case would be unnecessary.

I'm a newbie, but can't Arduino power 12v through a relay or a transistor? Can't post links.

To clarify: Getting two batteries for our complete setup (one for the Arduino, one for the solenoid), if these two batteries both last, is not a problem; but it would be catastrophic to make a battery last long enough while the other depletes in 48 hours. The solenoid needs to get electricity a modest 5 times a day; that's why I believe we can make it super efficient.

With our friends, we've so far programmed Arduino to open a solenoid from the Internet. The solenoid we've used was 220v because we had it in stock; it won't be what we need for our project. It was just a trial. On top of this, the Arduino has no WiFi module, just an Ethernet shield. 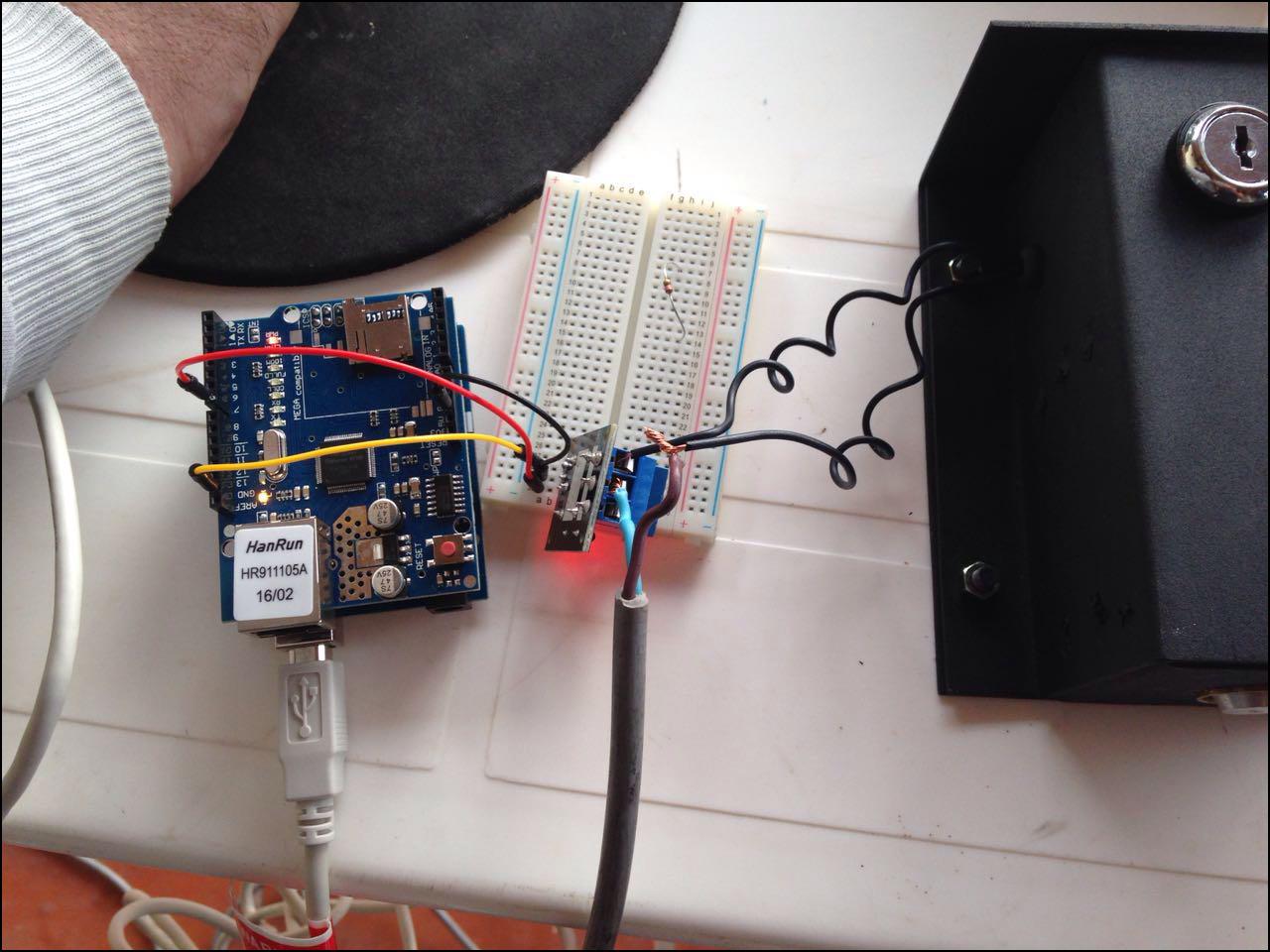 There's a remaining problem to solve, which is: what would happen if the Arduino fails? The door would be sealed 'forever'. We'll tackle that issue afterwards.

TL;DR: we'd love to open a lock via WiFi: the lock and Arduino should run solely on batteries that last more than 48 hours: a couple of months would be ideal! Can we work this out?

Thank you very much for your help, opinions, and time. I hope my question is up to the standards.

[I'm coming in late but since this question got reposted, here goes:]

If this not to be just a Proof of Concept, but to be actually installed, you really have to address the several points of failure (Arduino, Arduino power, solenoid, solenoid power) that could lock you out of the room forever ("ever" being the time needed to fetch and apply destructive tools :).

Assuming it's a POC, here are a few more ideas:

This is not the place to answer all the questions and design options that you have, but, to give you a starting point, you need to look at very low power arduino-compatible boards.

My suggestion is to use an ESP8266 module which can be programmed as an Arduino (have a look at here). The module is quite low power, and it may run for some days with AA batteries. You can use a 12V power source for both the module and the solenoid (you need a voltage regulator). The solenoid will only be activated when needed, so the rest of the time it won't consume any power.

The whole project is not a simple one. I would definitely suggest you to go step by step.

As far as the 12V motor is concerned, you can construct a decent H-bridge to shift polarity. I am assuming you are using a linear actuator or servo. Use a mechanical relay with 2 channels. Wire GND to NO1 and NO2, VCC (12V) to NC1 and NC2, and pull VOUT to motor from COM1 and COM2 - IIRC - and in your code track state of when each channel is on or off... It will short out if both relay channels are ON simultaneously, so that must not be possible.

Mechanical relays are slower to switch than transistors (can haul 230VAC/30VDC/10A with no voltage drop), but if you want a transistor H-bridge use the rather old TIP120 NPN Darlington (0.6-0.7V voltage drop per transistor), or MOSFETs. At least the TIP120s require heatsinking for >=0.5A, but can drive 5-6A upto 60V, which is plenty.

As far as the wifi bit goes, I don't have enough experience. I would use a GET request to a web server/page and read what state the lock should be in at short intervals... no more than 5 seconds. A simple '1' or '0' in a text file will do. To output state, heartbeat (is the Arduino OK right now, or is something wrong?) and other stuff from the Arduino, use POST requests. You should use a simple database for this... PostgreSQL is my favourite, but you may want something simpler.

If you need precise timekeeping for events like open at 9.00 am, use a DS3231. Be careful to conserve SRAM, the Uno has only 2KB. There are guides on arduino.cc to help you with that (PROGMEM for immutable variables and the F macro for static strings). This is a good method, hope it helps.

Not the answer you're looking for? Browse other questions tagged wifi battery home-automation or ask your own question.

1
Determining power consumption with Arduino and JeeLib
4
RTC interrupts and coin batteries
1
How do I power my Arduino Micro directly?
0
How to power Arduino and shields with 4 rechargeable AA batteries?
0
Battery life with Nano v3
0
Adding WiFi to my Arduino Keypad Lock
0
How can I measure if a battery is there?
2
Powering a system using batteries
0
Powering Arduino Components with AA in Parallel and Series