I am used to relays some, and they are useful, especially for large loads like a incandescent light bulb or other 120V AC device. However, it seems like overkill to use a relay for a bunch of LEDs linked together (parallel) that use 60 mA (too much for the Arduino). Also, it wouldn't work if you wanted to turn it on/off frequently or do PWM. I've heard some about transistors and MOSFETS and know a little about them. When should I use each one and how do I know what type to get? Also, it seems like relays can be more expensive than transistors/MOSFETS.

Edit: How can I use these with my Arduino?

Transistors (such as Bipolar Junction Transistors (BJT)) are solid state switchers, that is, they don't have any moving parts. Metal-Oxide-Semiconductor Field-Effect Transistors (MOSFET) are also transistors, but are voltage controlled, whereas classical BJTs are current-controlled. Relays are more expensive, but they have moving parts.

BJTs and MOSFETs produce a lot of heat (with high currents). They both have three pins (usually) called the base, collector and emitter (in the case of BJT) or gate, source, drain (in the case of MOSFET). More info here

Relays use a magnet to control the position of a metal switch. They generally take more power than an Arduino pin can deliver, and therefore they are often controlled by a transistor. Relays can usually switch more current than either a transistor or a MOSFET.

There are also Solid State Relays (SSR), which have a triac (a device similar to a transistor) in them. These can't switch as much as a normal relay, but they generally have better ratings than MOSFETs and BJT. example 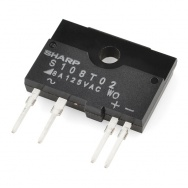 Big differences between relays and transistors are:

If you want to play with arduino, you definitely need to know about transistors; using relays is more akin to special applications.

Not the answer you're looking for? Browse other questions tagged relay mosfet transistor or ask your own question.

2
Driving power MOSFET from 3.3v or lower Arduino Pro Mini
4
How to implement a 2D lookup table?
1
Use MOSFET to Change Voltage With PWM
1
Timer to control 1.5V clock
0
HC-05 and p-channel mosfet
1
Read encoder output by using an optocoupler