I have an Arduino Uno that I've been programming with an AVR Dragon through Atmel Studio 7.

I did two things in close proximity, and I'm not entire sure which action is the culprit. I tried using the DebugWIRE interface (for the first time) instead of ISP in the tool select screen. I also hit the Arduino's reset button as Atmel Studio was compiling/uploading to the Arduino (stupid, I know.)

Now I cannot program with ISP the normal way, or do anything really. If I try to upload to the Arduino I get:

I've tried to use the device programming feature using the Dragon and change the fuses as I've read about in other posts and get: 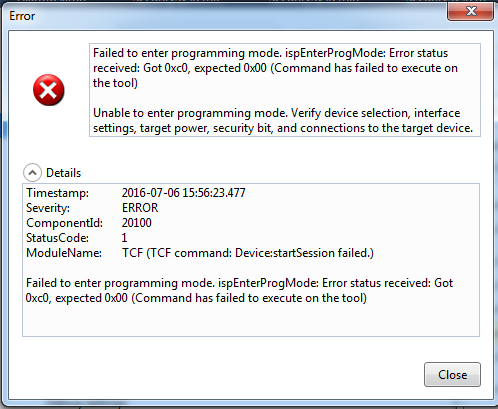 I've tried burning a new bootloader with the Arduino IDE and the IDE tries ten times, but it tells me that the programmer is not responding.

When I plug my AVR ISP mk2 into a different Arduino Uno I get a nice constant green light. If I plug it into the board I've been discussing it blinks red.

I'm not sure where to go from here...

I think either the chip or the board is fried. Try swap the chip (only the chip) to the other board and retry loading the program.

Not the answer you're looking for? Browse other questions tagged avr or ask your own question.

0
Arduino Mega 2560 as ISP for ATTINY2313 / ATMEGA328P
1
New to Arduino: Should I learn C, C++ or both (C & C++)?
0
Is the Arduino bootloader really the Atmel bootloader? Can I use Flip to upload?
0
Using Atmel Studio with Arduino Starter Kit (Uno MCU)
0
Arduino uno board not detected when connected via USB no matter what OS
1
Trying to make sense of the coding style in Arduino libraries. (Particularly the Radiohead library)
0
Uploading Firmware to Atmega1284p using ESP8266 with AVRISP as programmer
1
Problem with programming digispark ATtiny85 board with Arduino IDE