So I`ve got that mouse with serial connector. It is named serial so it should be easier to connect than even a ps2 mouse, right?

I can`t find any instruction on it. Or should I see instruction on ps2 mouse and plug in the same wires? Btw mouse has only 4 wires connected inside, as usual PS2 mouse. I want to connect it the same way as ps2 mouse to get easy readings of rotary encoder. 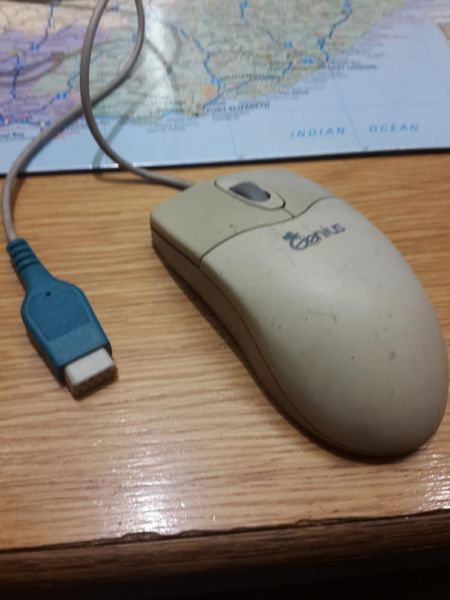 UPD1: I`ve tried to connect it like a PS2 mouse according to this schema with no success. So either a mouse is dead or it uses some kind of different connection?

A serial mouse is designed to connect to a PC's true serial port - it's an actual RS-232 device using ±5V. As such it won't connect directly to the Arduino's RX/TX pins, you'll have to go through an RS-232 transceiver chip.

It also gets its power from the RTS line, but I never knew what the current draw of one of those things was - be careful trying to power it from the Arduino!

Other manufacturers added things like extra buttons and scroll wheels that didn't fit in the packet structure. So they modified the protocol, but stuck with some features of the original:

Not the answer you're looking for? Browse other questions tagged serial rotary-encoder mouse or ask your own question.