I am trying to connect to my Arduino Uno board two temperature sensors: DHT11 and DS18B20. The problem is with the DHT11 sensor: apparently there's an error with reading the temperature every two measurements.

Here's what I get on the serial monitor (temperature 1 is from the DHT sensor): 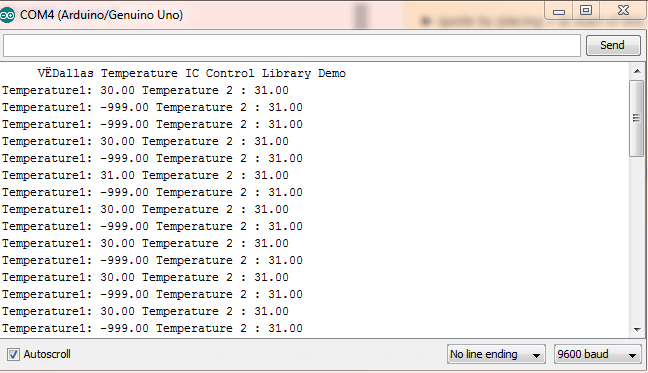 As I am new to this, I was wondering what the problem may be. I have read about the one wire interface used by the DS18B20, but I noticed that the DHT is not using the same protocol.

If I use the DHT11 alone, it works perfectly fine.

Also, I am using 4k7 pull-up resistors for both sensors.

There appears to be several DHT sensor Arduino libraries available:

You might try an alternate library to see if that solves your current problem. Note, some if not all of these libraries need to know which DHT model you are using.

Before going through the DHT and OneWire source code line by line looking for conflicts, try to narrow down what is causing the problem:

This is a test case only and an extreme measure. What you are doing here is re-initializing the DHT library (driver) every time you use it. If this works it points to an initialization problem where the DHT library is initialization something which should probably be re-initialized again inside the DHT read method. As the OneWire library is using the same "something" (resource).

One last thing, the OneWire example I looked at here: PaulStoffregen/OneWire ...did not use the DallasTemperature library. I doubt this will make a difference, but it is usually best to keep your code simple and avoid unnecessary complexities.

In this DHT11 library, there is code:

...which returns the last good value for 2 seconds after a DHT11 "real reading" should the library user call upon it faster then the DHT11 can respond.

DHT11 can only be read every 1 second. See manual.

To confirm the answers above, in my case https://github.com/adafruit/TinyDHT library worked fine with Arduino Uno, while http://playground.arduino.cc/Main/DHTLib refused to work. Same setup with DHT11 and DS1820.

0
Weird OneWire bus problem
0
DS18B20 - Temperature a bit off?
1
Problem with a DHT11 Temperature & Humidity sensor
1
Why a servo doesn`t move to angles properly
1
Arduino Uno + SIM808 EVB 3.2.4 not working properly?
1
having problems with my arduino bluetooth car project(with L298n Motor Driver)
2
How do I add Gyroscope, Accelerometer, Euler, and Temperature data to one Arduino board?