I'm trying to run a neopixel strip and an arduino from the same power supply using a voltage divider to get 5V to the strip.

Here are the values for my voltage divider:

When the divider is connected at its inputs but not at its outputs, I measure the expected 4.8V across R2. But as soon as I connect the neopixels, I only get about 1.6V.

Could anybody explain this || Suggest a possible solution? 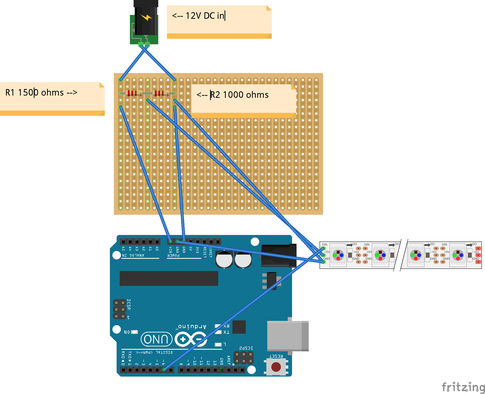 Since you are connecting your pixel strip in parallel with R2, the correct formula is

Where Rp is the resistance of the pixel strip and

is the combination of R2 and Rp in parallel. From this you can see that an output voltage of 1.6 V is consistent with a strip resistance of 300 Ω.

This is, however, somewhat oversimplified, as the I(V) characteristic of the LED strip is probably non-linear, thus not really equivalent to a resistor.

Not the answer you're looking for? Browse other questions tagged voltage-level neopixel or ask your own question.