I'm building a word clock and its a grid of 20x20 letters, each with its own LED (I know, its absurd for just a clock). I've recently got the LED's on a strip. Its the WS2812B type, just like the neopixels. There are 3 rolls of 5m strips and a single 1m strip. When I tried to power the 1m strip, everything worked perfectly and all looked quite lovely. But when I tried the 5m strip (just one of them), this happened: https://www.dropbox.com/s/5w1lok6wa7dfvzd/IMG_0046.MOV.mov?dl=0

If you didn't see the video I recorded of it, for a second or two after powering the arduino (uno) on, it works as expected but not long after it all stops the colors and fades to red, sometimes it just instantly jumps to it, like the second time in the video. I don't know what happened but all I can guess is that the arduino is not able to power the strip properly. Any ideas on what I should do to be able to power a total of 16m of these strips?

Each led package has three colored leds inside; Red, Green and Blue. Every color will use around 20mA when fully turned on.

So you can only turn on 5 colors at full brightness at 500mA.

This would be more than enough for a word-clock, as most leds will be off.

You're trying to power a consumer which draws more current than the arduino could provide.

To fix this, you need an transistor and a ~5V battery (e.g. 4.8V NiMh, or a stronger batteries plus suitable resistors, to not burn out the leds)

Look at this (awesome paint) shematic to understand the principle. The arduino will switch the transistor through S2 which then closes the circuit. Through S1, the arduino can set the LEDs values.

Note that for savety, you should also set a diode between S1 and the LEDs, so the battery cannot burn out your arduino, if the LED strip is cheap made.

The reason why the behavior at your setup differs might be because of a capacitor on the arduino which works similar to a batterie (With extreme little capacity). The capacitor might provide enough power to run the LEDs for a very short periode. After discharging, the capacitor needs some time to recharge and thus it may vary in effect. 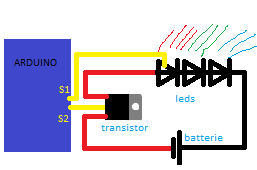 Not the answer you're looking for? Browse other questions tagged arduino-uno power led rgb-led or ask your own question.