I made this exact build on my Arduino, with the following differences: 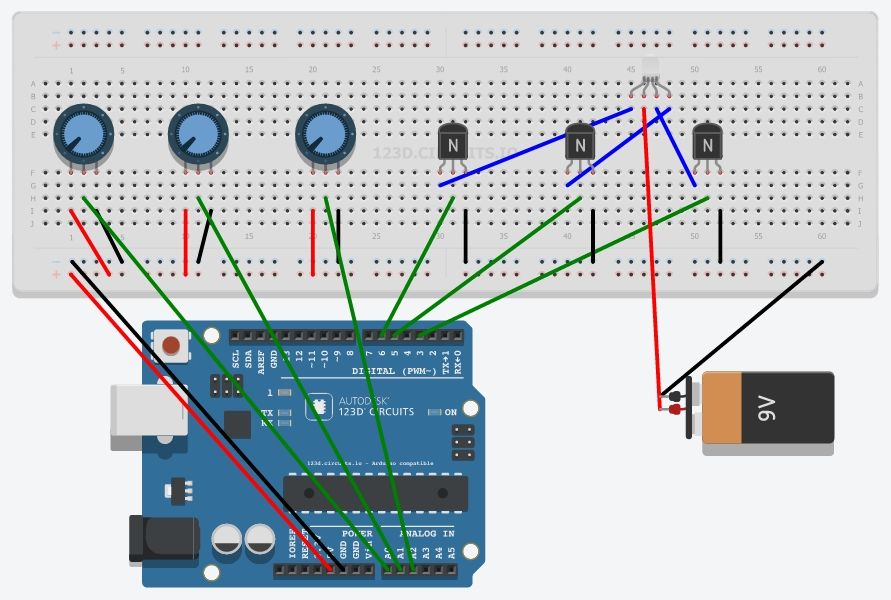 Here's what happened. First, it started to get strange voltage, arduino would light up even when disconnected from power. After that, Arduino kind of got fried, when I connect it to USB, nothing happens. I can give it 6v to VIN and ground it with the rest, but turning potentiometers only dims the onboard LED of the Arduino and that's it.

Now I'm going to go and pick up a new nano, however, I'd prefer not to fry that one, so figuring out why this one burned would be nice.

First, as Majenko said, you need resistors between the arduino output pins and the transistor bases. Start at something like 330 Ohm. Second, what is the value of the potentiometers? If it is too low you would be drawing too much current from the 5V pin to the ground. Third, you should power the arduino with at least 7V, assuming you power it through the Vin pin or the power jack. 6V is considered too low. I assume the pins connected to the potentiometers are initialised as inputs. Otherwise, it would be possible to burn your arduino by having them source/sink too much current (i.e. by turning the potentiometers to one end or the other).

Looking at the datasheet for the 2N2222A at http://www.onsemi.com/pub_link/Collateral/2N2222A-D.PDF The 2N2222A base will draw 50 ma at 2volt. You are giving them more than that. The maximum allowed output from the Arduino is 40ma. So check the 2N2222A's they are probably burnt out as well as the Arduino. Next time put in a limit resistor of 1k to the 2N2222A bases. Try pulling out the 2N2222A's and see if your Arduino powers up ok.

Not the answer you're looking for? Browse other questions tagged arduino-nano rgb-led or ask your own question.