I seek to call an ISR routine after a fixed time of 400us. This action needs to be done every now and then (in the range of 0.8-3.0ms). For that matter, I thought I'd set timer2 to CTC mode, use OCR2A to set some TOP value for 400us and let the timer call the ISR routine after 400us. Within the ISR I would then stop the timer from triggering interrupts, until I need to count to 400us again, where I would activate the timer interrupt again.

This works, as expected, except for the fact, that after activating the interrupt for OCR2A again, it instantly triggers. The code below, produces a 1ms alternating signal, instead of 1ms+400us.

My question is, am I on a good way with this, or should I use the overflow ISR and preload the timer? Or any other method? The problem is, that after the 1ms waiting time in the main loop, I'd expect the counter to count from 0 to 100, meaning 400us. However on an oscilloscope I see the pin toggle each 1ms.

However on an oscilloscope I see the pin toggle each 1ms.

That's what you expect. You set up the timer to fire every 1 ms. Since the ISR is called some time after that (and that is what toggles the pin) you will see the pin toggle every 1 ms.

I've reworked your example a bit to make it clearer, and to toggle the pin when we start the timer, and again when the ISR fires:

You can see from the scope output that the timer is started every 1 ms (as expected) because Cursor 1 is at -1 ms. The width of the pulse is 400 µs, as expected. 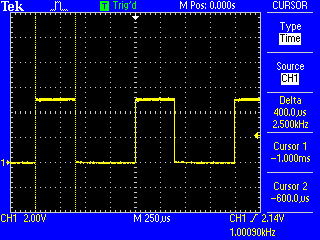 In my example I do not have to set so many settings each time I want to start the timer.

I took out the cli and sei so I saved you two lines. Don't forget to count them!

If you leave the timer running, it may well have reached the counter again (even though not generating an interrupt). Thus this line is important (even more so for you):

Also, if you leave the timer running, you may have a race condition. Say the timer is just about to tick over and generate the interrupt. You clear the flag (as shown above), but one machine cycle later the timer reaches the counter and sets it again, just before you get a chance to zero it. With the timer running, there could be combinations of when you enable interrupts, zero the flag, and clear the pending interrupt flag, that could occasionally work against you. Having the timer stopped is much safer.

Now if you are worried about the number of lines you need to start it (I wouldn't be) then you can move this line into setup:

Since you stop the timer in the ISR it doesn't matter if the interrupt is still enabled. Now you just have three lines to start the timer:

I think we've agreed that clearing the compare flag is important, so this isn't any lengthier.

looking at your divisioning of the time axis, and from code, it is clear, that there is a 600us break, not 1ms!

I seek to call an ISR routine after a fixed time of 400us.

That's exactly what my posted code does. The pin goes high at the time you desire, in loop, and it goes low 400 µs later. That's what you wanted: a 400 µs interval.

Not the answer you're looking for? Browse other questions tagged interrupt timers isr or ask your own question.