I'm trying to get consistent values from the LM335Z temperature sensor. But it behaves very strange.

I'm using an arduino nano and it's powered via USB from a Raspberry Pi. The circuit also has two little reed relays (SIP-1A05), a button and a potentiometer. It's connected like this: 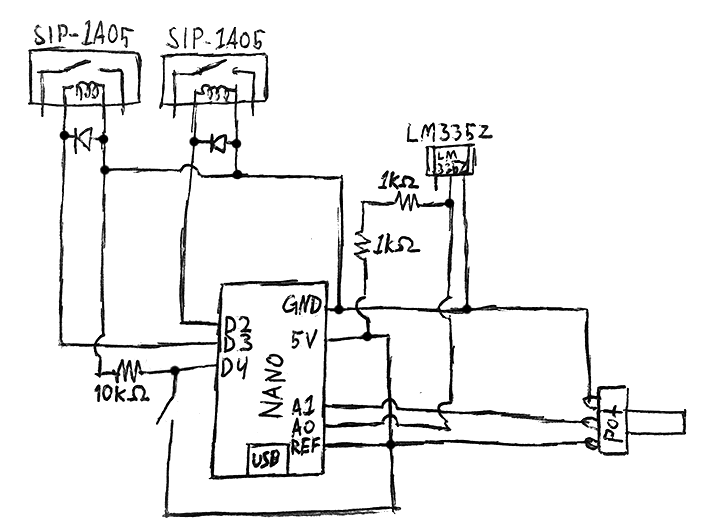 Additionally I'm using analogReference(EXTERNAL) in an attempt to get consistent values, so I've connected the Arduinos 5V output to the reference voltage pin. Here's the code for reading the thermometer:

Then it just waits for me to say "get" in the serial monitor and it replies with:

I also read somewhere that the first couple of readings are unreliable, and that you should read a couple of times in startup, which I do:

Yesterday the termometer reported 37 degrees. Today it started by reporting 49 degrees. After asking for the temperature a couple of times it said 56. Then now, about an hour later it says 52. And if one of they relays is active it says 77 degrees. My two other (non Arduino) thermometers have ben on a steady 25 all this time.

What should I do to get reliable values from the LM335z?

Added dots to the intersections of the circuit diagram for better readability.

I've also found a way to get the thermometer to work, kind of. I removed the external analog reference and only have one 1kOhm resistor for the LM335Z.
Then I have this code instead:

It worked perfectly standalone on an Arduino Uno powered via USB3.0. When I moved it over into my project with the Nano it gave a few degrees off, but that can be combated by just subtracting the difference I guess. Then I tried switching to a USB2.0-port on my keyboard, and the values started jumping all over the place.
Here's a comparison using Arduinos rather spartan plotter: 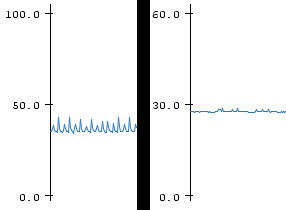 Also, the temperature dubbels when a relay is on.

How do I tackle this? I'd like keep powering it from my Raspberry pi 3, if possible.

According to your schematic, one of the LM335Z's leads is floating. The pins are meant to be Vcc, Gnd, and output; the output should go to an Analog input.

You wrote that Aref was tied to +5 but you've drawn it as going to one end of the pot with the other end of the pot grounded. The pot's wiper goes to A1 (assuming the pin hasn't been set to some other function).

In short, check your circuit. Try wiring up the sensor to +5, Gnd, and your DVM. Then replace the DVM with A0. At that point you'll have confirmed the sensor circuit, leaving only the code and the external analog circuitry. While I only skimmed the code I don't see anything that would give flaky results. I think you're seeing analog noise, probably due to one or more of the floating sensor pin, an inconsistent or noisy Aref, and pickup in the analog input from the sensor.

Update: I based my connections description on this diagram 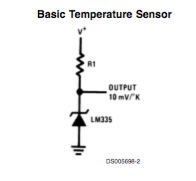 , from this datasheet. In all of those diagrams, the Resistor-Zener connection is shown as the output and no pins are shown floating. But I did see that pin labeled as adj, for what reason I don't know. That's really why I recommended getting the sensor working by itself first.

I see your +5V to Aref connection now. The usual convention for indicating a connection at such a crossing is to put a dot on the intersection, just as the output pin's connection is shown in the above diagram.

Not the answer you're looking for? Browse other questions tagged arduino-nano analogread temperature-sensor or ask your own question.

0
1 Wire temperature sensor
0
Temperature sensor reading is higher than the actual temperature
3
Using ATtiny85, NRF24L01+, DHT2: can't get data from DHT22
2
Sensor for very low temperature (liquid nitrogen)
0
DS18B20 - Thermometer and Sensor discrepancy (varying)
1
Temperature Sensor not giving proper values
2
Build a timer that starts and stops timing when 2 wires are broken
2
What is the lowest resistance pot that is useful with an analog input?