I'm thinking of creating a "small" electronic dice. (I will solder the button a little different though xD) 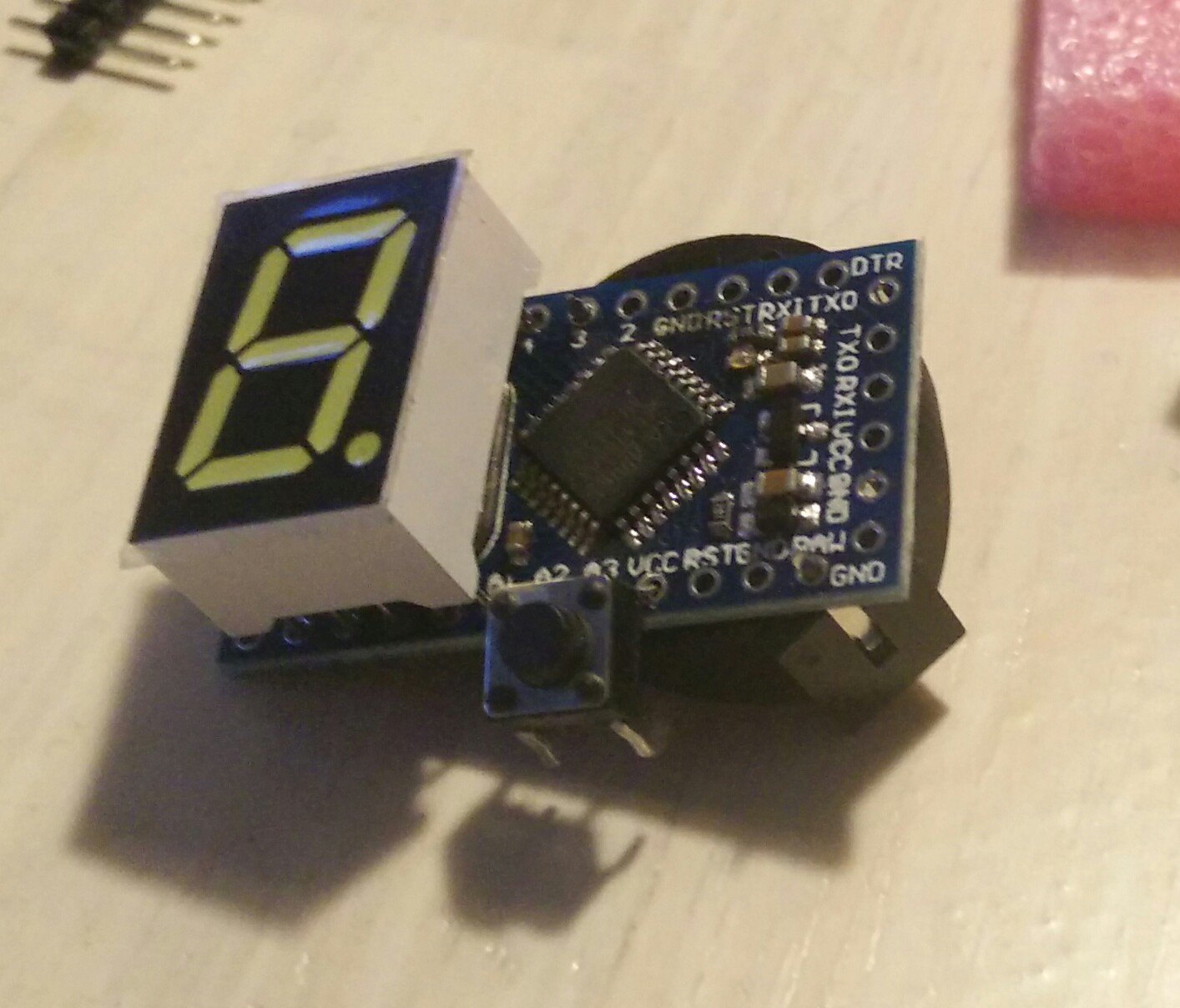 But there are some concerns on my design:

Powering from a coin-cell

(I probably won't use it though, it's placed inconveniently for this project, but I am wondering.)

A crude drawing below:

The fun thing is, polarity of the LED's/segments doesn't matter, since I can change which side is high or low? :) Also, I've only drawn half the LED's/segments. And I know it's better to use a resistor on every pin, but I don't want to make it any more bulky. 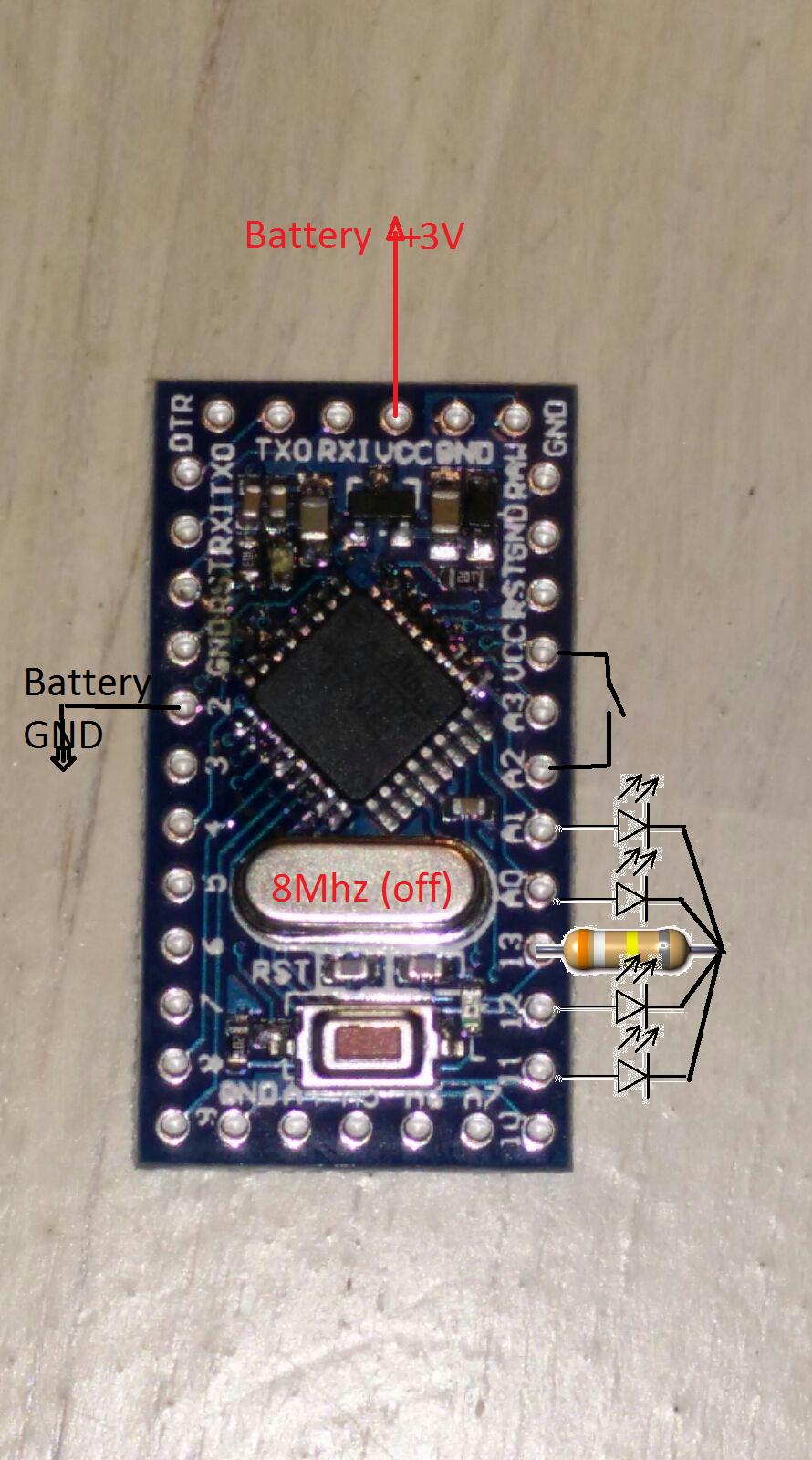 You can use an I/O pin as a supply for another (low power) device, but you should power the Arduino itself from its Vcc and GND pins.

I could use the reset button, but would it still give me "random enough" numbers?

You will likely see the very same sequence every time you reset it. There are ways around this:

I would recommend, however, that you use a normal I/O pin to trigger the dice, if only for one reason: the time when the user presses the button (that you read with micros()) is a very good entropy source for seeding the RNG.

For example, whenever the user presses the button you could:

As you seemingly already know, random() is a pseudo-random number generator intended to produce a sequence of numbers that look random. Unless you have some other source of randomness in your program, every time you restart the Arduino you will get the very same sequence of numbers. Getting true randomness (also called “entropy”) on an Arduino is not so easy. Here are some ideas you may want to explore.

Read from an unconnected analog input

This trick seems to be pretty popular. It can even be found in the Arduino documentation on randomSeed():

use randomSeed() to initialize the random number generator with a fairly random input, such as analogRead() on an unconnected pin.

In my experience, this seems to be a very poor entropy source. I wrote a test program that prints out the output of analogRead(0) and it seems to cycle through the same few values in an almost predictable way. I estimate this gives around one or two bits of entropy per call. On the plus side, each call takes just over 100 µs.

Read from an analog noise source

There is a lot of literature on building analog noise sources. Such sources are used inside crypto-grade random number generators, but the circuits are likely to be more complex than you would like. There seems, however, to be a very simple alternative. In a comment to this post, CharlieHanson wrote:

Connecting the analogue input to the collector of a run-of-the-mill transistor, with the emitter grounded and base open helps to make a noisy input.

I have not tested this idea, but it is certainly worth exploring.

If the user is required to press a button to throw the dice, the timing of the button press is probably the best entropy source you can have. With a 8 MHz clock, the micros() function has a resolution of 8 µs (64 clock cycles). Assuming the user is unable to control his timing better than 0.1 seconds, then you have more than 13 bits of entropy per button press.

If, instead of micros(), you use timer 1 running at the full CPU speed, then you would have 16 bits of entropy per button press. And you would not need random() at all, as you could just output 1+TCNT1%6. That would be like throwing a dart at a carnival wheel spinning at 80 million RPM (8 MHz / 6)!

The drift of a clock relative to another clock can be used as an entropy source. The ATmega chip in your Arduino has two independent clocks: the internal “calibrated” 8 MHz RC oscillator, and the 128 kHz oscillator used by the watchdog timer. Both are low-accuracy clocks subject to somewhat unpredictable drift, which is a good thing for this application. You can gather entropy from this by configuring the watchdog timer as a periodic interrupt source, and using timer 1 at full speed to time the interrupt arrival times:

I have tested this idea by plotting the time differences between successive interrupts. On an Arduino Uno clocked at 16 MHz, I see short-time fluctuations with an amplitude of about 300. That should provide around 8 bits of entropy per second.

Save the entropy pool across reboots

Once you have spent some effort to gather entropy from the environment, it would be a pity to lose it all at power down. It is common practice to save the entropy pool to disk when a computer shuts down, and restore it at boot time. This avoids the problem of the RNG always starting in the same predictable state. On the Arduino, you have no disk, but you can use the EEPROM instead. The problem is you cannot know in advance when the user is going to switch the device off. Then, ideally, you would save the entropy every time the user requests a new dice value. The new problem is that the EEPROM is only guaranteed to work reliably for 100,000 write/erase cycles. This may not be a serious problem (100,000 is plenty of throws), but it can nonetheless be mitigated by using a wear-leveling scheme, where you distribute the writes across the whole EEPROM instead of always overwriting the same bytes.

Wear-leveling can add significant complexity to your program, but it turns out there is, in this particular case, a wear-leveling scheme that is trivial to implement: just write at a random location! At startup, you do not know what was the last location written to, but you do not need to: you read and mix the whole contents of the EEPROM:

Combine the entropy sources with the XOR operator

As you probably already noticed, the bitwise xor operator (^) is used every time one wants to combine entropy sources. The main reason is that, if a and b are independent random variables, then a^b is at least as random as the most random of a and b. Which means that XORing a “good” random variable with a “bad” one is harmless. This is somewhat formalized as the piling-up lemma.

As an example, doing randomSeed(analogRead(0)) at program startup is fine, but doing it repeatedly during program execution is a terrible idea: most of the time this will put the RNG in one of a very few states. If instead you

then you are combining the current randomness of the RNG with the output of analogRead(), and putting this back into the RNG. And this is harmless even if analogRead() is quite predictable.

A side note on randomSeed(): Arduino releases prior to 1.6.5 had a bug that would truncate to 16 bits the entropy provided with randomSeed(). On those releases it is better to use the avr-libc srandom() function. The bug has since been fixed.

Definitely not. That is a sure-fire way to kill the Arduino.

You will only get random numbers if you seed the PRNG with a random number. If you can get a source of entropy (noise on an analog pin for instance) then yes, that could work.

And I know it's better to use a resistor on every pin, but I don't want to make it any more bulky.

It's not "better" - it's REQUIRED. With just one resistor and one segment on that segment will get 8x the current compared to having all 8 segments on. You then either get very dim segments with lots on, or smoke from segments when not many are on.

Yes you should be fine with the voltage from a coin cell - though don't expect it to last long!

No you can't use an I/O as ground - they are set to input by default, and even if they weren't, if wouldn't be guaranteed to work, and even if it did happen to work*, it would be horrible. I don't quite understand why you want to do it this way - why not just connect the cell's -ve to the GND pin, right next to the VCC?

If you seed your random number generator suitably (e.g. from an unconnected analogue input) you ought to be OK since that will suitably random - you'll be reseeding it each time with a different seed.

*Stranger things have happend! The very fist ARM chip worked without power, running from parasitic currents from the inputs, as they discovered by mistake when they tested it with the power supply disconnected.

It would not be a good idea to use a input pin as they can only sink a maximum of 40mA per pin.

Also, incase any power surges are experienced and it is connected to Vcc if that 5v is exceeded then it could damage your board. It might be a better solution to use the RAW pin even if it does ultimately use more power.

Not the answer you're looking for? Browse other questions tagged arduino-pro-mini battery or ask your own question.