How to power an Arduino using automated mains/rechargeable battery switching?

I'd like to not go the expensive shield route and instead purchase some inexpensive breakout boards from Aliexpress or eBay if possible. I'm willing to put in the time to learn if someone will point the way.

Can someone please provide some guidance?

Yes, charging a battery and supplying an Arduino at the same time is possible as long as we manage the caveats (see below) of in-circuit charging.

This is what I use:

This is how it works:

I took some quick snapshots, please excuse the image quality. Charger is in the center, Arduino to the upper left, battery in a holder to the lower left, solar panel to the upper right.

The Arduino has a voltage regulator, but I don't use it in this setup. An explanation why and when to use the regulator is beyond the scope of this question and a matter for another answer. 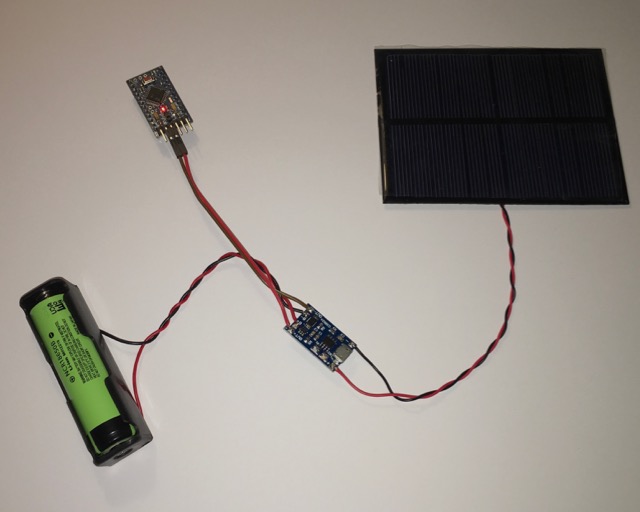 In the first photo the charger input is only connected to the solar panel, but the panel voltage is low. So the charger is actually off and the Arduino is running off the battery. 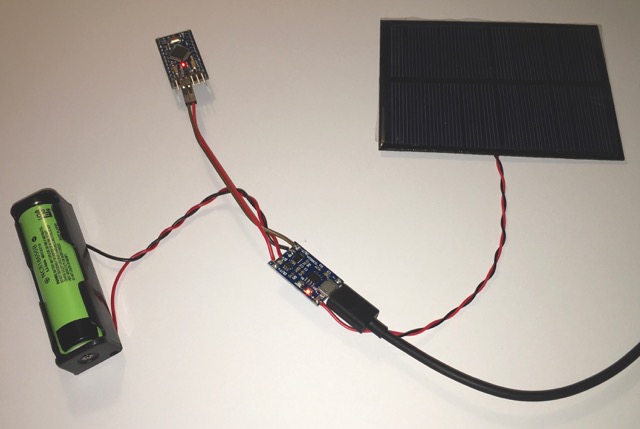 In the second photo the charger is now connected to a USB power supply. The charger is on and in CC/CV charge mode (as indicated by the red LED of this charger model). 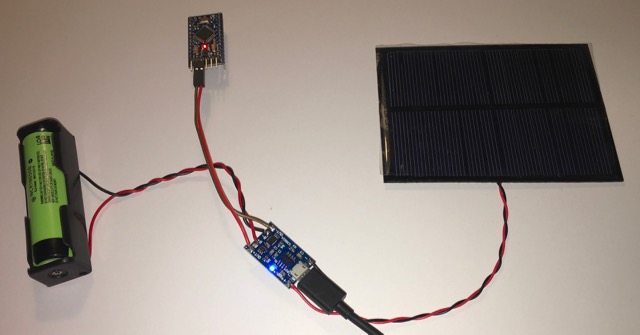 In the third photo the charge cycle is completed, the battery is full (as indicated by the blue LED of this charger model). Note that the charger could determine the charge completion even though the Arduino is connected and running (no power saving tricks involved here). 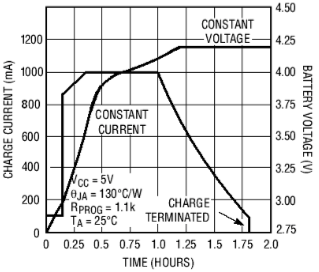 Other chargers may have other thresholds, but that doesn't matter as long as it fits your battery type and uses constant current/voltage only. I have no particular recommendation for a charger, but so far have a good impression of the one I used in this answer.

There are a couple of cases to consider, though:

Should the battery voltage ever go below around 2.9V (e.g. deeply discharged battery), the charger will switch into trickle charge mode where only very small amounts of current are passed to the battery – too little current (i.e. too low a voltage) for the Arduino to run. Arduino will go into brown-out and try to restart until the battery has recovered. So this can become a state in which your Arduino won't respond for an unknown amount of time.

If the load connected to the battery draws a current that isn't small anymore – compared to the battery charge current – then the charger cannot recognise a full battery anymore, since the current as seen by the charger will never fall off at the end of any charge cycle. So watch out how many gadgets you connect to this kind of in-circuit charger.

There are a multitude of ways to charge a battery. Things like trickle charge, pulse charge, timer based charging, and so on. None of these would likely work, as the voltage those charger types generate could upset the Arduino and the load the Arduino presents could upset the charger.

Please also note that some chargers don't supervise the battery. With Li-Ion or Li-Poly (and other) batteries this would be a very bad idea. Always choose a charger appropriate for your battery.

The charger I use employs a linear regulator. That's not very efficient, other topologies are possible. But they might require supply filtering for the Arduino.

I wrote a library for the purpose of supervising an Arduino's supply voltage (and chip temperature). This technique allows to check the battery level without any additional components. That library is called CoreSensors.

There are many ways you can do this, as you mention there are ready made shields that do this.

You need to take a few thing into consideration:

You could in theory use 1 lipo cell directly to power your MCU, as the voltage spans from 3,6 to 4,7 Volts pr.cell and charge the lipo when NOT in use (you cannot charge a lipo directly while in use, thats why you need a controller). This would be the cheapest way.

Can someone please provide some guidance?

power your arduino from a power bank and then power the power bank via ac adapter.

simplest and likely most inexpensive solution.

Not the answer you're looking for? Browse other questions tagged power battery or ask your own question.

1
How to choose between Lithium-ion vs NiMH batteries to power Arduino on the go.
1
Implementing Quasi-Perpetual Battery on Arduino
0
Battery Solution for ESP8266 and HC-SR04
1
Power Arduino from 230v with battery fallback
1
Solar Power Inside a Car
0
How to power Arduino and shields with 4 rechargeable AA batteries?
2
Arduino Nano 33 battery power/charging
3
How to power board plus module with one battery pack