Expanding analog inputs to the Arduino

I need the Arduino to read about 100 analog inputs. Is this even doable? If not what is the maximum analog inputs I can read into the Arduino (The maximum non trivially would be to use the analog pins that the board already provides).

But can I expand those out? Thanks!!

There are two methods of doing what you want:

SPI or I2C ADC chips are readily available in a range of resolutions, sampling speeds and number of channels. They are fairly simple to add to any Arduino.

Adding lots of chips to the SPI bus though can itself be troublesome with the increased capacitance of all those inputs meaning you have to reduce your communication speed somewhat or add extra buffering to drive the bus with more current.

I2C chips can be harder to have lots of them since there are only a limited number of addresses on an I2C bus - plus on many Arduinos the I2C is also two of the analog pins, which you may not want to sacrifice.

The second option involves using analog multiplexers (eg the 4051) to switch different sources in to the existing analog inputs.

A third option which you probably haven't considered is to have multiple arduinos (or other low-cost microcontrollers) each doing some of the sampling and then implementing some kind of communication method between them (or to a single master). This has the added advantage that it's then possible to sample multiple channels at once (one per microcontroller) speeding up your operation somewhat.

Expanding on part of Majenko's answer, you can use an analog multiplexer like the 74HC4051 to turn one analog port into 8. 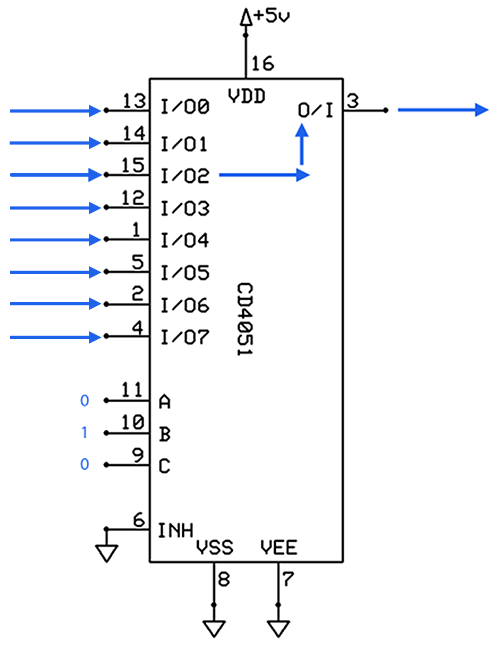 This would let you handle 96 inputs with only 6 extra chips, and pretty simple code. I have code examples on my page about 74HC4051 multiplexer / demultiplexer.

For 8 inputs the code is:

I have been exactly working with the same Issue. I need a program that reads 100 Thermistors...Why? well, some times you need it.

I kinda finished that already.

I tried the 74HC4051 multiplexer / demultiplexer. But, for some reason I didn't get the desired result.

First thing you will find...POWER, you will need an external power supply, in my case I just made a voltage divider and connected the thermistor to that power, then just use the Analog port for reading...

I use I2C protocol, 8 arduino Mega 7 slaves and One master. and since send send Integer, float, and blah, blah was kinda not helping I just made it for It can send the Analog reading over I2C and the master makes all the desired conversion.

If you still are interested, I can send you the source code for master and slaves. With this template you can connect up to 50 arduinos and the master will look for every arduino connected in the network and ask for data.

Not the answer you're looking for? Browse other questions tagged adc or ask your own question.

2
Arduino Uno ADC behavior in free running mode
0
ADC timer interrupt when ready
1
Using an esp8266, how can I create a circuit to measure 2 different analog inputs (not simultaneously) with only one ADC pin available (A0)
0
Transfer 10-bit via Arduino-to-Arduino SPI protocol
2
what is arduino adc reference?
2
Ardunio Mega/ATmega2560: Using Port F or K for both analog inputs and digital outputs
0
Using Arduino to Record analog signals with SPI ADC + Sampling Rate Issue
0
Maximum frequency that can be converted with Arduino Uno?