I've designed an PCB and due tot the delivery times, I kinda want to order it right now. I don't yet have the components, so I haven't actually tried it on a breadboard.

Now I'm unsure if the PCB would work, as this also is my first try in PCB design.

It's a single-sided PCB. All parts (should be) through hole. I would be using SoftwareSerial since the ATTiny does not have serial (Rx/Tx).

[TL:DR] Would this PCB work?

Some points of which I'm unsure, or might be a problem: 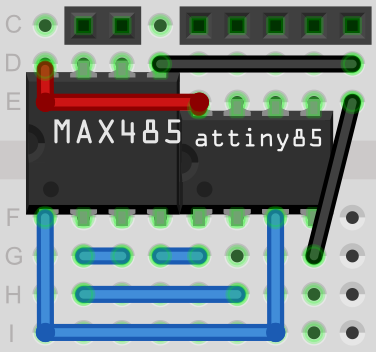 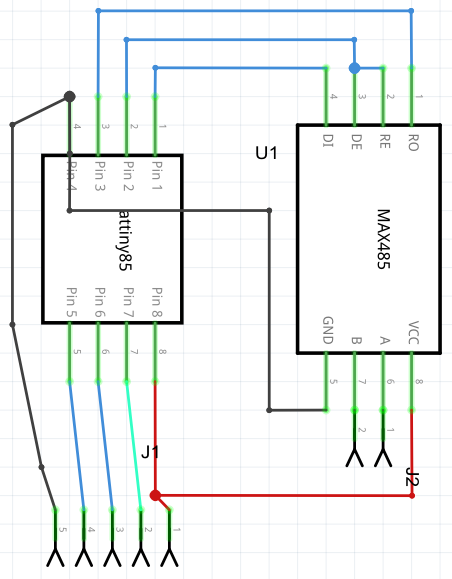 If someone needs the file: It's opensource, no restrictions. Would be nice to give me some credits/donation, but you can freely use it for even commercial projects. Download below:

Some credits to Nick Gammon, I've used his schematics as a reference (especially on the TX enable pin, which was quite smart, using only 1 pin). 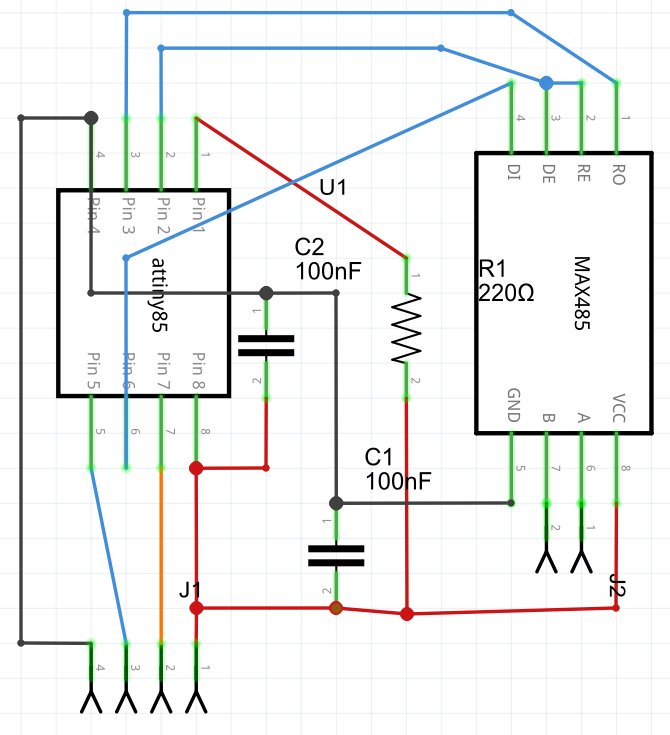 EDIT: It's better not to use a pull-up resistor on the reset line. The ATtiny85 has this internally.

Would this PCB work?

Possibly, sometimes, under some conditions. See below.

For your circuit there is no real electrical reason to use a ground plane. However, many fab houses like you to use at least a copper fill in the empty areas since it means less copper has to be etched off the board, and so their etchant lasts longer before it needs to be replaced.

Not in the slightest.

Can I actually use the RESET pin as other functions (without changing fuse bits)?

You can only disable the RESET functionality of the RESET pin using the fuse bits - and then it becomes somewhat difficult to program: you need a HVSP (High Voltage Serial Programmer) to get it back into programming mode again. This blog post details how it is done.

Doesn't it need any resistors? I've seen some on the RS485 breakout boards.

Your circuit isn't complete. There are a couple of things missing that you need to add, and some that you might want to add.

The things that are missing:

The latter are optional depending on where in the bus your module is. You need termination resistors at both ends, so it is common to have them on the boards but with jumpers to enable/disable them.

Looks ok. You might be able to squeeze it a few mm smaller each way, although since the board already is small, that probably would make little difference in cost.

Copper/ground fill on a single-sided board won't make much difference for this circuit. It would be reasonable, however, to make the ground traces two or three times as wide as they are.

If you mean, make square corners rather than the 45° turns as shown, either way will make little difference for this circuit. The 45° turns are ok.

Note, sharp V-notches, like the one inside the traces at pin 2 of the Tiny85, are undesirable; I think they etch less accurately than more-open junctions do.

Looks like there's room to spare and the board could be made slightly smaller.

For homemade boards that are drilled using a hand-cranked XY table, keeping drilled holes on the intersections of a .1"x.1" grid is a good idea. For commercially-made boards, it's less important but can help with assembly.

Regarding how long it takes to get your PCB back from a manufacturer: The PCBshopper.com website makes it easy to compare time vs cost across a range of manufacturers. For small circuits like yours, OSHpark is an inexpensive choice (you would get three double-sided boards for under $5, in about 15 days). If you need up to about 10 medium-size boards, Maker Studio is quite economical but standard delivery may be slow (2-3 weeks). If you are in a hurry and need a larger number of boards, consider (eg) PCBway. By paying $25 for DHL shipping, you can have a batch of boards in 9 or 10 days – about three days for manufacture and a week for delivery. The pictures below show an example of PCBway's order tracking, the left side at about two days after the order was placed, the right side 11 hours later. This order for 50 each 36 mm x 56 mm two-layer boards with silk both sides cost $27 for manufacture and $25 for delivery.

Not the answer you're looking for? Browse other questions tagged pcb-design or ask your own question.