How to connect a 12V power supply to an RGB LED strip receiving RGB values via Arduino Uno PWM pins?

I want to send RGB values from my Arduino Uno PWM pins to an RGB LED strip.

I'm trying to follow this adafruit tutorial but am finding the diagram references unclear.

I've mocked up a diagram but am not sure it would work: 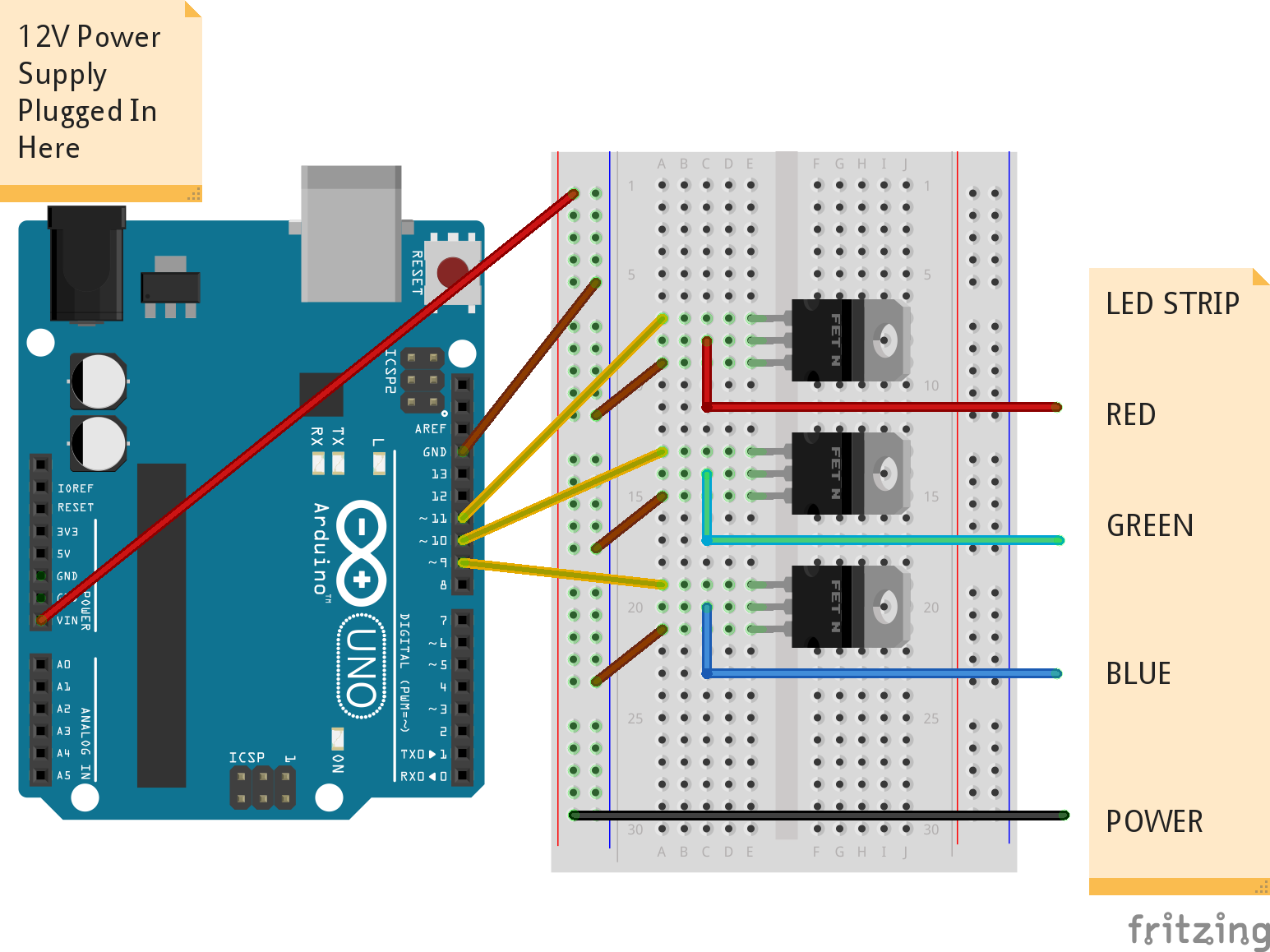 ( I haven't used the Vin pin before, so, just to be clear, that is the pin that is connected to the positive line on the breadboard - is that how to transfer the 12V power to the breadboard? )

01) Is the above diagram safe and sound?

02) How do I connect the power supply to the RGB LED strip?

03) Is it ok to keep the Arduino 'powered' by the USB whilst plugged in to the 12V power (so that it can keep sending the RGB values to the LED strip via the PWM pins)?

04) I've seen references to grounding the power source, how do I do that?

05) Are the MOSFETS I have from the Arduino Uno starter kit sufficient for this task?

01) Is the above diagram safe and sound?

It looks to be OK, except one thing:

The current you can draw from the Arduino's VIN pin is limited to about 1A. That is a sixth of what your power supply can provide, and the LED strip when everything is on needs more than that (1.2A), so you could run into problems. The limit is threefold:

And of course the Arduino itself needs to use some of that available 1A. So you might be better off splicing your LED circuit into the power supply's wire before it enters the Arduino.

02) How do I connect the power supply to the RGB LED strip?

Power goes in (+) to the common pin of the LED strip and then out of any of the three colour pins that happen to be connected to the ground of the power supply. That is, the ground of the Arduino in your schematic since they are (as they should be) all shared.

03) Is it ok to keep the Arduino 'powered' by the USB whilst plugged in to the 12V power (so that it can keep sending the RGB values to the LED strip via the PWM pins)?

Yes. There is circuitry on the Arduino that allows both the USB and barrel jack to be plugged in together.

04) I've seen references to grounding the power source, how do I do that?

That refers to connecting the external power supply's ground and the Arduino's ground together. By using the barrel jack that is all taken care of for you.

05) Are the MOSFETS I have from the Arduino Uno starter kit sufficient for this task?

Not really. They are designed to be switched with a higher voltage than the Arduino's IO pins provide. While they will work, they may cause the LEDs to be dimmer than they should be, or the MOSFETs might get hot. Basically a MOSFET has a "threshold" voltage range which is the voltage range at which the MOSFET transitions from off to on. That is 2V - 4V for that MOSFET, which while within the range of an IO pin isn't really that great. At 4V the MOSFET still isn't completely on. You may notice from the datasheet that the "R_DS(ON)" value - that is the resistance of the MOSFET when it is on, is measured with the gate voltage at 10V. That is a voltage where the MOSFET is guaranteed to be fully on. Anything less than that and the resistance will be higher causing more losses across the MOSFET. I could see that instantly from the model number - it starts with "IRF". There is a specific range from International Rectifier which is designed to be directly driven by an IO pin - these are the "IRL" (for International Rectifier Logic-level) series. These have their R_DS(ON) values measured typically at a gate voltage of 4.5V and a threshold voltage in the region of 500mV to 1.5V. When directly driving from an Arduino these IRL (or equivalent from other manufacturers) are preferred.

Not the answer you're looking for? Browse other questions tagged arduino-uno rgb-led or ask your own question.