I'm not expert in electrical circuits, maybe I am making a very simple mistake or missing some basic points with my circuit.

What I'm trying to achieve is simple, to run 2 DC motors with an ultrasonic sensor to detect obstacles and change direction. When I unplug the ultrasonic sensor everything is working fine as expected without obstacle detection but when I connect the ultrasonic sensor, sensor always responds with 0 cm distance. Then I removed 9 V battery from the circuit and plug Arduino to computer via USB, sensor works fine but motors are not working properly, it looks like the power from USB is not enough to drive motors at the same time. I've added my circuit scheme below: 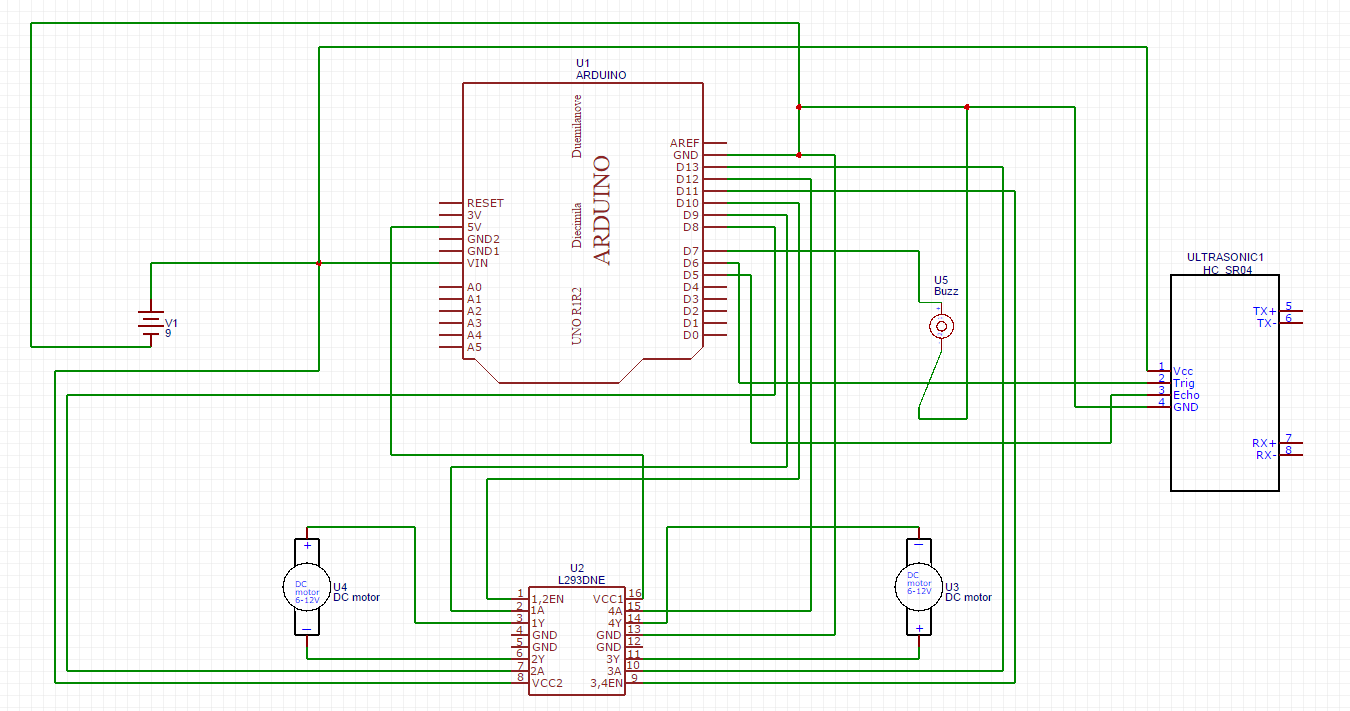 How (acoustically) loud are the motors? If they're the typical RC car motors, they can screech harmonics right up into the 40 KHz range typical of ultrasound ranging sensors, interfering with the sensor's ability to work at all.

How (electrically) loud are the motors? If RC as above, they throw all sorts of transients onto the power lines (and everything else within electrical pickup range). You might want to put some ceramic capacitors across the motor leads to absorb some of those transients.

Some years ago I used two Novak Super-Rooster motor drivers for a battle-bot competition. They were driven by PWM outputs of an Arduino, where 50% duty cycle was off, 0% was full speed reverse, and 100% was full speed ahead. These were powered by a sealed lead acid battery, and driven full-out, the motors got +/- 12VDC at about 40 amps. There was a common ground with the Arduino, going to the Super Roosters, but not the motors, and the drivers took care of the electrical shielding, with a little help from the ceramic bypass capacitors I mentioned. Worked great!

0
How to drive motors and use an ultrasonic sensor simultaneously?
3
Controlling Servo Motors with push button. Problem though
0
DC motor not start?
1
Running multiple motors simultaneously
0
Ultrasonic sensors with 12v motors will not work! (ADRUINO)
0
How do I measure speed and manipulate the speed based on distance covered?
0
Arduino acts odd when disconnected from computer
0
Powering an Arduino directly from a motor driver (DRV8825) or external power source?
2
DC motors only run in one direction