Regarding using I2C with Arduino for Silicon Micro-structure 5852 D 1.5 psi

I am trying to get output from a sensor (micro-structure 5852D), but I only get two outputs: 11 and 255 for even applying pressure.

The following is my code, please show me how to over come this problem.

The issues in your code:

In order to read data from the sensor you must first select the register you want to read. To select a register you must first send the device address (95 in decimal, 5F in hexadecimal) with the write request bit set, and then the register address of the byte you want to read.
You can then read the contents of the selected register by first sending the device address, this time with the write request bit clear, and then receiving one byte of data immediately followed by a not acknowledge (NACK) to end the transmission.

The internal registers are organized as in the following table: 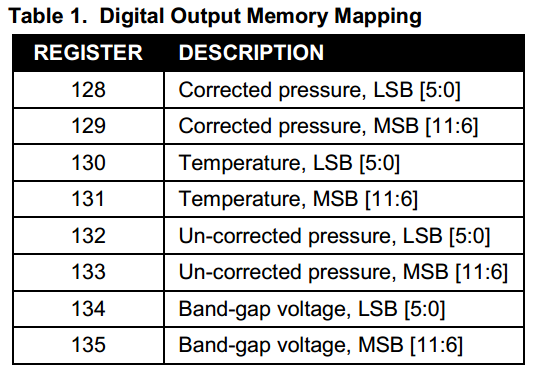 Here is my take on the code. It compiles fine, but obviously I cannot test if it actually works as I don't have the sensor. I removed the scaling routine, as it would be wise to first get it working to some level before implementing less essential features.

For some unfathomable reason Silicon Microstructures decided to not include the I2C interface specification in the datasheet itself. The information is instead found in a separate application note.

And no, the implementation isn't in the base class either: virtual void flush() = 0;. To work around this, I replaced the flush call with a read() loop.

Not the answer you're looking for? Browse other questions tagged i2c or ask your own question.