"tamper" circuit of a reed switch: can I connect the two wires to an INPUT and an OUTPUT pin?

While working for the automation side of my new house, I'm currently in the process of installing several reed switches on top of external doors and windows.

Even if this could be used as a "security" infrastructure, I'm more interested, at the moment, at the "automation" side (checking the status of door and windows without the need to physically watch them) and as such, I'm going to extend the arduino-based infrastructure I've already planned and prototyped [more details here].

This is the reed-switch I've installed (1€ coin added for size reference): 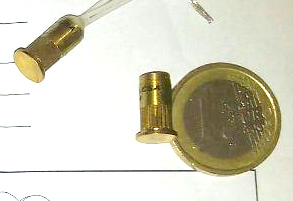 and this is the related circuits:

As you can see, it comes with two circuits: one related to the "switch" funcionality; another one as a safety-measure to catch some "cuts" along the wires.

Even tough everything is working fine, I wonder if there are better approaches, expecially inchecking the status of door and windows without the need to physically watch them terms of POWER-CONSUMPTION. So, here are my questions:

Is it feasible? If yes, how? Also: is it worth the effort?

Every comment, sidenotes, hints, critics, whatever... is REALLY welcomed/appreciated.

BTW: the full-code, where the REED switch is handled togheter with pushbuttons and relays, it's available on GitHub

So I would like to have the current flowing ONLY during the "checking-timeframe".

Turn off the pull-up until just before checking. Allow a few milliseconds for the pull-up to raise the voltage.

With such a timing, does the polling-approach make sense?

Certainly, if you are trying to save battery power.

Bear in mind the voltage drops over long cable runs (and also possibly induced spikes). You might want a more powerful pull-up (eg. 10k) rather than the inbuilt 50k. You can still organize that by having an output pin turn on the voltage to the pull-up. Or, have the pull-up wired in permanently but instead of running the other side to ground, set the "ground" wire to OUTPUT and write LOW to it - and then set it to INPUT when you want it to be inactive.

See my post about Power saving - you could use a watchdog timer to wake the device at (say) every 4 seconds, to check things.

You may want to add in input-circuit protection (eg. a couple of diodes) to dampen down any incoming spikes. Even something simple like this:

Not the answer you're looking for? Browse other questions tagged arduino-mega sensors power current system-design or ask your own question.

0
What minimal resistance should be between an input and output pin not to burn Arduino?
0
Can I use the same Data Registry for both input and output pins?
3
Low Power Pin Change Detection (ATtiny)
1
In a circuit with a switch and a pull-down resistor, why does the high impedance of the input not discourage current from flowing into pin?
0
Battery life calculation using Nano, NRF24L01+ and window magnetic reed switch
1
DHT22 Hanging Up Entire Program
2
Mega 2560 pin output power and control question
1
LEDs not lighting up even though current is flowing through them, problem with ground?