As Arduino Uno has a 16 MHz oscillator but while running program it has less frequency because some of the processing power is used for running the program. I have used the delay(1) but it is giving me around 500 Hz.

Example sketch which outputs 8 MHz on pin 9 on a Uno:

See my page about timers for more details.

Also, don't forget that there are alternative methods of toggling outputs.

You can use PORTS to do the job.

Here's a good example. And another here.

And this code is the idea behind it:

P.S. Don't forget that the port numbering is in reference to the chip pins and not the Arduino pins/legs.

Nick Gammon's code worked fine for me. Here is an oscilloscope picture of the waveform I've got from his code: 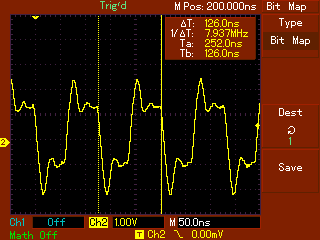 His code above (from Nick Gammon, on Jan 25 '16 at 20:33) worked excellent for me. I used his code on Arduino UNO and got about 7.9 MHz of output frequency on an approximately 1 V amplitude (peak-to-peak, with spikes making it go to about 2 V peak-to-peak amplitude).

The image above was obtained with my 40 MHz Oscilloscope from ICEL Manaus (manufacturer) at pin 9 (I used the Arduino UNO), with a LED and a resistor as a load at pin 9:

The oscilloscope probe (Channel 2, with fall slope trigger detect) is on the 4.7 Ohms resistor. It follows the connection order out of the pin 9 from Arduino UNO: PIN 9 > green LED > 4.7 Ohms resistor > GROUND.

The green LED keeps blinking at a normal luminescence, as compared when used at other output frequencies.

I used a external 5 V DC power supply, along with the USB connection on my PC.

If you have any questions just put them here. Thanks and thanks Nick Gammon

Not the answer you're looking for? Browse other questions tagged arduino-uno frequency or ask your own question.