I have 64 hall effect sensors (magnetic field sensors) (DRV5023AJQLPG) connected to an Arduino MEGA 2560. For that, I use 48 digital pins and 16 analog pins as digital input pins. The program in the Arduino continuously reads out those 64 digital input pins (in a for-loop) and sends out a serial byte, to a laptop via a usb cable, whenever one of those input pins changes between LOW and HIGH. I also use the ATmega2560’s internal pullup resistors to prevent irregular readouts of the input pins when the sensor is not giving a 0v output (i.e. when it isn’t measuring a strong enough magnetic field).

Everything is working fine when I only physically connect up to 16 of the sensors. The laptop then only receives bytes that correctly tell when a sensor measures a state-change.

However, when I start connecting more of those 64 sensors, then the laptop starts receiving irregular streams of bytes, erroneously suggesting that all the connected sensors measure changing magnetic fields (HIGH and LOW readouts).

I can think of two reasons why these irregular readouts occur: 1. Either, the ATmeag2560’s internal pullup resistors arent working as I think they should. 2. Or, the arduino board and >16 hall effect sensors combined are pulling to much current.

Calculating the combined current usage (using datasheet info), I came to this:

So, both the calculated and measured current usage seem within the range of what can be handled by mentioned power sources.

I’m kinda stuck now. Can anyone suggest anything that might cause this problem? Or point to incorrect thinking of me? Thanks for any responses.

'Schematic' (only showing first 8 sensors connected. The ArduinoMEGA is connected to a computer via a usb cable with disabled power line):

Top-side: the hall effect sensors and Vcc an GND rails: 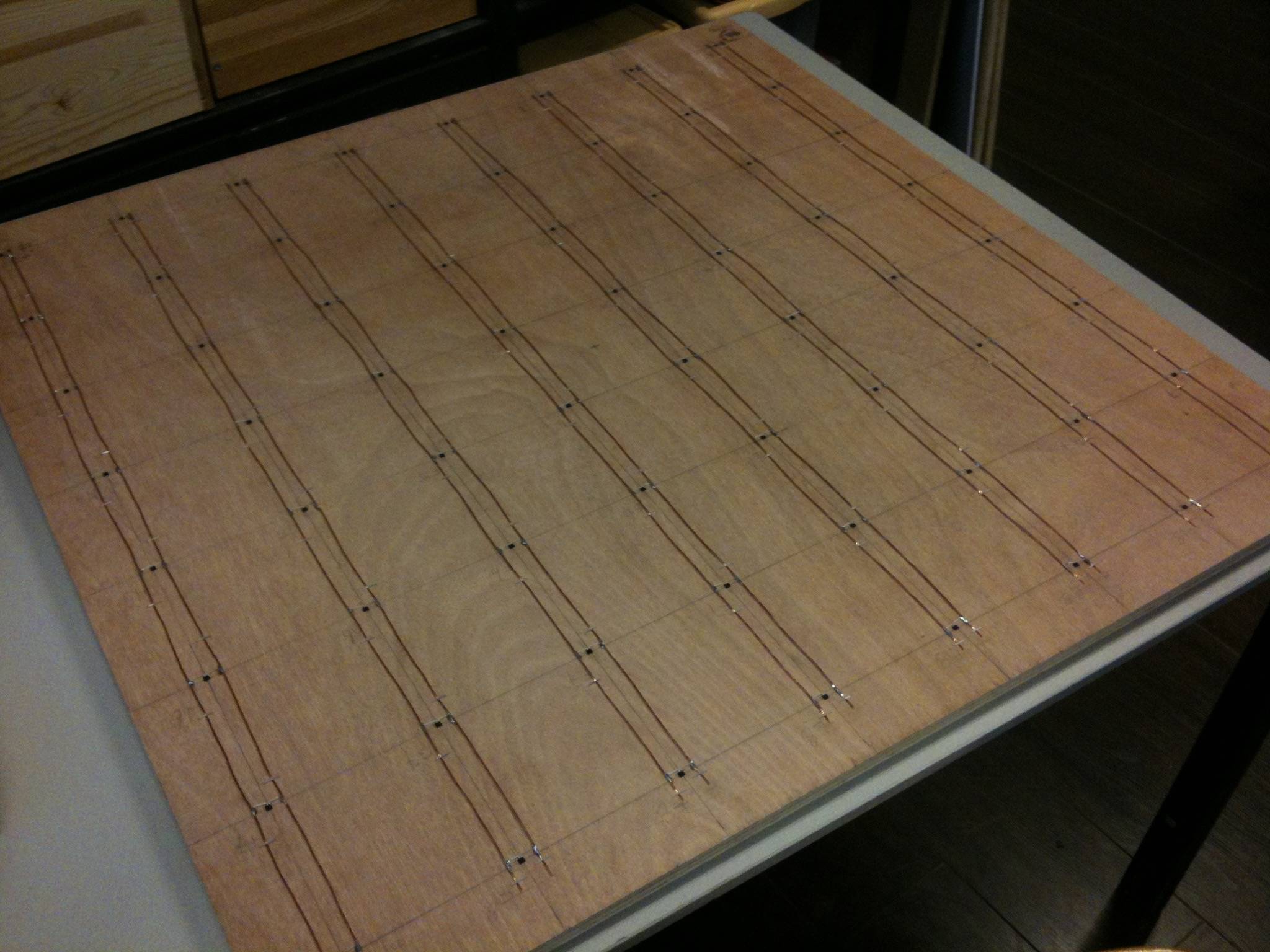 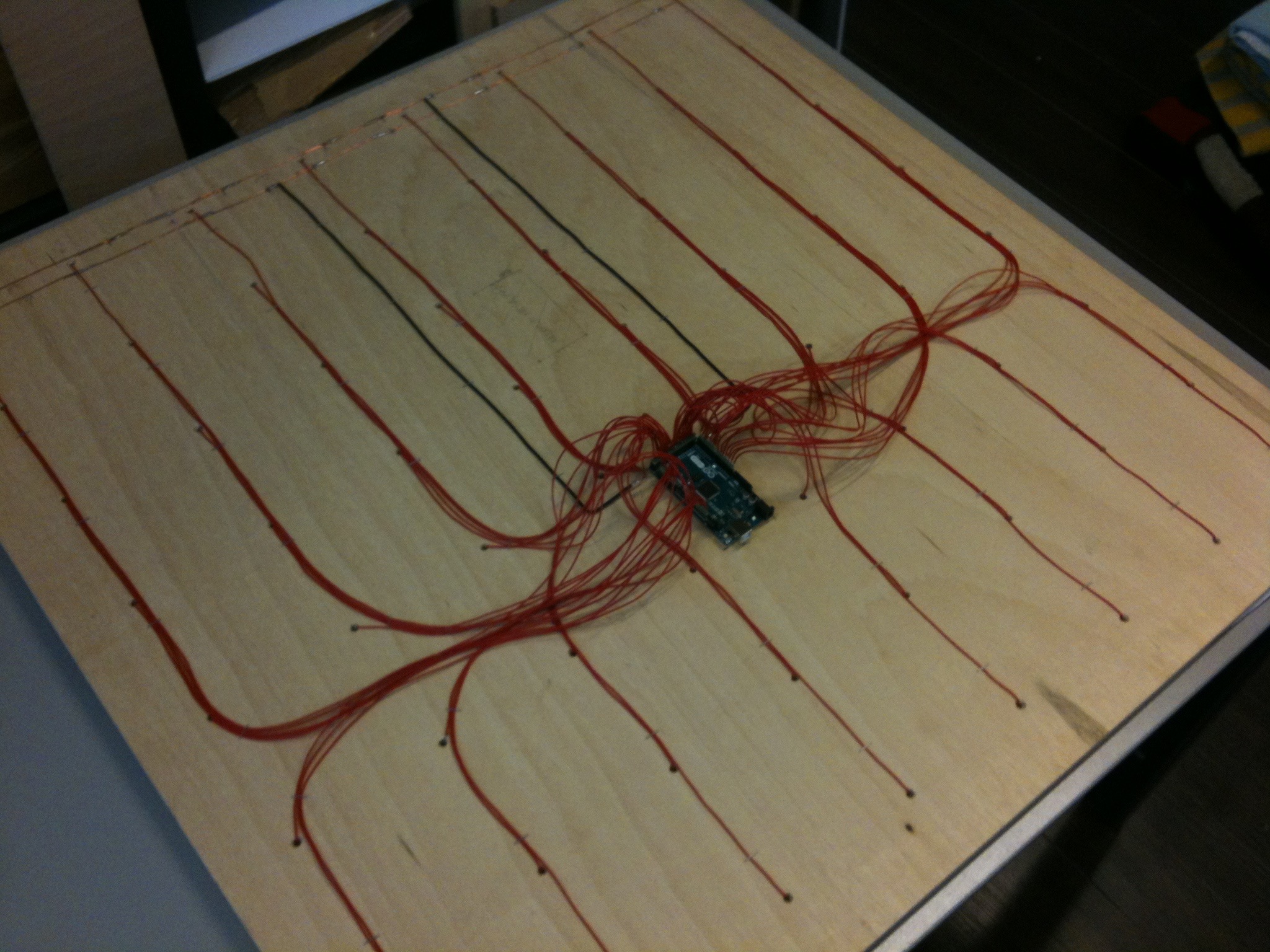 Below is the Arduino code:

After seeing your schematic, I think the general problem here is that you need to more closely read and follow the datasheet for this part. A lot of times, when you are hobbling a project together at a small scale there are a lot of things you can ignore and get away with, but as you scale up, all the rounded corners start to add up. In this case, you can get away with 16, but once you start adding too more, it becomes too much. Let's go over a few:

Like I mentioned in the comments, relying on the internal pull ups is probably not a good idea. In my personal experience, they are only really good for adding a quick button input for debugging purposes. I'm not sure specifically what would cause issues only after 16 sensors. It could be that collectively internal pullups are subject to a different and lower current limit, but I'm not familiar enough with the internal architecture of the ATMega2560 to do more than just speculate.

Per the datasheet, page 17:

A 0.01-µF (minimum) ceramic capacitor rated for VCC must be placed as close to the DRV5023 device as possible.

This capacitor is referred to as C1 in the datasheet figures and is required. This type of capacitor is called a decoupling capacitor, and one of the things it does is provide a local energy storage, so that when the sensor starts pulling a little extra current, it doesn't have to wait for the regulator to respond, it has some local energy already.

Your schematic indicates a single 1uF capacitor on the output of the voltage regulator, however, there are no capacitors for the sensors. The one capacitor is only for output filtering for the regulator, and will not satisfy any decoupling needs of the sensor.

Referred to as C2 in the datasheet, this an optional capacitor to filter out high frequency noise. This isn't needed in most cases, in fact, per the datasheet, page 13:

Most applications do no require this C2 filtering capacitor.

However, your project might not fall into "most applications" and there are a few things specifically that worry me.

I would definitely try the first two ideas above to begin with, and only pursue this as a last resort. The only way to know for sure if this is something you need is to stick an oscilloscope on the line and see how noisy it is, but that is not something you probably have handy.

I'm just a little bit worried about voltage drop. Depending on the gauge of wire used, with all the sensors connected, at the end of a strand you might have a non-negligible voltage drop.

With that many wires running together into the Mega, there might be cross talk problems.

Another common problem with scaling up is that there is a higher probability of having faulty components. This is especially with this part which per the datasheet indicates that is particularly sensitive to ESD. It could be that there is a dead sensor that has failed in such a way that it is causing problems for the other sensors. Maybe go through and test all 64 sensors, 8~16 at a time to make sure that separately they all work, and that the issue only occurs when all of them are connected.

Many other comments on the question have suggested a multiplexer and/or multiplexing and I will just briefly echo that here. Multiplexers are typically used in situations where you don't have enough pins and you want to split a single pin to multiple other pins. While that isn't an issue here with the Mega (it appears you have enough pins to do what you are wanting to do), there are other benefits that can be derived from multiplexing this.

For example, one thing you could do is split up the board into 8 - 2 x 4 chunks and then have a multiplexer (such as a 4051 or a 74151) local to each chunk. Then you would have just 8 short wires going into the multiplexer, as opposed to having long antenna-like wires heading to the Mega. This could improve overall signal integrity.

Not the answer you're looking for? Browse other questions tagged arduino-mega sensors current digital-in pull-up or ask your own question.

1
How can I increase resolution for current sensor?
0
Use TSL2561 and DS1307 RTC together
4
Which device to use to measure AC current using Arduino?
0
Digital Input with long cable - flickering values
1
In a circuit with a switch and a pull-down resistor, why does the high impedance of the input not discourage current from flowing into pin?
0
simultaneously read 16 hall sensor and maximum current allowed by Arduino
0
How can I scan for a HIGH signal on digitalRead during the main loop, while running other things?
2
digitalRead() function of Arduino doesn't read Input value sent by sensor after detecting the object
5
Why use a module rather than sensor directly?