How to dim background LEDs on TFT display with ILI9341

I have bought a 2.5" TFT shield online, which is equipped with the ILI9341 controller. I need to dim the intensity of the background LEDs to match ambient light.

This particular shield does not provide a pin to control the intensity of the LEDs with PWM via a separate input, so I need to dim the background LEDs of this display via software.

The zip file with the libraries can be downloaded here.

Does one of you know how can issue a command to the TFT display to dim the background LEDs?

I wrote a new function to set the display's brightness by controlling the background LEDs, but something is missing as I can seem to be writing correctly to the display. So I'm trying to get the display to answer to a known command first, like 0x28 (Display Off).

The new function is defined in Adafruit_TFTLCD.cpp:

The function prototype is defined in Adafruit_TFTLCD.h

Then I call the function in my main loop. To make sure, I first write some rectangles on screen, wait 5 seconds, then fill the screen with blue, call the new function and enter an endless loop so no other commands can interfere:

I got so far as to have the ILI9341 react to some commands, but not all the time, and not to all commands. I suspect there is something in the way you issue the commands that I'm missing( timing?, sequence?, other?)

Here is what I have found out so far:

I can get the display to react to the Display Off command (0x28), but only when I issue it in the begin(..) function. So, the original code in Adafruit_TFTLCD.cpp is like this:

If I change it to the following the display reacts by remaining white:

So, I have a reaction to command 28h.

Then I tried function 0x51 like this in the begin(...) function:

I even added command 0xBE (background PWM frequency) to see if it had any effect, but nothing :-(

elsewhere in Adafruit_TFTLCD (e.g. in FillScreen, Fill Rect etc, it doesn't work either).

Any ideas? They would be highly appreciated!

I got in contact with the manufacturer of the shield, they informed that the background LEDs are hardwired and not controllable via the ILI9341. So, it is not possible to dim the background light in this shield

I will look for another TFT shield and make sure it's dimmable before buying.

It looks like it should be controllable with command 0x51.

I would modify the library and add a new method to the Adafruit_ILI9341_8bit_AS class - something like:

Then you can change the brightness by calling that method on your TFT object in your sketch. (Don't forget to add the prototype to the class definition in the header file of course).

After looking at the schematic (mine is different) but on pin 16 is labeled as BL. If that is indeed the power for the LED backlights then a voltage applied to it should vary the brightness. Caution:You need to know how much current the LEDs are pulling. If over the limit for a PWM pin you will have to run it through a transistor to boost the current.

Most of thees cheap Chinese LCD modules have the LED backlight hardwired to Vcc and GND and cannot be controlled.

However, after inspecting the module I have and some similar ones online I found that most have the Back-light LEDs pins available through the LCD panel flex cable. If yours is similar to the one in the picture then you will notice that the main flex cable is for the LCD itself, and there are usually two other flex cables connected to it. The one on the left is for touch panel (if equipped), and the one of the right is for the back light LEDs (sometimes it is connected on the backside of the flex).

In this panel and on mine (a little different from this) they are labeled as K1, K2, K3 and K4 which are mostly the Cathode side of the LED (negative side) and they are exposed as separate pins in the main flex cable, while the Anode is soldered to the main flex cable Vcc plane and cannot be easily accessed without desoldering the LED flex cable. 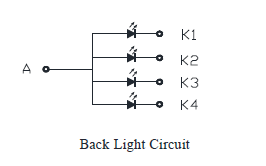 So in ordered to control the backlight you have to cut the trace on the PCB (not the flex cable) and connect it to a transistor which you control through the Arduino.

I have successfully dimmed the backlight on a ili9341 by simply modulating the pin the LED pin is connected to.

Note, I am using a teensy 3.2 your mileage may vary.

Not the answer you're looking for? Browse other questions tagged tft or ask your own question.