I am using the visual micro extension for Visual Studio 2015. I would like to not use any .ino files since I'm trying to setup cppcheck which doesn't recogonize .cpp files, and its just what I'm used to. However when I change my project.ino file to project.cpp the compile option is no longer available (I assume its looking for a .ino file). Is there a project setting I can change to fix this?

Make a new tab in the IDE (top RH corner) with a xxx.cpp file name. Put your code in that. Leave the .ino file blank. Then it will compile. You need to add:

More information: How to avoid the quirks of the IDE sketch file pre-preprocessing

To clarify the question about libraries ...

You do need to put into the .ino file an include for any libraries used in the project. For example:

This effectively triggers the Arduino build process to link those libraries into the final executable file.

Related, my reply in this thread: Classes and objects: how many and which file types do I actually need to use them?

As you have found, Visual Micro will not consider the project to be an Arduino project if you do not have a "project_name.ino" included in the project

A cheat is to create a "project_name.cpp" and include it in the project. This will cause the .ino to be ignored during compilation.

EDIT: The project_name.cpp takes priority during compile, therefore the .ino just becomes a dummy. However the .ino will still be used for intellisense. The cpp should be #included in the .ino along with any libraries you want discovered by intellisense.

The Visual Micro release yesterday includes automatic "library in library" discovery which means you would no longer need to put all lib #include's in the project_name.ino. (tip: you can switch the "deep search" feature off for each project via the Visual Micro menu. It slows the compile down with large libraries) 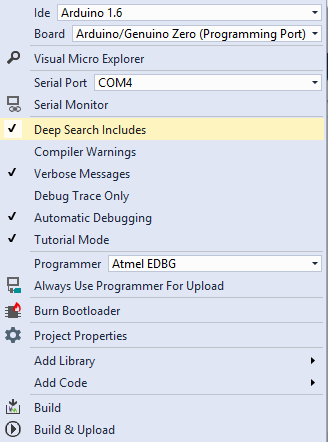 Not the answer you're looking for? Browse other questions tagged build visualstudio ino or ask your own question.

21
Classes and objects: how many and which file types do I actually need to use them?