Atmel Studio 7 features seamless one-click import of projects created in the Arduino development environment. Your sketch, including any libraries it references, will be imported into Studio 7 as a C++ project. Once imported, you can leverage the full capabilities of Studio 7 to fine-tune and debug your design. Atmel Studio 7 fully supports the powerful embedded debugger on the Arduino Zero board. For other Arduino boards, shield-adapters that expose debug connectors are available, or switch to one of the many available Xplained-Mini/PRO boards to fully leverage the Atmel HW eco-system. Regardless of what you choose, you will surely make something amazing.

I wonder how they do it? Is it just a plug-in meaning that we still have to install Arduino software? Or do they have their own compiler and debugger?

It is almost always the case that a high-level environment like an IDE provides an interface to an existing tool-chain rather than being truly an all-in-one mega-application, which would a maintenance nightmare. Atmel Studio 7 is no exception, and according to Atmel, uses and includes (quite likely by downloading it during the install process) the GCC tool-chain.

Why Atmel Studio asked about Arduino IDE path when I try to import Arduino sketch?

Probably for the Arduino libraries, which are contained within the Arduino IDE executable.

Atmel Studio allows for the arduino .ino file to actually be compiled as a c++ project. Doing so allows true debugging, and stepping through all arduino code. It was actually insightful as it walked me through ARDUINO's main() function, which is normally tucked away nicely in a library never to be seen.

The IDE allows for highly useful features such as refactoring, find and replace, syntax highlighting and much more. I found it very useful, and a pleasant upgrade from the arduino IDE.

I often switch back and forth between the Arduino IDE and Atmel Studio, very easy to do.

Installing the Arduino software allows Atmel Studio to locate the libraries when it is installed. 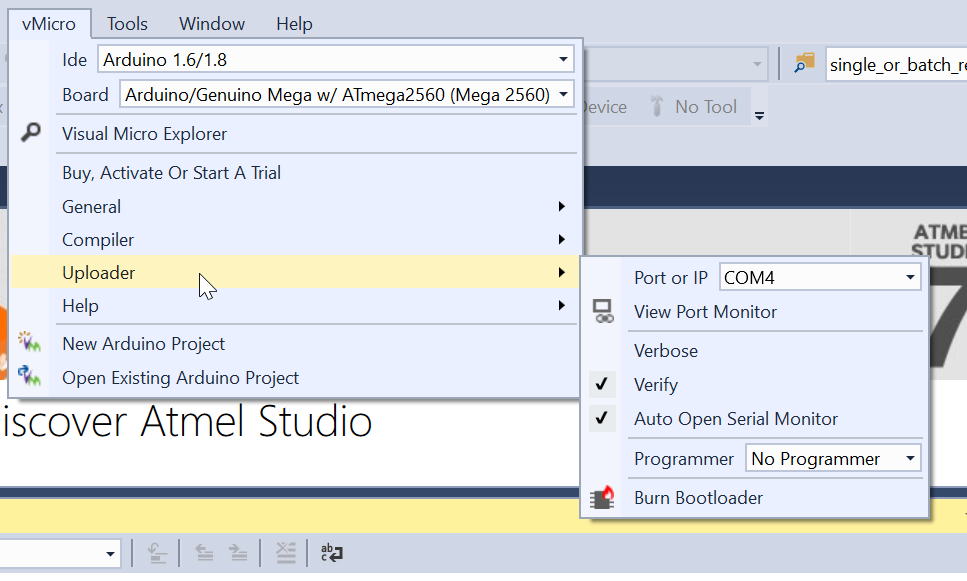 Not the answer you're looking for? Browse other questions tagged atmel-studio or ask your own question.