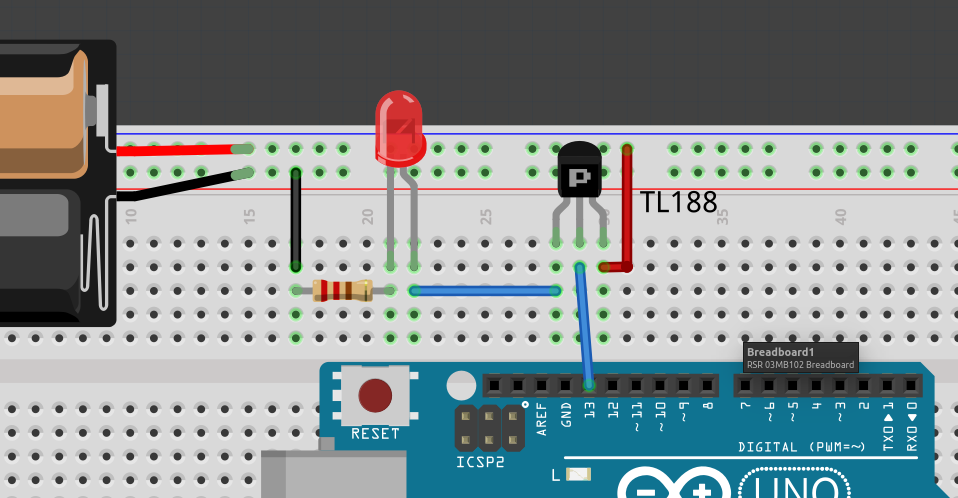 (The resistor I used was 150 ohms, and I forgot to change the resistor value in the diagram.)

I know that the connection that I made is completely wrong. Can someone explain me how and also why the LED on the Arduino Uno was dim?

You should have a resistor of a few hundred ohms on the base connection of the transistor - that is, between base and pin 13.

A PNP transistor is somewhat harder to get to grips with than an NPN transistor. Much of it does things backwards.

The operation you see seems to be completely correct when you understand how a PNP works.

With and NPN transistor a high voltage on the base turns it on and a low voltage turns it off. The opposite is true with a PNP transistor.

*That is a little crudely put, but kind of illustrates what is going on.

It really doesn't matter if you use a PNP or NPN transistor, they are just mirrors of one another. If you have some common anode displays then just start directly with the PNP's.

The flaw I see in your circuit is that you should always use 2 resistors to drive a LED (See schematic). R2 (as you already have) will limit the current to the LED; 220 Ohm you as illustrated is fine.

R1 is needed between the I/O pin and your transistor. This will limit the current through the I/O pin. For what you are attempting a resistor in the range 1K to 2K should do, even if you're switching a few LED's in parallel. If you provide complete details of your setup we can always refine the calculations. One can then take into account the total currents from your displays, the amplification factor of the transistor (hfe) etc. 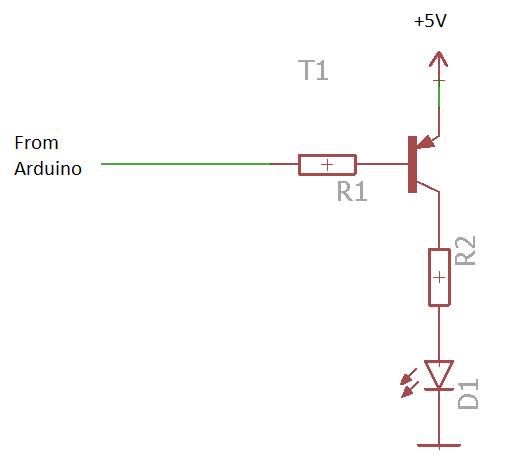 Not the answer you're looking for? Browse other questions tagged arduino-uno transistor or ask your own question.

2
Use transistor to press button on external device