I am getting constant values and I need to know the amplification of the circuit. I believe that amplification = R8/R6 though I am not sure. 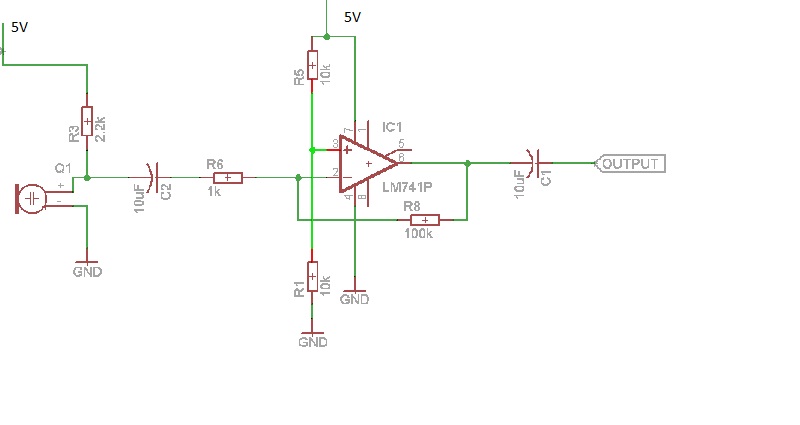 You are mostly correct Diana. The gain of an OP-Amp would normally be R8 divided by R6.

However, what needs to be recognized is that in your circuit, the resistance of R3 and the microphone get entangled with your R6.

The resistance (impedance of your microphone) is in series with R6. R3 also comes into play, but I will ignore it here (subject of another question on amplifiers).

So, since R of microphone is in series with your R6, your gain (amplification) will be slightly less than you have calculated.

The old 741 Op-Amp won't work very well (probably not at all) with a single ended power supply of 5 volts. Although you have done a good job of biasing the non-inverting input (+) at 2.5 volts.

The 741 output can't get near the +5 volts, nor can it get near ground. Try a better Op-Amp such as MCP6002. Look at how the output of the MCP6002 can approach the rails (your power supply and ground).

Not the answer you're looking for? Browse other questions tagged arduino-micro op-amp or ask your own question.