How to program AVR in Mac OS X?

In our college we are using a module developed by IIT Bombay (called FIREBIRD V[ver 5]). It has ATmega2560 and ATmega8 microcontrollers (master and slave) with bootloader.

The staff uses AVR Studio for programming. But since AVR Studio is supported only on Windows (and I have a Mac), I was looking for AVR programming in Mac. I downloaded Crosspack AVR. But I don't know how to proceed after this point. Also I downloaded TextWrangler (because I was told auto-suggestion is not available in TextEdit).

Also I have downloaded the Arduino IDE, and I don't know what is required or how to configure it to program AVR microcontrollers.

I searched on the web and nothing is clear (mostly they all depend on something to do with terminal and the command line).

I don't have Xcode installed in my Mac (I saw a relatively easy tutorial on how to set up Xcode for this purpose) and the file is 4GB. I am trying to work around using Xcode, but if it's the only nice way do let me know!

Pertinent suggestions would be helpful.

First, install and get familiar with version 1.6.x of the Arduino IDE. Then, under the sketchbook directory, within hardware/nex/avr/ (create the directories if they don't exist) create the following files:

I have verified that an empty sketch will build, but do not have the hardware to test uploading. The upload.protocol value may need to be changed to avr910 or arduino if the current value doesn't work. Make sure to restart the IDE after any changes to the configuration files.

Further improvements that can be done include:

If you don't want to use the Terminal and the command line, the Arduino IDE is your best option. Get yourself an AVR programmer (or an Arduino Uno to serve as programmer, with the ArduinoISP sketch uploaded), and code on it. 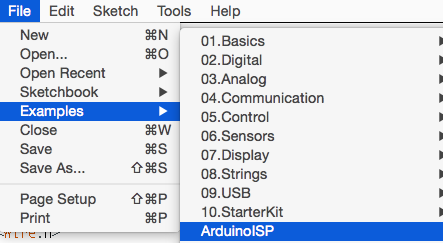 Then connect your Arduino to your module via SPI. Select the correct processor and port.

You can now upload the sketch: 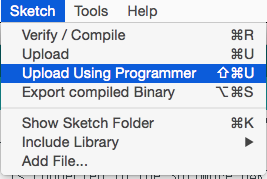 Not the answer you're looking for? Browse other questions tagged avr mac-os avr-toolchain or ask your own question.

0
Mac Power via Keyboard Shortcut?
3
Can I program AVR Microcontrollers using Arduino Development board with AVR Studio?
1
How to program a CLK signal and its inverse with Arduino/AVR
0
Porting ATMega8 AVR based program to Intel Curie Processor
0
Using Atmel Studio with Arduino Starter Kit (Uno MCU)
0
avr-gcc -D is ignored
0
Equivalent to POSIX mmap() in AVR-libc
0
Why is Toolchain Not Updated with Arduino IDE Install on Mac