How to check if a pin is set from bank?

How would you go about checking if an input pin has been set using the entire bank? I am thinking that I need to use bit twiddling with a bit mask but I have not used this enough to figure out how to do what I want.

Basically I have the following code:

But the code above is not working how I expected it to. Has anyone tried to use this approach before? Am I going about this the wrong way? I figured since I was using all 8 pins from one bank, it would be better to check if any of the pins on that bank have been set instead of checking each individual pin. My thinking on this was to prevent any user input from being skipped in case a button press was initiated while the program was running other code. This way I only check if anything in the bank has been set saving time (I think).

The problem is here:

Since the pullups are enabled, the default state of the pins is high. To detect a "press", they have to be pulled to ground. This changes the test to:

And for individual pins:

The simplest way is to use DigitalRead in a loop. It makes your code more portable, and easier to read.

I'm not really an expert in "plain avr code" but I've modified arduino blink and got (almost) a perfect example. Placed a jumper between 5v and pin 8 of arduino and uploaded the following code:

according to following picture pin8 on arduino is PB0 and pin13 is PB5. So using DDRB I set PB5 as output and all others as input. Then in loop I check as you do PINB register and use bitmask to check first pin (the PB0). And it works... well not quite well. For some reason the loop goes a few times more before goes really low. I believe is because I just remove the jumper and do not actually ground pin 8 ( is left float) and maybe the extra loops are discharging some capacitance on that pin 8. 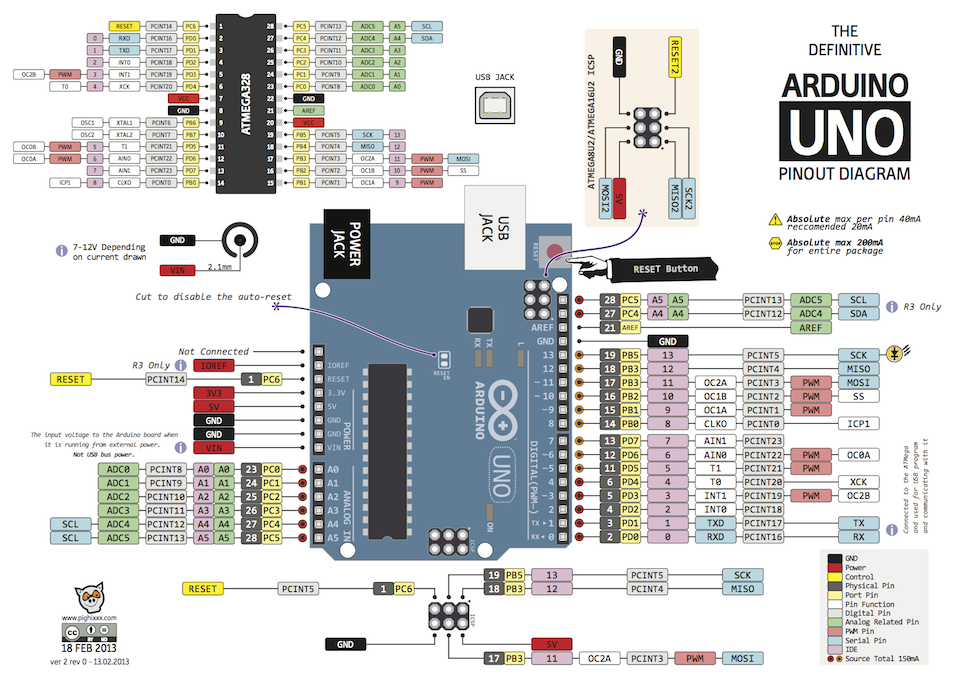 So, to your specific question, your bitmask is right. This instruction PORTA = 0xff; is useless because, as far as I know, this settings are ignored because you set Pin direction in pins of PORTA to input. However, according to that image, atmega328 doesn't have a PORTA. Is that your error or are you using another microcontroller?

EDIT Capacitance thing is confirmed, maked it swing between gnd and vcc with a switch and all works fine.

Not the answer you're looking for? Browse other questions tagged programming arduino-mega avr input or ask your own question.

1
Digital input pin voltage treshold (voltage to register 1 or 0)
1
Get pin input status without using the arduino library
2
Creating Sine wave with DAC and feeding it back
0
Reed Sensor matrix for chess board query
0
Replicate output of pwm pin on another output pin?
3
writting to buffer from serial input
0
Streaming integer data from Arduino to Java, integer greater than 0xFF
4
How do I transform data for a column to data for a row, for a led matrix