I'm using 2 SRF02 sensors on the same Arduino board to attempt to have the transmitter only pulse the 40 KHz wave, while the receiver will be only taking a fake range, i.e. picking up a reading based on another transmission.

I've been using SoftwareSerial and need to know how to synchronize the time for the receiver to know when the transmitter sent the data. What I found is that I'm going to have to do this using start and stop bytes to set them in the same cycle.

How can I do this?

This is my current code:

will send a sound burst, delay 70 ms, then start listening for the burst, which by then will have traveled around 24 meters and probably be no longer audible.

You should instead start the fake range listener immediately after sending the burst. The general idea for one approach is as follows:

Note use of command 0x58 instead of 0x57 to get microseconds instead of cm. If you used 0x57, instead of adding t2-t1 to t3, you would add t2-t1 microseconds-converted-to-cm to a cm reading.

The reason for the computation tm=t3+t2-t1 is that the second command is issued about t2-t1 microseconds later than the first command, as explained in the next paragraph.

I doubt you should have the delayMicroseconds(100); statements in SendCmd(), and would recommend getting the code to work ok, then see if it still works ok when you take them out. The delay(10); is unnecessary if you rewrite your 2-character-wait correctly (ie as a while rather than an if), and the delay(70); is unnecessary if you start conversion with command 0x5A, “Fake Ranging Mode - Result in centimeters, automatically Tx range back to controller as soon as ranging is complete” and then properly wait for two characters to arrive, instead of a blind wait followed by a test if they've arrrived.

Hey thanks for the input. When I created t3, I get an error saying void value not ignored as ought to be.

This is my updated code based on your suggestions, jwpat, although I did not understand your comment with delay(70); not being needed if I start conversion with (2,0x5A).

After running this code my results keep being the following values regardless of me shifting the distance between the sensors: 72cm 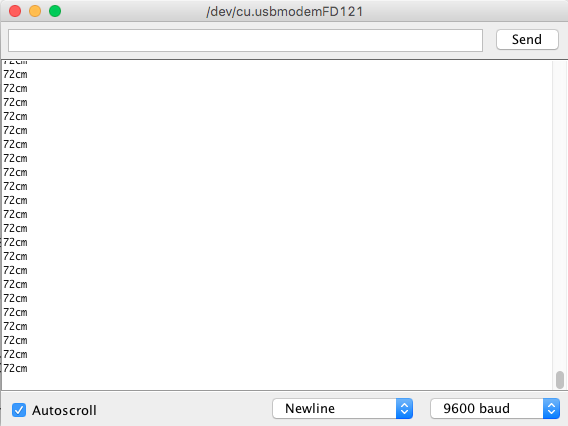 Not the answer you're looking for? Browse other questions tagged uart or ask your own question.