Why is the LED on unless I set pinMode to output? Have I broken my UNO or is this normal? I swear it wasn't like this a few days ago.

The LED is driven by an op-amp (see the schematic). When the pin is configured as input the op-amp has an undefined input (floating input). Thus it may or may not turn on the LED. If you configure it to an output the op-amp is driven in a known way. 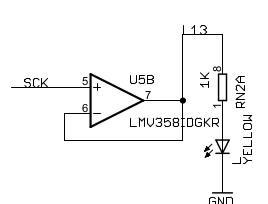 Why is the LED on unless I set pinMode to output? Have I broken my UNO or is this normal?

I think they did this to stop the LED "loading" the SCK pin (pin 13), particularly if you have it configured as an input and are trying to measure something, the 1k resistor and LED would throw out the measurement.

You could conceivably have a pull-down resistor from SCK to GND, but that would load the pin as well.

Apparently it's normal. Although random. Sometimes the default voltage of the pin is high enough to make the LED light up because of the op-amp. Sometimes it isn't. Source: https://electronics.stackexchange.com/a/39707

If SCK is set as an input then pin 5 of the op amp goes high (pnp transistor input stage) and the op amp output goes high turning on the LED.