How can we make the Arduino board interact with old, analog telephone, and to make phone calls?

I guess it involves connecting the board to the telephone with some specific cable (how it's called?)

In addition, I assume it will require us to use the telephone low-level dialing protocol (in order to actually interact with the phone and to send commands). Where can I read about it?

Is there a reason to concern about conversation between the digital/serial board and an analogous device?

By the way, I've read that analog telephones have relatively high voltages that can easily damage the board. I'd love to get any information about things like this, related to connecting Arduino to analog telephones, in order to know about such issues and about what to be concerned and to explore.

Buy an external voice modem with a RS-232 connection. Connect it to a RS-232C shield. Use AT commands to dial numbers and pick up calls. Use voice AT commands to transmit or receive audio.

Never attempt to connect the telephone line directly to an Arduino since, yes, you will fry it. The voltage is all wrong in the first place, and goes even higher when the phone line rings.

Connect a microcontroller to a telephone line is a rather technical task and requires knowledge concerning the operation of the line, but it is not an impossible task, although it can be dangerous, and sample some nasty shocks if you're not prepared for such work.

Initially you should build a rectifier circuit, mainly for its polarizing power circuit, since you do not know which is the antibody positive your telephone line but know that tensions are measured inversely ie, when measured with respect to ground (GND) the measures will be negative, this is because it was discovered that the poles of the batteries used to be gnawed less well when connected to the system.

A second step is you develop a small coupler to avoid connecting your circuit directly to the telephone line. For this you can use a pair of low-pass filters, which are placed at each connection point of the line after the bridge rectifier, and the downside of the bridge rectifier is connected to ground your circuit with this filter. And the plus point is connected to a PWM output of your controller.

Other important information you can not connect the PWM port directly to this filter, because the voltage levels in the telephone line are quite different, namely:

To match the level of your line voltage with the telephonic system you can use a voltage divider which has an output of 0 to 0,7Volts ie when the door PWM pulse maximum output voltage of 5V should be 0,7Volts the divisor resistive. Another way is to use an operational amplifier having a gain reverse, thus reducing output. you can also use a optoacoplado circuit with 4n25 and thus polarize the phototransistor for such variation with the pulses in your diode.

Another important component in this circuit is a pair of diodes to be done clipping the signal, ie, as our voltage limit for audio is 0,7Volts after the filters put a couple of diodes between the positive and negative of your signal filtered in the bridge rectifier, so prevent signals above this level reaches the arduino when ouver noise on the line. 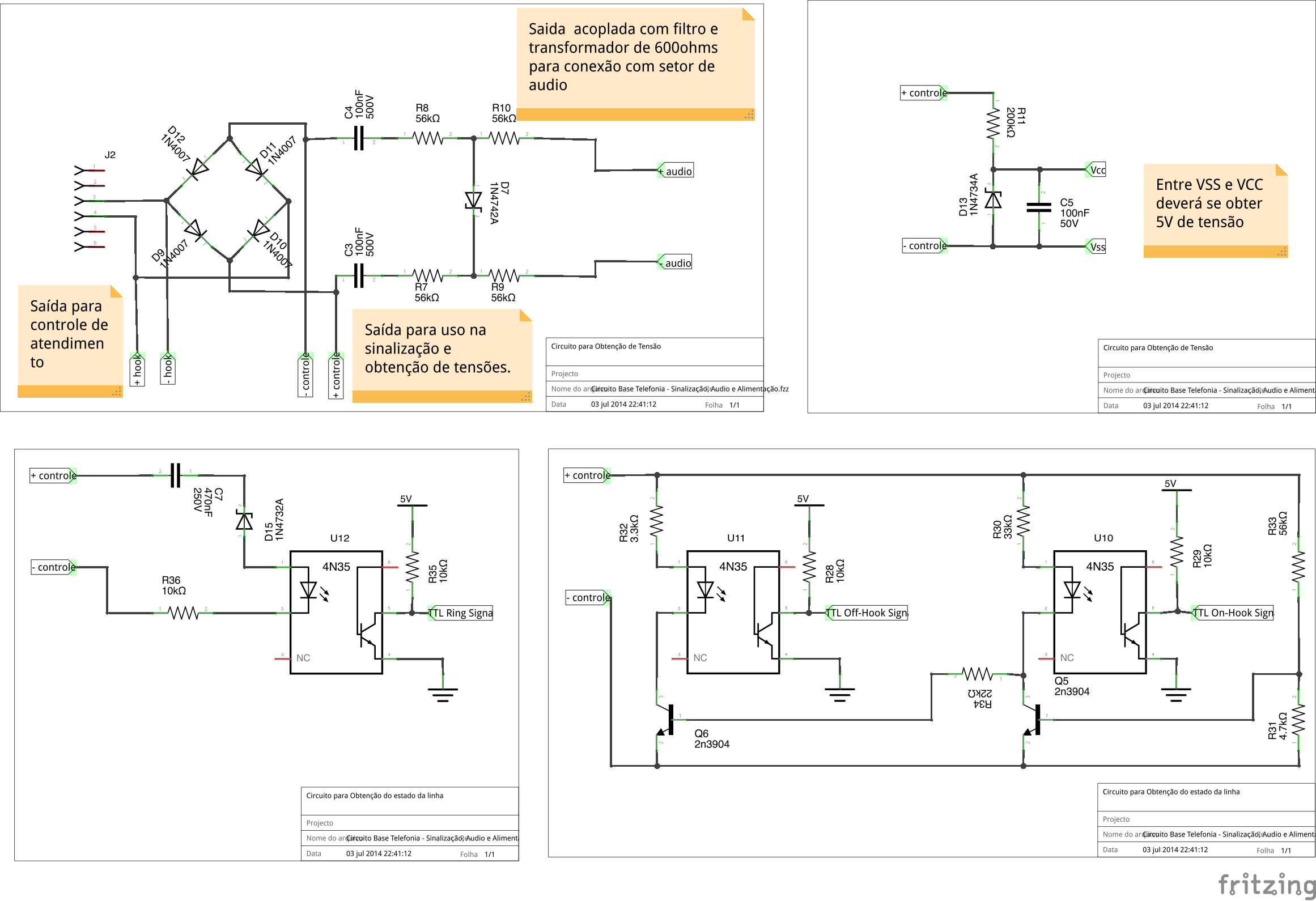 2
How to write data in RAM memory using Arduino Uno or Arduino Due?
5
Connecting an Arduino to a telephone line?
3
Working with Seed BLE Shield and Adafruit Feather BLE
1
Can i supply the AREF pin with an Analog pin from the same board?
0
Combining code for two sensors in one programming
0
Sampling rate of multiple analog pins on Arduino
2
Arduino UARTS Auto addressing slaves