I know this question has be asked before on this site. However it was never really answered. I have an Arduino Uno. I am trying to get it to read a 2 GB SDHC Micro SD card. The problem is, the SD card never intializes. I am not sure if there is something wrong with the wiring (which I think is NOT the issue) or the SD card/shield. I have formatted the SD card, but perhaps I did use the wrong settings to do so. Additionally, this SD card is quite old, probably several years. It can still be managed on my PC however.

I bought the following Micro SD shield off Amazon. It has the pins VCC, GND, MISO, CS, MOSI, and SCK, for which I figured the following:

I have the circuit wired in the following way:

The image below is a compilation of the closeup of the shield and my wiring. Not that I am also using Pin 9 in the picture. However this is used for a different portion of the circuit. 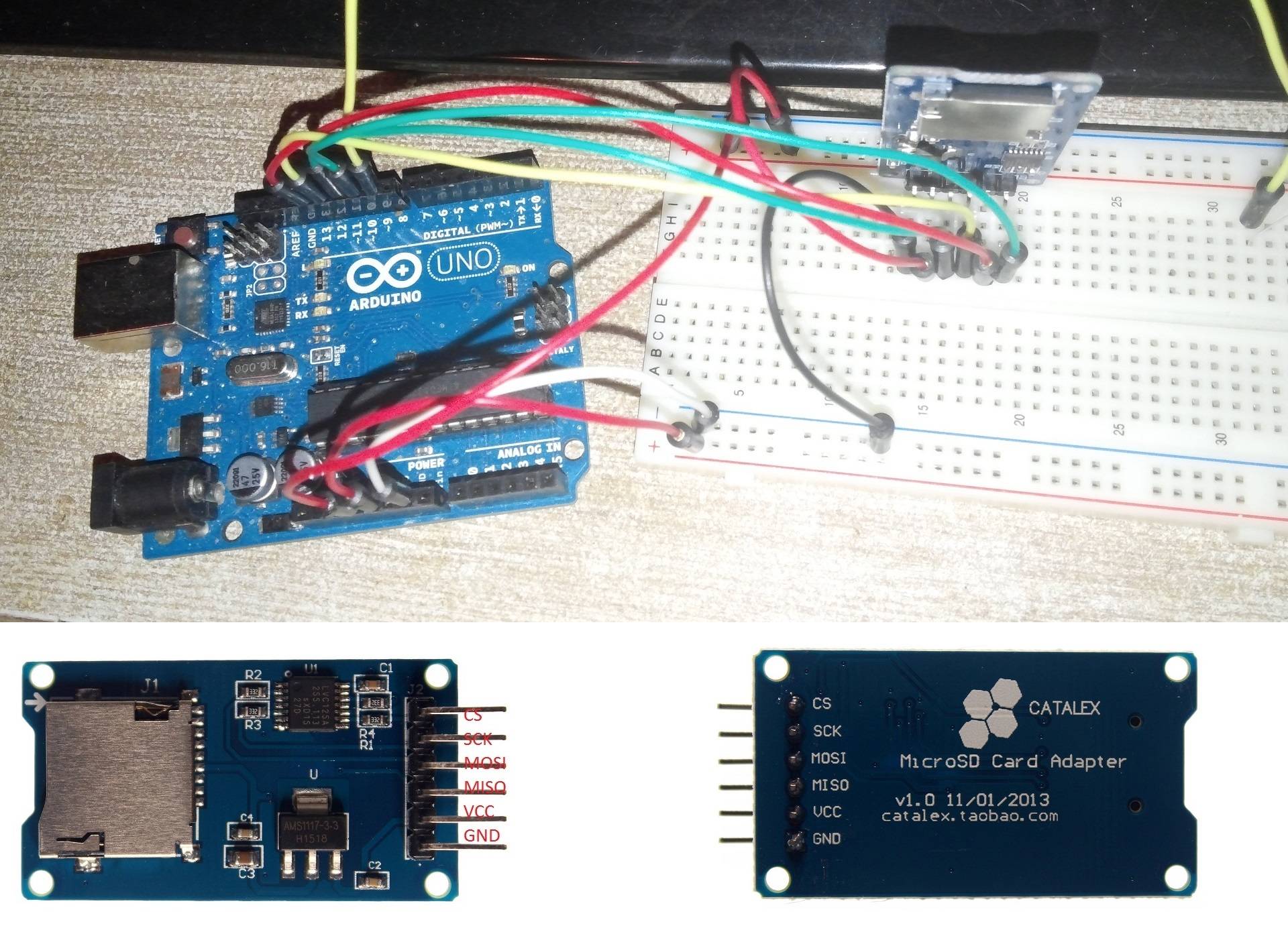 The code that I am trying to run comes from the SdFat library. Though the Amazon page says the device can be used without this library, I prefer to have it. I am running the SdInfo.ino example located in SdFat/SdFat/examples/SdInfo/. I have changed the coding so that:

I have also tried running the Basic.ino example in the TMRpcm library, located at: TMRpcm/examples/basic, but this doesn't work either. Below is the code:

In short. My SD card does not initialize, and I cannot seem to figure out why.

The first thing to try is to use the 'proper' pins for the SPI:

Try that first and see how you get on.

By the way, just thought I'd mention, probably worth just following the Adafruit example word for word as I'm guessing your board is pretty much a good fit for this tutorial:

good luck getting it rockin' ;)

That breakout board includes a 3.3V regulator and level shifter. It should be powered from 5V for proper operation.

Also, as @Andology mentions: use the correct SPI pins.

If you have checked everything (wiring, coding your correct pin etc), AND you have already formatted the new card with the correct sd formatter and/or fat32 formatter, and it still does not work; I have found the following worked on some cards: Simply create an empty (0 bytes) file on the new card. Cards that were returning all kinds of funny errors (like they are too small - or simply won't initialize) magically start working !

The solution to this problem, is that you have to let digital Pin 10 as output (for the SD library to work) and put out a logic HIGH by adding “digitalWrite(10,HIGH);”. For Arduino Mega you have to do exactly the same ignore pin 53 completely though the comment asks you to change it to 53.

Not the answer you're looking for? Browse other questions tagged arduino-uno shields sd-card tmrpcm or ask your own question.

2
Why is SD card failing to begin?