I found an LCD for my Arduino Mega 2560 that's parallel (I like that, I don't like SPI), but it works at 3.3V and isn't 5V tolerant. That's why I'd need to use level shifters, but that would use too much space and I'd like to power the microcontroller with 3.3V. But that would cause problems because the USART communication is set to be on 5V and that can't be changed.

Is there a way to power my Arduino at 3.3V? Is there an alternative Arduino for that?

Also, if there is, I'd need to have a 16MHz crystal on it. I know it's overclocking, but Gamebuino works at 16MHz on 3.3V and I would like to do the same.

Have you considered maybe using the Iteaduino MEGA2560?

If I'm reading this right, the Iteaduino schematics and a typical Iteaduino features list seems to say it already has a 16 MHz crystal.

It uses the same ATmega2560 processor and has the same I/O arrangement as the Arduino Mega 2560, but it runs off 3.3 V. It doesn't have the 16 MHz crystal you wanted, but if you really insist on overclocking, perhaps you could replace its 8MHz resonator with a 16 MHz crystal? 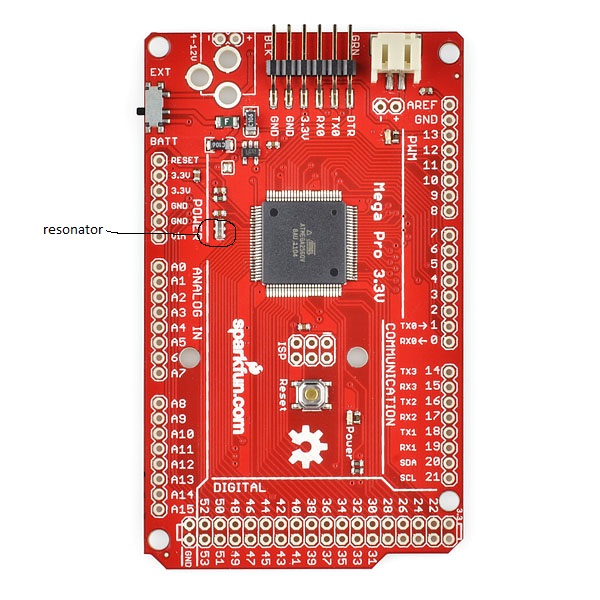 Have you considered maybe using the Inhaos Buono Mega 2560 (see a), also called the Inhaos Mega2560?

As far as I can tell, it is pretty much identical hardware as the Arduino Mega 2560 -- including the ATmega2560 processor -- except it has a selector to run the ATmega2560 at 3.3 V, so its I/O pins can be directly connected to 3.3 V modules.

What about a 3.3v Arduino Pro Mini, you'll need to solder headers but that's not too onerous. See here Arduino pro Mini or even cheaper from eBay

Not the answer you're looking for? Browse other questions tagged arduino-mega voltage-level or ask your own question.

9
How can a 5v Uno talk to a 3.3v Due?
1
Why does an Arduino MEGA 2560 have different PORTS
1
Is a power off sufficient to avoid problems with the Watchdog on Arduino Mega 2560?
6
Confusion with ATmega328P and 3.3V/8MHz
3
Mega 2560 & smoking/burning 5v requlator, probable cause?
1
System voltages: Can I use a 5V touchscreen shield on a 3.3V arduino?
0
Arduino MEGA with RTOS
1
Arduino Nano 33 battery power/charging