I'm planning to monitor voltage of a 12V battery with an Arduino's ADC pin connected via a voltage divider. Since I don't want the circuit itself to drain the battery when not in use, I want to use a transistor to "enable" it via an Arduino DIO pin like: 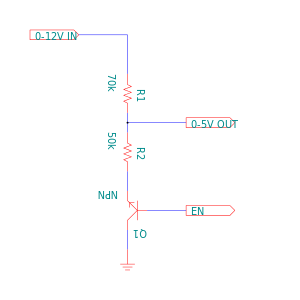 Is this a safe circuit to use?

If I set EN low to disable the divider, will that risk putting 12V directly on the ADC pin and burn it out? I've found alternative designs, but they seem overly complicated.

Edit: The battery is a Lipo which is also powering the Arduino through a step-down DC converter.

I use a similar system on a product I recently worked on to monitor the battery voltage - and of course I didn't want it on all the time to drain the battery.

The trick, though, is to do the exact opposite of what you are doing. Instead of isolating the ground (which leaves the battery then directly connected to the Arduino) you need to completely isolate the battery from the divider. 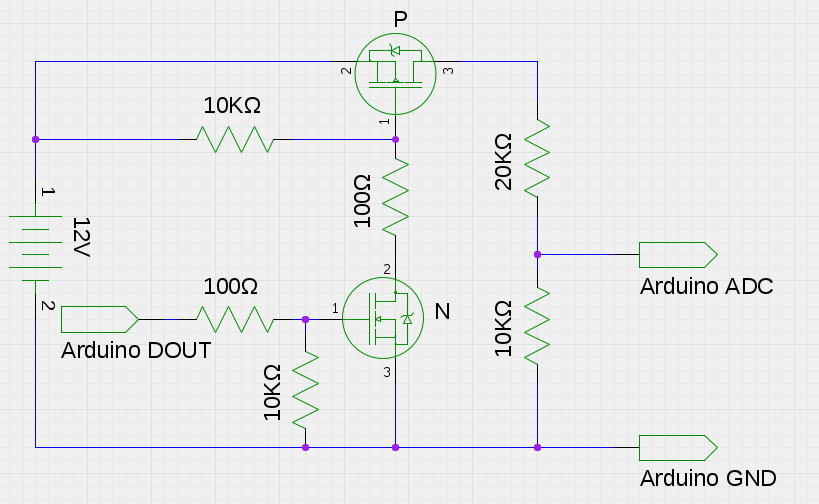 When the P channel is OFF the only circuit connected to the ADC is the connection between the ADC input and ground through a 10K resistor, so everything is happy and safe.

You should not use resistors greater than around 10K in size on the input to the ADC because the ADC itself has a resistance (the impedance) which is placed in parallel to the lower resistor of the divider. If the divider's resistors are too large that impedance will affect the accuracy of your readings because the total resistance of the lower resistor will be skewed slightly. Yes, it's possible to compensate in software, but as long as you keep to a limit of 10K or so for the resistors you won't need to worry about doing such things.

As an aside, the only other way of achieving this whilst maintaining the isolation of the ADC from the battery would be to replace the P channel MOSFET with a small relay (say a reed relay), but then you still have to build a relay driving circuit which is just about as complex as this one.

I'd use some very large resistors (e.g. 1 and 2 Mega Ohm), and add a small capacitor to the center, to stabilize the value during sampling. Using 1 and 2 MOhm would result in 10uA of current loss, which is probably negligible in your cases. 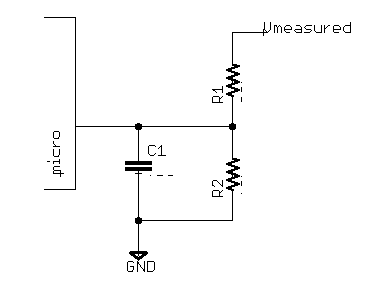 Not the answer you're looking for? Browse other questions tagged analogread voltage-level or ask your own question.

54
What are the 5V and VIN pins for?
3
How to wire an analog IR sensor for digital input?
1
How to read Arduino voltage
1
Arduino Voltage Divider
1
powering arduino with a voltage divider to increase lifespan
3
How can I create a battery level circuit
2
Measuring 12 V via voltage divider: choosing the right resistors
2
Arduino Nano 33 battery power/charging