I'm new to the arduino and to EE in general. I've built the basic examples and a, now trying to get a deeper understanding of what the physics is doing. As such, I'd like some help in understanding the diagram here:

Specifically,it seems that the flow is going from Pin 13 to Ground. Is the diagram using the conventional flow or the electron flow approach.

Question 2: This is about bread boards, like one shown here:

2) Also, is it again the electron flow notation so that from Pin 13, the electrons flow to the + (red), then to one of the lettered columns and then to whatever component I have?

Thank you for your help! I realize these are basic questions but I want to go a little beyond building the examples and start trying things out myself. As such I want to make sure I'm getting the theory behind it right!

The thing to remember about electrons is they are a negative charge. That means that the direction of current flow (positive charge) is opposite to the direction of flow of the actual electrons (negative charge). Picture it like those "compression jams" you get on the motorway (freeway) where cars that are travelling too close together have to slam their breaks on to avoid running into each other. The one at the front slams its breaks on briefly then carries on. The one behind has to do the same, and so on and so forth. You then get a wave effect travelling in the opposite direction to the direction of travel of cars as they slam their breaks on in turn. The cars are moving forwards, but the compression jam is moving backwards. Similar in a circuit - the electrons are moving forward, but the charge is moving backwards.

Another way to visualize it is as a bubble in a pipe of stationary water. The bubble moves in one direction, but in order for it to do that the water has to flow past the bubble in the opposite direction.* 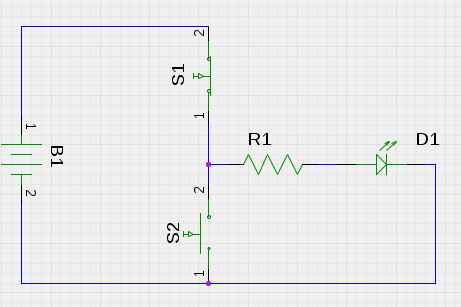 You can see that S1, being on, forms a circuit between the battery and the LED to allow the current to flow.

When the IO pin is set to LOW the circuit looks a bit like this: 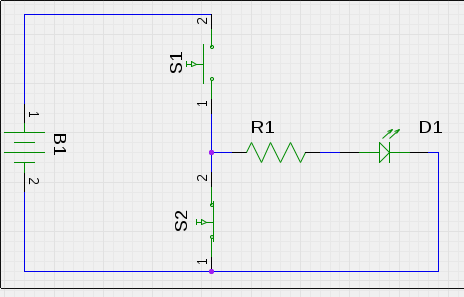 You see that S1 is now turned off, and S2 is turned on. the connection from that battery is now broken, and current can't flow.

But, you ask, what is the point of S2 here? It doesn't actually do anything. No, not in that circuit it doesn't. But consider if you re-arrange the circuit to be like this: 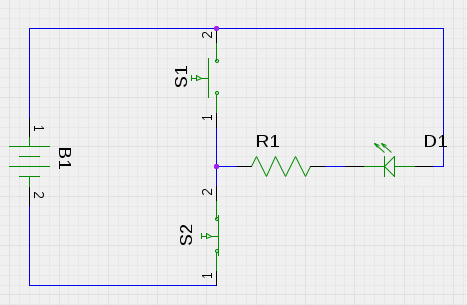 Now it's S2 that is controlling the connection to the battery. S1 is now the redundant switch.

This leads to some terminology.

When S1 is closed the IO pin is said to source current since it is pretty much connected directly to the positive power source.

When S2 is closed instead the IO pin is said to sink current since it is connected to ground, so current can "sink" down to ground through it.

As far as breadboards are concerned - they are just collections of metal strips that are used to join wires and component leads together in whatever way you need to. There is no one part of it that is any different to any other, and there is nothing that says you must use this bit in a certain way, or that bit in another way.

Your typical breadboard has sprung metal clips that are arranged in this pattern: 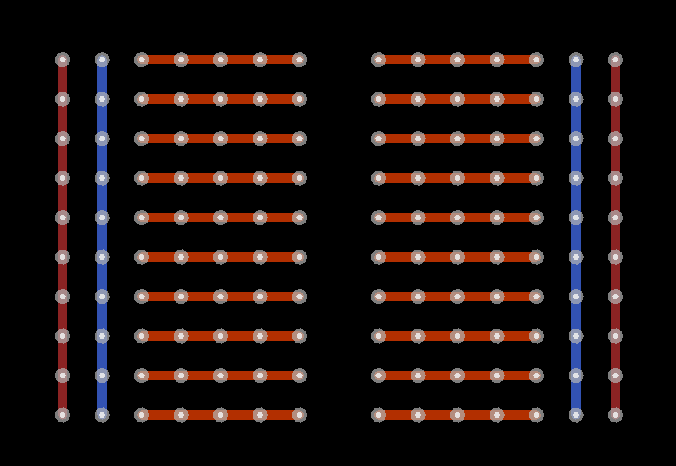 You can use any collection of holes for any purpose you choose.

That said, normally the blue (or black) marked line of holes down each side is used for ground, and the red line of holes is used for power. As both sides of the board are separate it is possible to use different voltages on each side, or the same voltage on both sides, etc. That can be especially useful when you're working on a circuit that has, say, +3.3V and +5V in it. Another common split usage is for a positive voltage on one side and a negative voltage on the other - common when working with op-amps. Just remember which is which.

* This is a complete lie, but it's as close as you need to know at this point in your education. https://en.wikipedia.org/wiki/Lie-to-children

It doesn't matter whether you use conventional current or electron current to describe a circuit; in the end they give the same results.

Protons are not a charge carrier in 99.99999% of circuits; positive charge carriers are the quasiparticles known as holes, but they only flow in semiconductors.

Protons don't flow. They are part of the atom nucleus. If they flowed the copper wire would be flowing. Electrons are what flow, particularly if there are some free ones hanging around, like teenagers hanging around a mall.

You don't need to worry about that however. Most people think of current as flowing from positive to negative (ie. pin 13 to ground) even if in fact the electrons are flowing from ground to pin 13.

When Benjamin Franklin made his conjecture regarding the direction of charge flow (from the smooth wax to the rough wool), he set a precedent for electrical notation that exists to this day, despite the fact that we know electrons are the constituent units of charge, and that they are displaced from the wool to the wax—not from the wax to the wool—when those two substances are rubbed together. This is why electrons are said to have a negative charge: because Franklin assumed electric charge moved in the opposite direction that it actually does, and so objects he called “negative” (representing a deficiency of charge) actually have a surplus of electrons.

By the time the true direction of electron flow was discovered, the nomenclature of “positive” and “negative” had already been so well established in the scientific community that no effort was made to change it, although calling electrons “positive” would make more sense in referring to “excess” charge. You see, the terms “positive” and “negative” are human inventions, and as such have no absolute meaning beyond our own conventions of language and scientific description. Franklin could have just as easily referred to a surplus of charge as “black” and a deficiency as “white,” in which case scientists would speak of electrons having a “white” charge (assuming the same incorrect conjecture of charge position between wax and wool).

Quote courtesy of Design Science under this license.

When using a breadboard I connect the 5V pin to the red line, the Gnd pin to the blue line, and other things (signals) to the internal (numbered) holes. The internal ones are connected cross-ways, so that is useful, for example, to put a series resistor for the LED there.

I trust you are using a resistor for the LED, if not you might damage both the LED and the Arduino. See The care and feeding of LEDs.

Not the answer you're looking for? Browse other questions tagged arduino-uno electronics or ask your own question.

3
Do I need to use a resistor if I am using a potentiometer to control an LED's brightness?
1
Adjust resistance of a circuit
3
7-Segment Common Anode
2
How to connect a 12V power supply to an RGB LED strip receiving RGB values via Arduino Uno PWM pins?
0
Is applying 5 volts to LED dangerous?
0
Need help with understanding the CapacitiveSensor circuit diagram
0
LED on same Pin as Toggle Switch, not illuminating
1
Why does the transistor burn out