What changed in the new Due?

I recently purchased a batch of Due boards and find that they are cosmetically different. After attaching the Atmel-ICE and reading the firmware from both processors, I find that the firmware is different. The green masked one had a sticker indicating a new IDE should be downloaded from arduino.

The back of the board shows silkscreen changes to the logo (DUE in an oval rather than rectangle) but both boards say BOARD MODEL DUE R3-E. The traces appear the same, the placement of parts appears the same, and other than different colored headers the parts are similar. The main processor has the same part number, but distinctly different markings. Internally the processors report the same device signature and revision.

What has changed in the firmware? Are there other changes I've missed? Other than needing an even newer IDE are there changes that will affect my sketches?

If I load the older firmware onto the newer Due processors, should it operate the same, allowing use of the old IDE, and in case my sketches do face a problem with the new version? 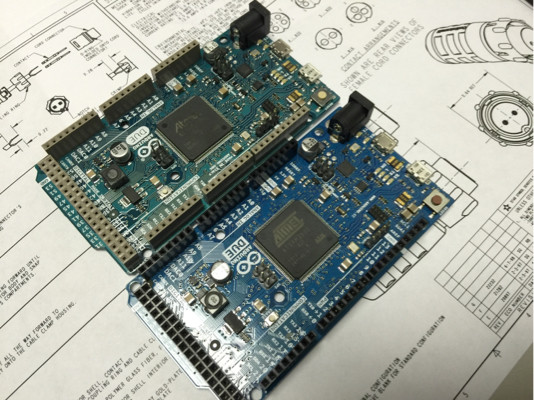 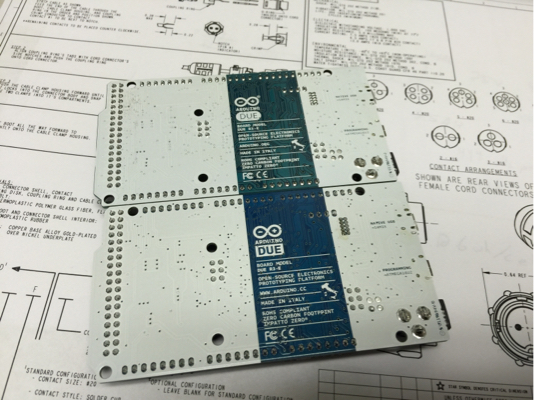 The 'new' board with green soldermask and the lighter headers is made by arduino.org. The old one was probably made by the same company, but prior to the split in the founders.

Right now there is arduino.cc (the original website) and arduino.org (the website set up by the company that split from Arduino). There is a lot of different perspectives about who really owns Arduino and I won't attempt to weigh in here.

The changes in firmware are still unknown. It's likely that they are simple strings or response changes so the boards can be differentiated in software. The new IDE is in alpha, and is yet another attempt to differentiate between the two Arduino groups. I haven't attempted to program either with either group's IDE, but if I do I'll update this answer with the results.

At least there's a way to visually identify the difference once received - wish they had given them different part numbers so Digikey wouldn't have sent me a mixture...

Not the answer you're looking for? Browse other questions tagged arduino-due bootloader firmware revisions or ask your own question.

14
What is the difference between the revisions of the Arduino Uno board?
1
Why doesn't the master branch BOSSA work on Arduino Due?
1
How do I install the firmware on an Arduino Mega clone?
2
Manual Arduino Due Installation
2
Any chance of repairing Mega 2560?
3
Need some explain before desigin my own custom Arduino Due board
3
Can't upload to arduino boards anymore