You may be wondering, how is it OK to connect a 3.3V chip like the TSL2561 to 5.0V data pins like the Arduino? Isn't that bad? Well, in this specific case its OK. I2c uses pullup lines to the 3.3V power pin, so the data is actually being sent at 3.3V. As long as all the sensors/device on the i2c bus are running on 3.3V power, we're fine. However, don't use a 5.0v powered i2c device (like the DS1307) with pullups at the same time as a 3.3V device like the TSL2561! If you want to use this sensor with a datalogger that uses the DS1307, remove any/all of the pullup resistors from the DS1307 SDA/SCL pins. The pullups built into the TSL2561 will then be active and keep the voltage at 3.3V which is safe for both the RTC and the sensor.

You can use the DS1307 itself just fine, but you are probably using a breakout board. These boards have (pull-up) resistors on it that will pull-up the I2C lines to 5v, while you only want 3.3v. This will not damage the arduino, but could damage chips like the TSL2561, that can only handle 3.3v. 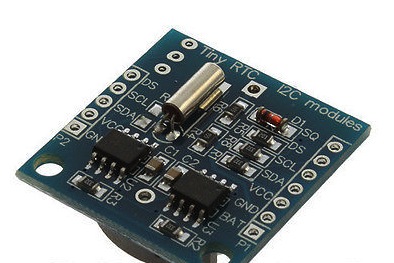 On the board you indicated you are using, you need to remove R2 and R3

Other 5v sensor breakout might also have pull-ups to 5v. Easiest way to check, is to connect 5v and ground, and then measure the voltage on the SDA and SCL pins. If it's 5v, then it has pull-up resistors that need to be removed.

Not the answer you're looking for? Browse other questions tagged sensors i2c pull-up or ask your own question.

1
Arduino and Raspberry Pi - 5V/3.3V I2C
2
Testing tri-state pin - erroneous results with internal pullup
0
Second I2C address not accepted
1
How do I stop 5v on the I2C port of a pro mini so I can use 3.3v devices?
1
Use SPI and I2C in the same circuit (ATtiny85/84)
1
Arduino Uno 2 I2C devices problem
0
Multiple I2C slave devices on Arduino - Pull-up values