Arduino Due and BNO055 address in i2c mode

I have a project where I need to have several IMUs, the BNO055 shuttle board (I explained my project here), I manage to get the Euler angles from one BNO055 sensor, which have the address 0x29, because I linked the I2C_MODE_ADR_SEL to a HIGH level.

I would like to have another sensor with the address 0x28. As the datasheet says, I must link the I2C_MODE_ADR_SEL to a LOW level (to the GND) the i2c Scanner from the Arduino Playground does not recognize any i2c device.

I don't know how to change my sensor address, can anyone help me with this issue ?

I've built MotioSuit, a mocap suit based on the BNO055 which currently has 9 sensors but could go up to 18.

The sensor board and library are open-source and documented in the link, I hope it helps!

Another approach is to use two more Arduino (eg Pro Mini or Micro) units to support separate I2C busses for additional BNO055's. These auxiliary Arduinos could do some data reduction before sending data (via serial or I2C) to the principal Arduino.

Note, it is not clear to me that using more than one or two BNO055's makes sense. If the assemblage of BNO055's moves through space more or less as a unit, but with attitudes, roll rates, etc differing between BNO055's, then 3/4 or so of the data from different BNO055's will be the same. Possibly less-general sensors (eg, without magnetometer) with different I2C addresses could be used instead.

Although this is an older question, I believe there may be people still looking for a solution to this problem. Documentation for the BNO055 Shuttle board is pretty thin. I've added a bit of the schematic below.

BNO055 Com3 (pin 17) is presented on pin 22 of the shuttle board (12C_MODE_ADR_SEL). This pin must be connected through a resistor either to shuttleboard pin 4 (SD0, GND) or to shuttleboard pin 5 (SD1). The datasheet makes mention of 2-position jumper J102 which should accomplish this, but there are versions of the Shuttle board that do not include this jumper or any place to mount it. In the photo of the OP's setup (pasted at bottom in case his link goes away) the jumper header would be installed across the three holes adjacent to pin 3 (GND), and jumping the center pin to the left or right-side pin would set the address to 0x028 or 0x029.

If you don't have the jumper, just connect the pins directly: when I connect pin 17 to pin 4 through a 10K resistor, the Arduino "example" scanner does see it at I2C address 0x28.

Personally I like the Adafruit BNO055 board a lot better than the Shuttle -- it has a voltage regulator and a lot of other additions, and it uses 0x028 as its default I2C address.

For those working in the Arduino code environment and wishing to incorporate more than two BNO055 devices and who do not wish to use a multiplexer, I might suggest looking at the Teensy family of 32-bit ARM cortex CPU boards. These are completely code-compatible with Arduino, but offer more than one I2C bus. In fact the Teensy 3.6 (180 MHz!! with 1M Flash, 256K Ram, 4K eeprom, an FPU) offers four* separate I2C Wire interfaces on different ports, which would permit 8 of the BNO055 devices to be used.

I've personally been very happy with the performance and functionality of the Teensy boards when used with multiple BNO055 devices. 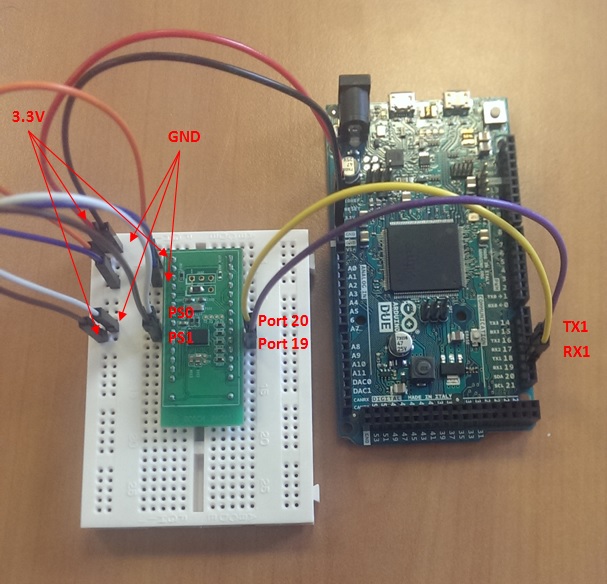 Not the answer you're looking for? Browse other questions tagged sensors arduino-due i2c or ask your own question.