What's the deal with Deno? We talk with a major contributor to find out. Listen now.

I have followed the instructions to run the Arduino processing examples but with no success.

Always import processing.serial.*; does not name a type. Which is perhaps a library (processing-arduino) related error.

My sketch is a sketch that comes with processing-arduino library.

I have searched for a long time with no solution. Any suggestion?

Note: I am testing this on OS X, so my paths may differ slightly from yours.

However this is not the correct usage of this package. This package is intended to be used in conjunction with the Processing application, not the Arduino IDE. You should download Processing and then follow the instructions again:

Thus, on OS X, the path should now be

However, as usual, the documentation on the Arduino website leaves a lot to be desired. Pay careful attention to the following paragraph if you are running OS X or Linux:

Note: if you run Linux, you need to change Arduino.jar into arduino.jar, because Linux is case sensitive and it does not work if you don't change this letter (Arduino.jar is in the folder "library" of this Processing Library).

Relaunch the Processing application. File -> Examples..., opens up a window, scroll down to Contributed Libraries, open that, open Arduino (Firmata), open the arduino_output example. Hit the Run button, and after compiling you should see the window below: 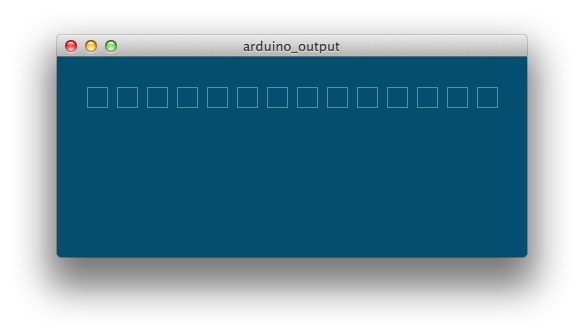 Not the answer you're looking for? Browse other questions tagged serial processing-lang or ask your own question.

13
Reducing lag between the arduino and a processing sketch on my computer
1
Reading text/strings via processing
0
Two or More Arduinos Handshaking
4
Sending serial data in an interrupt
0
“Serial does not name a type error”
0
Entire arrays are not read by Processing sent by Arduino unless cord is unplugged and plugged back in?
1
getting error 'Serial' was not declared in this scope