I am trying to use two 4051 ICs with an Arduino Micro right now. The idea was to have an 16-sensor demo station (8 sensors per 4051) wherein each 4051 pin selection is controlled by a potentiometer as input. I am new to using MUX's, so I mocked the following up as a quick demo based on this help document via Arduino (it's basically the same), which only uses one 4051 and does not use a potentiometer as selector input. So, I should be able to set the variable which to whatever number (0 - 7) to change the sensor selection that shows up at A2 on the Arduino.

Setting which to 0 is fine, but when I have more than two sensors plugged into 4051 and set the selector pin to any other number than 0 there is a strong likelihood that the output that shows up in the Serial Monitor is both unresponsive to the selected sensor change and appears to be simply noise (random numbers around 200 or so). I have been trying to isolate where this noise is coming from and am totally stumped. Has anyone had this issue and, if so, any suggestions on how to further diagnose what is happening? I am currently powering everything off of the Arduino 5V, which I am under the impression should be okay, though I have tried this with external power supplies (12V at 2A, for example) and gotten the same results (so I am fairly certain power is not the issue here).

I have a post about that chip at 74HC4051 multiplexer / demultiplexer.

I made up the circuit shown on my page above with modifications as described below: 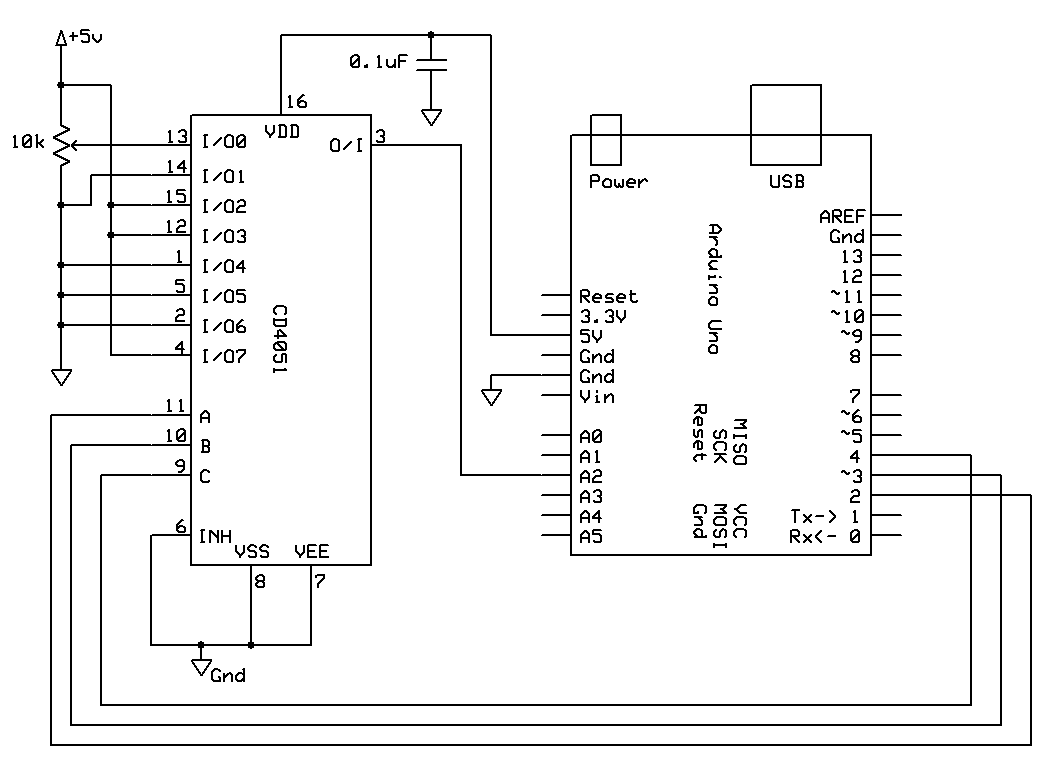 I moved the A/B/C and O/I pins to match your code.

I also modified it to automatically sequence through all 8 possible ports, and then stop after 1000 iterations to stop flooding the USB port on my computer. Code is:

The output from your sketch was as expected:

I suggest you check that your wiring agrees with mine.

Not the answer you're looking for? Browse other questions tagged power arduino-micro multiplexer or ask your own question.

0
Arduino Micro + Max4466 - Noise on A0
1
Issue with CD74HC4067 MUX on high values
0
Different sensor readings on analog input when connected via USB to self-contained/externally powered
1
Multiple HC-SR04 with one 5v 7805 regulator
1
multiple multiplexer (4051) - how to process the inputs?
1
How to select hardware for my Arduino board?
1
Is it possible to overload the digital pins for an Arduino?