Using an Arduino as an LED controller for an arcade stick

I'm attempting what seemed to be a rather simple problem at first glance, but due to my limited knowledge of Arduino workings I need some help. I'm trying to use button outputs from a PS360+ arcade controller. Each of the button terminals output +5V, and is meant to be connected through a button to the grounds on the PS360+.
What I want to do is have an Arduino somewhere in between the button output and ground on the PS360+, to control and animate LEDs. What I've done so far is connect the VCC of the PS360+ to the Arduino's VIN and the ground of the Arduino to the PS360+'s button ground, which powers the Arduino. I then have a button output from the PS360+ going into the button, and the button's ground is connected to an Arduino pin. That Arduino pin's mode is set to INPUT. I then have another pin with an LED which is set to the value of the input pin. For some reason, the Arduino seems to get random input from the button(Though it does seem to react somewhat to buttons presses), and the PS360+ does not recognize the button press. Setting the input pin to pullup mode has even less result, and never reads low.
Anybody got any ideas? Here's my current circuit diagram. 1P is a +5V output. I think that it's an internal pull-up pin like the Arduino's, but I am not certain. 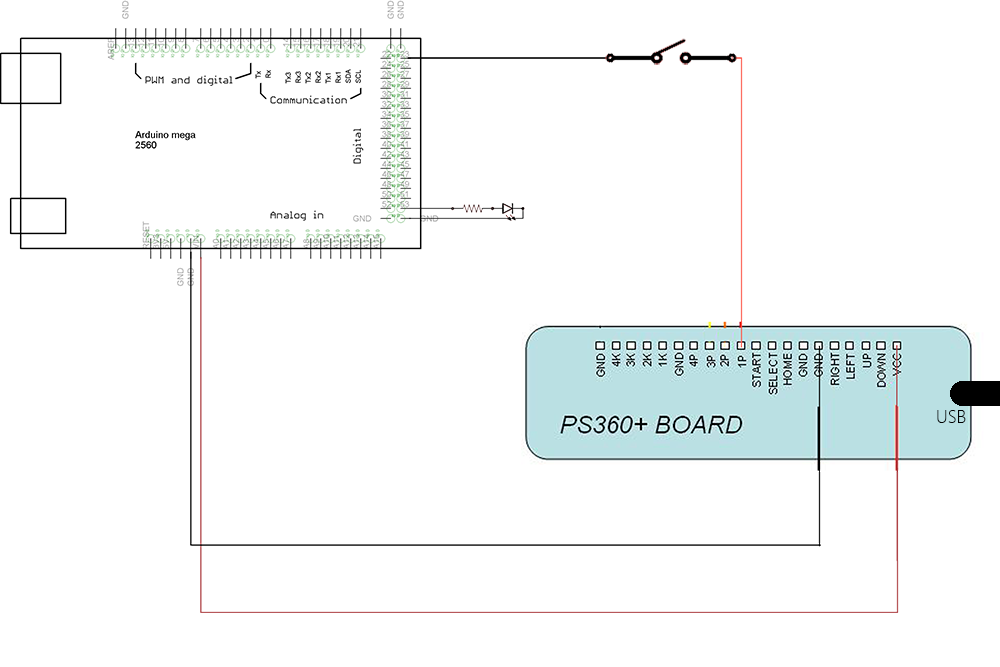 And my current code:

I think the idea of putting the arduino between the button and ground is the problem here — 1P appears to be the input for the controller button, and you can't expect to take an 'input' from the button on both pins at once.

Try connecting one lead of the button back to its ground, and the other to 1P (as it would be originally I assume). Then solder/connect another lead from the button's non-grounded pin to an arduino pin designated as INPUT_PULLUP.

This way you have two pulled-up input pins connected to the same button pin, which are both pulled low (since Arduino & PS360+ share GND) when the button is pressed.

Not the answer you're looking for? Browse other questions tagged programming arduino-mega pull-up or ask your own question.

0
Relay module and internal pull-up resistors
0
Digispark Attiny85 draws more power for digital input than expected
0
Using the LED pin for input
1
Mega 2560 does not play audio file when I want. It plays when the first condition is met, but not the other
3
AMIS30543 - Library code | Order of pinDirection and pinOut
1
Unable to use analog pins as digital inputs
0
What is happening when digitalWrite(pinname, LOW) is invoked after pinMode(pinname, INPUT_PULLUP)?